Have you ever seen shoes hanging on power lines and wondered how they got there? Or ask yourself, why would anyone throw a pair of shoes on power lines?

Shoes on power lines can pose severe dangers to the power grid, but people still do it. This article explains 9 reasons why shoes are thrown on power lines.

Why Do People Throw Shoes On Power Lines?

Shoes on a power line sometimes indicate where to buy drugs. The shoes show where the drugs are.

It’s not always the case, but some neighborhoods with high drug activity will have shoes hanging on a power line near a drug house.

The shoes allow drug dealers to give their customers a specific location by letting them know what kind of shoes to look for on the power lines above the street.

The City of Chicago confirmed that drug houses using shoes on power lines as advertising is an urban legend.

When a person dies, there is often an outpouring of grief from friends and family. This grief can manifest itself in different ways, including through the disposal of belongings.

Sometimes, people will discard shoes that belonged to the deceased on power lines to memorialize someone.

If someone is killed on the street, friends or family might throw their shoes on the power lines overlooking the spot where the person lost their life.

Shoes hanging on power lines also symbolize gang murders. Gang members use shoes on power lines to mark territory and in the memorial of fallen members.

Shoes on power lines are a way to let others know that it’s not safe to go there and that they should stay away.

This is often used in areas where gangs are present or where there have been recent incidents of violence.

It’s also a way to warn other gangs that someone is trying to take them down. This is believed to be a common practice in gangs.

Kids can be mean to each other, and bullies will steal their victims’ shoes and toss them over power lines.

Smaller kids’ shoes seen on power lines are likely an indication of bullying that is taking place in the neighborhood.

Bullies want to feel superior to their victims, and by making shoes inaccessible, bullies dominate their victims.

Bullying isn’t just isolated to kids, however. Young adults can be bullies also and take someone’s shoes to throw over the power lines to be mean to someone.

Young people in college, fraternities, or club members might get bullied and have shoes thrown over power lines.

Sadly, bullying offers one explanation for why shoes are thrown on power lines. Keep reading for more reasons. 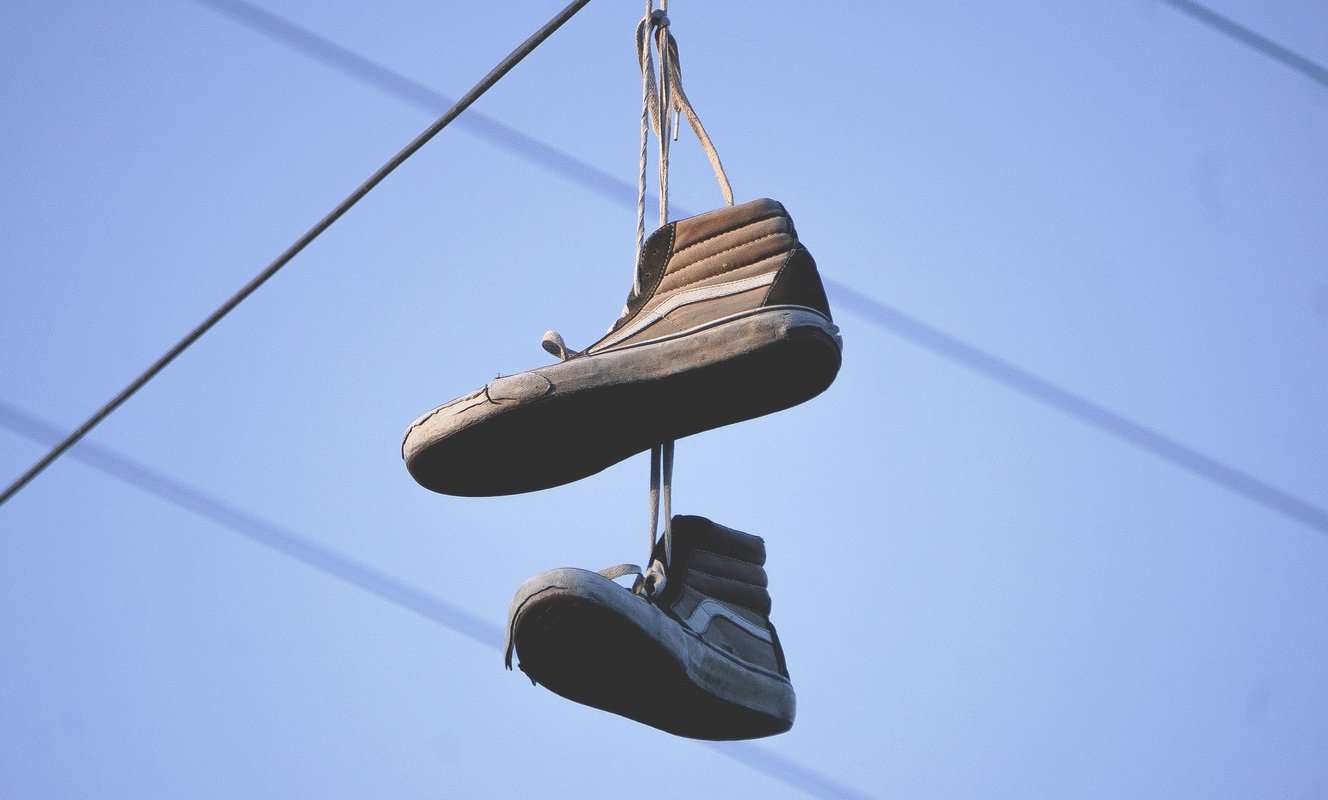 Some people toss old unwanted shoes on power lines for no reason other than to get rid of old shoes. They might not know what to do with their old shoes.

They may not even know there is a meaning behind the practice, and they want to toss out an old pair of sneakers.

A person might be frustrated at cleaning out old clothes or have too many shoes, so they decide to tie a pair together and throw them over some power lines.

Someone might be evicted and leave their shoes hanging over the power lines outside out of spite of their landlord.

Old unwanted shoes end up on power lines, and it’s difficult to say precisely how or why they got there. This explanation is the most plausible for many neighborhoods.

People toss others’ shoes over power lines as pranks. Unfortunately, the victim is usually unconscious from drinking too much, and their friends play a joke of stealing their shoes.

Someone might have a prank played on them and wake up to find their shoes tossed over a power line.

This was a way to play a joke on a drunk friend or even a drunk homeless person on the street. Someone steals their shoes while they’re passed out and throws them over the power lines.

The victim of the prank won’t be able to get their shoes down without the help of the power company or fire department.

Friends or neighbors playing pranks on each other explain some shoes on power lines. It’s not a nice thing to do to friends, and it’s pretty cruel to do to a homeless person.

When people are looking to add a touch of personality to their neighborhood, they often resort to using objects like shoes and cans as decorations.

While this may seem like a harmless way to spruce up the hood, tossing items onto power lines can cause serious harm.

Some neighborhoods are artistic and creative, so shoes on power lines are a way to express their creativity.

Artistic collectives in neighborhoods may do other things to decorate like paint sidewalks or crosswalks. Shoes on power lines represent the artsy style of the street.

The end of a school year or the end of boot camp could lead to a rite of passage, like taking combat boots tied together and tossing them on power lines.

Kids at the end of a school year toss their outgrown shoes on the power lines, or a fraternity may have pledges throw their shoes on the high lines.

Graduating seniors often have rituals and traditions performed at the end of their high school careers. Their senior tradition might be throwing their shoes on power lines.

Read More:  Why Do People Watch Movies? (9 Reasons Why)

Throwing shoes over power lines symbolizes a rite of passage for many young people completing a milestone in their life.

Athletes celebrate winning the big game with tradition, and their tradition could be to throw their cleats over the power lines on their playing field.

There could be no reason at all someone throws shoes on power lines. Someone might have been bored and had an extra pair of shoes.

People don’t need reasons to do what they do. But unfortunately, sometimes, no reason can be found, and when asked, the response is, “I was bored.”

Kids are notorious for doing things for absolutely no reason but boredom. For example, bored kids playing in the street during the summer are capable of all kinds of mischief.

Tossing shoes over power lines are one kind of trouble bored kids can cause, and it may not even be related to bullying.

Preteen boys are often the culprits. Boys who have grown strong enough to throw shoes high on the power lines. They may have seen older siblings do it.

Some kids just want to be cool and impress their friends, so they throw their own shoes on the power lines.

To learn more, you can also read our posts on why people write letters, why Gen Z is so soft, and why people hate Mondays.

There are many reasons why people might throw shoes on power lines. Unfortunately, people don’t realize the severe consequences of throwing objects onto power lines.