Why Is Pablo Picasso Famous? (13 Reasons Why) 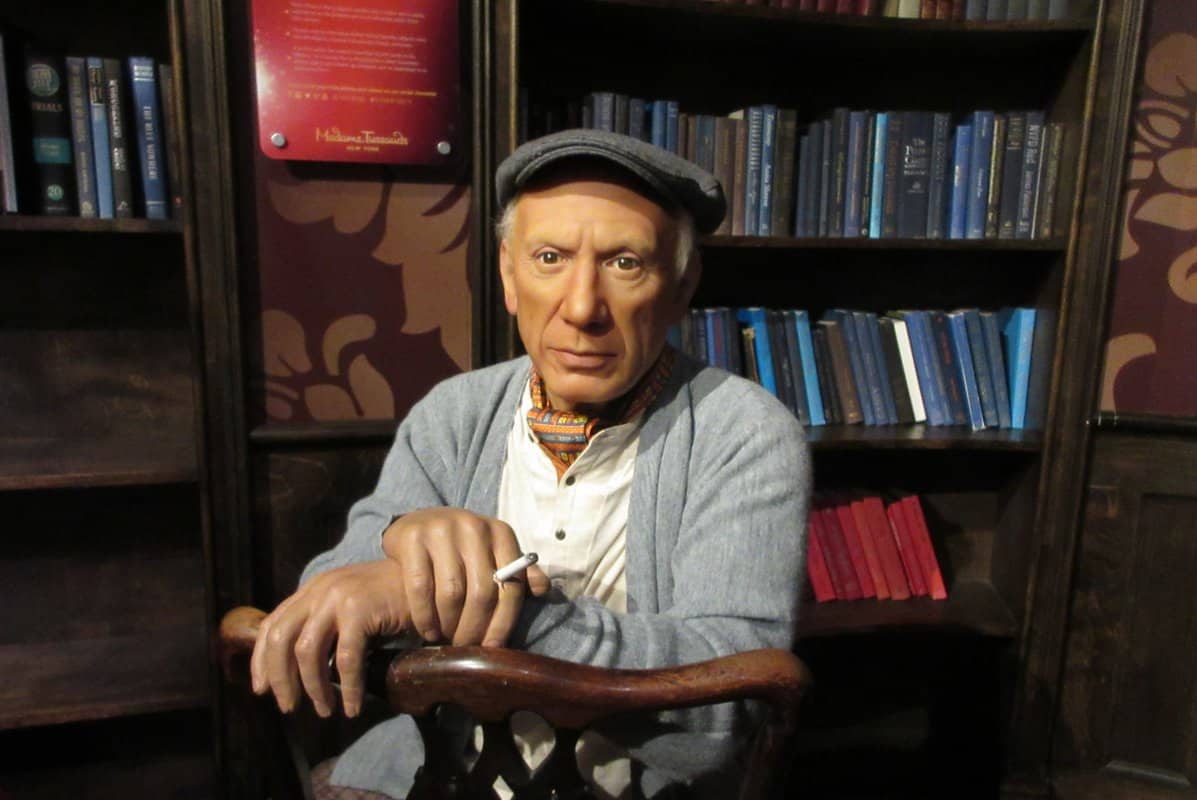 There are many famous artists in the world, but none quite as renowned as Pablo Picasso. This Spanish artist has been celebrated for his various works since he first emerged on the scene over a century ago.

But what is it that makes Picasso so special? Why is he considered one of the greatest artists of all time? In this article, we will explore 13 reasons why Pablo Picasso is famous.

Why Is Pablo Picasso Famous?

If the name ‘Pablo Picasso’ rings a bell for you, but you aren’t certain why you know him, then the simplest answer as to why he is famous would be his exceptional artwork.

This well-renowned artist from Málaga, Spain created some of the most influential works of art spanning created between 1890, when his first known painting was produced, up until his death in 1973.

His legacy consists of over 50,000 artworks of various mediums, including:

He is one of the most celebrated artists of the 20th century for good reason – his creative genius was unrivaled in his time.

2. Co-Founder Of The Cubism Movement

Picasso is arguably most famous for his role in developing Cubism – one of the most influential art movements of the 20th century.

He, along with Georges Braque, developed this groundbreaking style between 1909 and 1912, which completely changed the way that artists saw and represented objects in their paintings.

Before Cubism, artists typically painted an object as it appeared in real life, from one angle. This illusionist style was socially favored since the Renaissance.

Picasso and Braque would break down objects into their component parts and then reassemble them on the canvas, often from multiple different perspectives.

This revolutionary approach to painting opened up a whole new world of possibilities for artists who came after them.

It also forced people, then and now, to question their perception of “reality” and reconsider how it can be represented artistically.

In 1912, while working in his Cubist style, Picasso and Braque began experimenting with adding different materials to their paintings, such as newspaper clippings and bits of wallpaper.

This was the beginning of what we now know as collage art.

While other artists had experimented with similar techniques before, it was these artists who really pushed the boundaries of what could be considered art.

Their use of nontraditional materials and techniques challenged the traditional art world and expanded our idea of what art can be.

Today, collage is a widely used technique in all kinds of visual art, from painting and sculpture to photography and mixed media.

4. Contributed To The Modernism Movement

In the early 1900s, a new art movement was taking shape that would change the course of art history forever.

This movement was called Modernism, and it rejected traditional ideas about art. Instead, Modernist artists sought to create something entirely new.

They were inspired by the rapidly changing world around them and wanted their art to reflect that. Pablo Picasso was one of the most important contributors to the Modernism movement.

His groundbreaking art challenged everything we thought we knew about art and expanded our idea of what it could be.

One of the reasons why Picasso is famous is because his work defied conventionality. Despite utilizing traditional techniques in his early years of study, he quickly left them behind to develop his own style.

Picasso refused to follow the rules of art that had been established before him. In fact, he took great pride in challenging, deconstructing, and redefining Western mentalities.

This earned him a great deal of criticism in social and artistic spheres, which only fueled his desire to experiment with different styles and mediums, looking for new ways to express himself and his ideas.

Picasso’s willingness to break the rules is one of the things that made him such a great artist and has earned him a great deal of respect in the artistic community of modern day.

One of the things that makes Picasso’s work so unique is that it doesn’t fit neatly into any one category.

He was constantly experimenting with new styles and techniques, which can be seen in the wide range of paintings, sculptures, and other works he produced during his lifetime.

These works are often categorized by influential periods of his life and the style he adapted at the time.

This willingness to experiment and push boundaries of Western definitions of art, culture, and beauty is one of the things that made Picasso such an important figure in the art world. 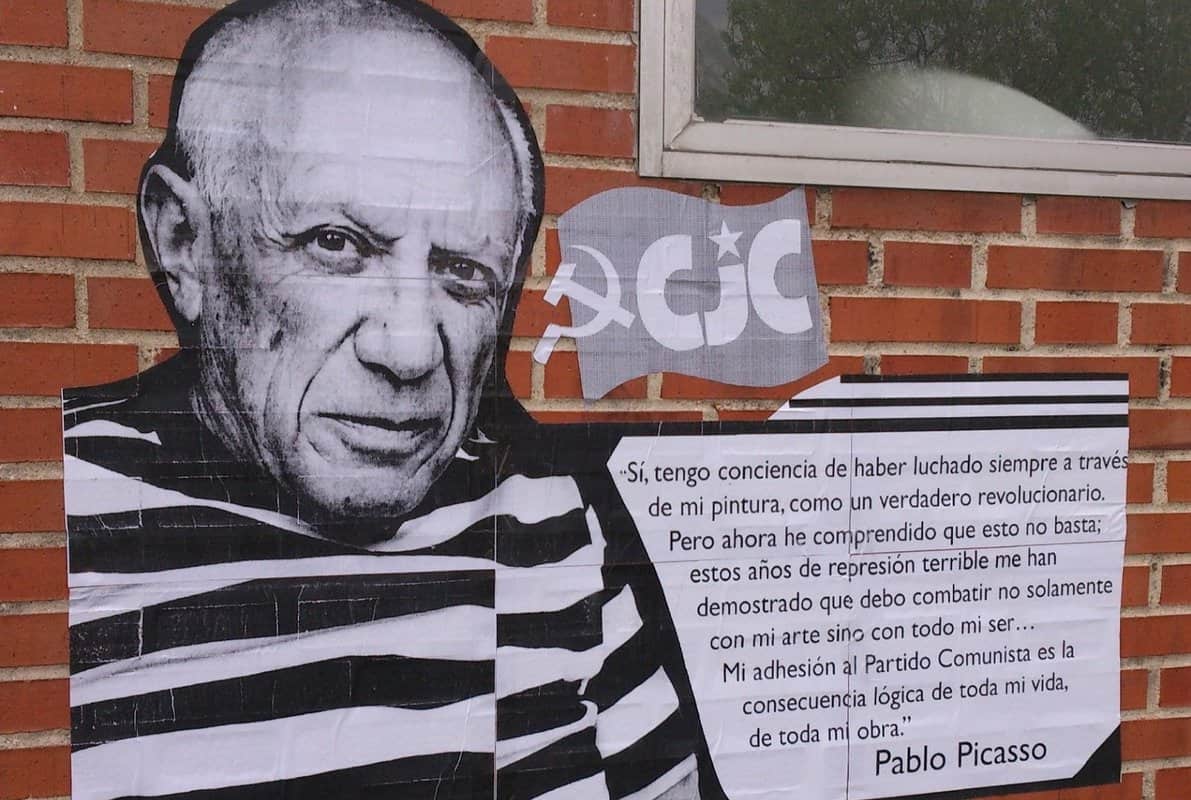 A fact about Picasso that contributes to his fame is the fact that the artist received critical acclaim at a very young age.

At the astonishing age of 8 years old, he created one of his first works, an oil on wood painting known as ‘Le Picador’ (1889), which features a man riding a horse at a bullfight.

By 15 years old, Picasso had finished his first academically recognized piece, ‘The First Communion’ (1896). This large-space oil painting depicts a Catholic girl kneeling before the altar at her first communion alongside an altar boy and, a man, and a woman (presumably her parents).

A notable element of ‘The First Communion’ is that it features a much more traditional style, demonstrating Picasso’s ability to imitate what was popular at the time.

This makes his willing decision to oppose convention all the more significant.

Pablo Picasso’s most famous painting is undoubtedly ‘Guernica,’ an oil painting on canvas that blends elements of cubism and surrealism to create a scene of profound horror.

Painted in 1937, the large-scale work was a response to the bombing of the Basque town Guernica by German and Italian warplanes during the Spanish Civil War.

The work is an incredibly powerful anti-war statement, depicting the devastation of war. ‘Guernica’ is now seen as one of the most important paintings of the 20th century.

Another of Pablo Picasso’s most famous paintings is ‘Les Demoiselles d’Avignon,’ an oil on canvas painting that depicts four women in various poses that is considered one of Picasso’s first cubist works.

While the artistic skill demonstrated in the painting is reason enough to draw attention, this painting is actually famous more for its reputation.

The work caused a scandal when it was first exhibited in 1907, due to its highly controversial subject matter.

It portrays nude women in a manner that didn’t align with the socially accepted image of feminine beauty and deemed immoral.

Picasso’s goal with the piece was to depict “sexual freedom” and challenge traditional representations of the female form and definitions of beauty.

In addition to specific pieces, like the two listed above, Picasso is also well-known for various art periods within his life, one of which is known as the ‘Blue Period’.

This was a time when he produced mostly monochromatic paintings in various shades of blue and blue-green, from 1901 to 1904 that predominantly depicted outcasts, beggars, and prostitutes.

It’s believed that the somber tones are reflective of Picasso’s state of mind during this time, as he was dealing with the recent death of a close friend, Carlos Casagemas, who committed suicide in 1901.

This was a happier time for the artist, during which he developed a newfound interest in circus performers, harlequins, and clowns.

The palette in this art period is a dramatic shift from that of the Blue Period, as it utilized brighter colors, like pinks, oranges, and roses.

It is during this period that stylistic elements that made Picasso unique start to appear, making it his most important period in the eyes of art historians.

Many of you probably know Pablo Picasso strictly for his artwork, but this wasn’t his only artistic outlet. During World War II, he turned his attention to writing poems and plays as an alternative outlet.

In addition to these plays, Picasso also wrote an estimated 300 poems. While neither Picasso’s poetry nor plays are not as famous as his art, they are still an important part of his legacy.

Picasso was a political activist throughout his life who passionately campaigned for peace throughout his career. These and other views can be clearly seen in a number of his works.

He joined the French Communist Party in 1944 and remained a member until his death in 1973. In addition to his membership in the party, Picasso was also an active supporter of the Soviet Union.

He visited the country several times and even designed a propaganda poster for the Soviet Union despite his communist affiliations and radical art style earning him a great deal of social criticism.

Pablo Picasso was a truly remarkable artist predominantly famous for his Cubist paintings, but there are many other aspects of his life and work that make him deserving of his fame.

He ultimately taught future artists to be fearless in their creativity and refuse to force their artistic ambitions and perceptions of the world to fit conventional norms.

Why Are Squirrels So Cute? (11 Reasons Why)