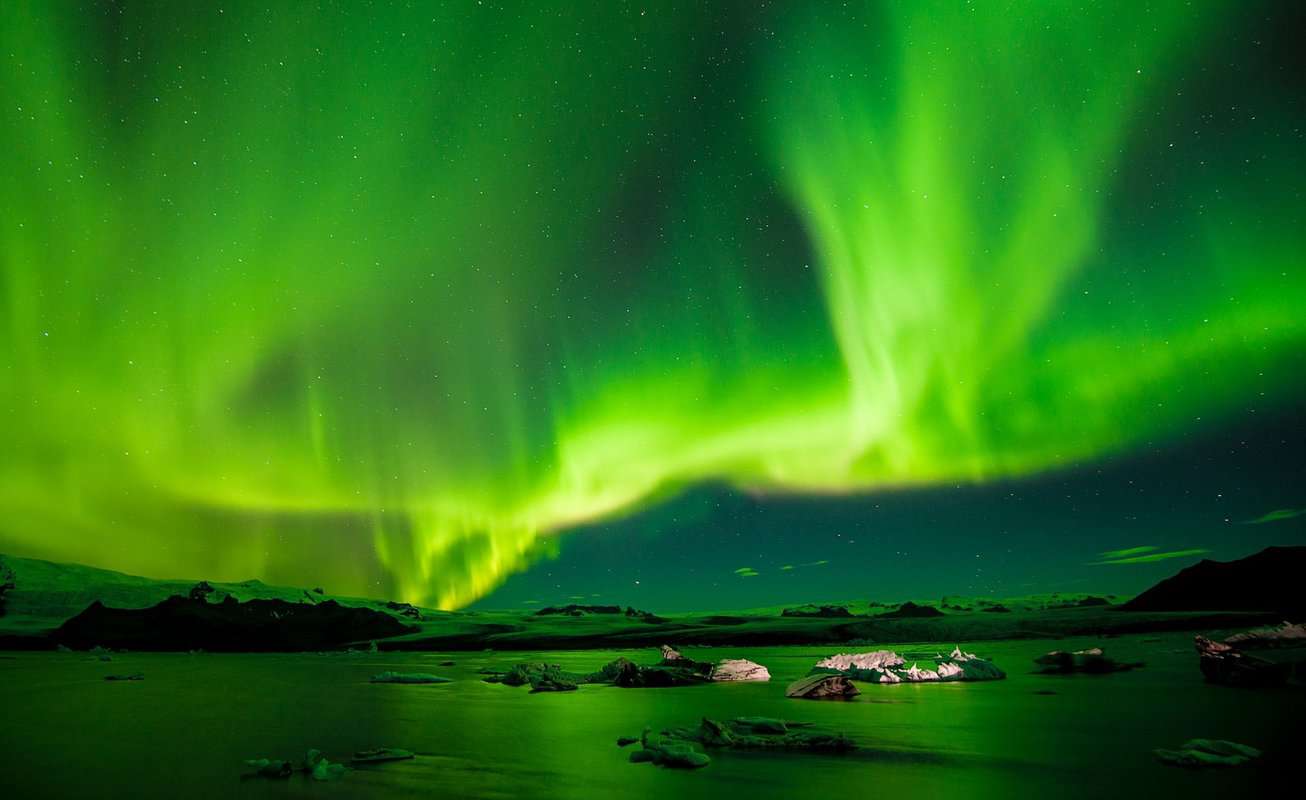 The earth’s sky exhibits many fascinating changes, from clear starry nights to beautiful cirrus clouds. It can also change colors! This might lead you to wonder, why is the sky green?

Why Is The Sky Green?

At certain times throughout the day, the earth’s atmosphere exhibits a glow due to the interaction of sunlight with air molecules. This might make the sky appear green, specifically at twilight.

To be exact, this green color happens when oxygen molecules absorb light rays. Then, the light is scattered, making for a faint green color.

However, the twilight glow can be pretty hard to catch. That’s because this glow is extremely dim. Additionally, if you live in the city, all the light pollution will further subdue the airglow.

So, if you’re on a plane, in a rural area, or camping far away, you might notice the green sky and mistake it for a rare phenomenon. Yet, this twilight glow happens every single day around the globe.

Unlike airglow, northern lights are one of the most fascinating natural phenomena that occur in certain areas only.

In fact, many people travel to the Northern Hemisphere just to see the beautiful sky marbled in green and blue. So, you might’ve been lucky enough to witness this breathtaking phenomenon!

Northern lights, also known as Aurora, happen due to the interaction of the solar wind with air molecules. Usually, this solar wind is blocked and can’t reach the earth.

However, the solar wind can get trapped around the earth’s geomagnetic poles, making for the lovely, green, shimmering, curtains that are Northern lights. 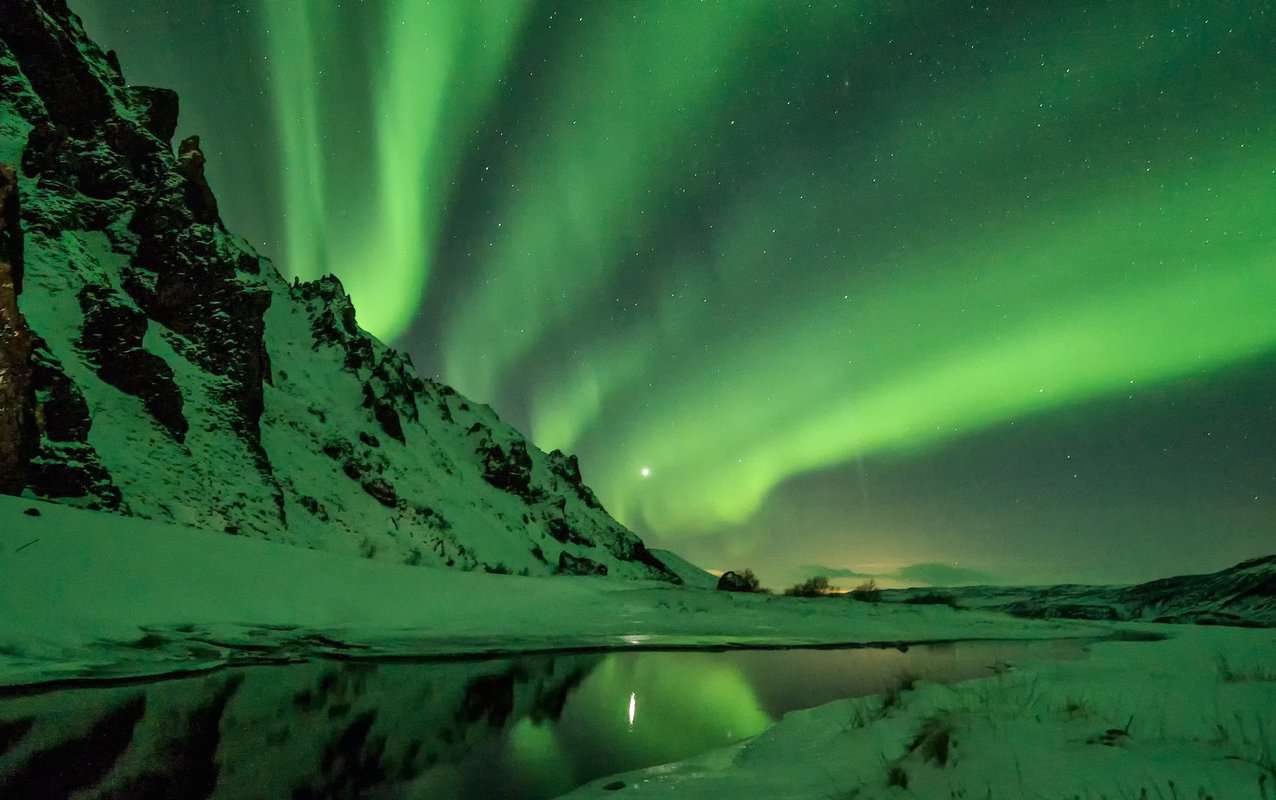 Even though it happens at an incredibly narrow timeframe, the sun’s green flash is a captivating visual that happens around sunrise or sunset.

This green flash can be seen when the sun is completely below the horizon. Meaning that it happens just before sunrise and after sunset. During these seconds, the upper edge of the sun appears to be green.

Since this phenomenon occurs for just a split second, it can be hard to catch. Additionally, to see it clearly, you need to be in front of the sea or in an open field, with completely clear skies.

The reason behind this green flame is simply light refraction. At lower levels of the horizon, the sun rays have to travel through a thicker atmosphere.

This results in the orange and yellow light being absorbed, and the violet light is scattered in the air, leaving just a green disk known as the green flash.

Your fear of thunderstorms might be doubled due to seeing an apocalyptic-looking green sky. Yet, this is a completely normal occurrence and shouldn’t be a cause for any panic.

It goes without saying that the sky’s color is due to sunlight. Naturally, during storms sunlight can get scattered, absorbed, and refracted.

To further explain, clouds can have a huge amount of moisture during a storm. So, this moisture will absorb the orange and yellow sunlight, and the rainwater will scatter the red and violet rays. This leaves only the green hues coloring the stormy sky!

In fact, this phenomenon happened recently in South Dakota. On July 5th, 2022, the sky of South Dakota turned completely green. Following this incident, there was a powerful windstorm that extended for over 240 miles.

So, the next time you see a green sky accompanied by rain and wind, make sure to stay inside as a storm might be approaching.

Pollution affects everything around us. It’s harmful to our health and everything in our environment. In some countries, the pollution level is too high to the point that it blocks a big part of sunlight and decreases overall visibility.

Additionally, air pollution has caused a lot of damage to the ozone layer that surrounds our planet and protects us from harmful radiation. So, in some rare cases of high pollution, you might notice a green tint in the sky.

Read More:  Why Do People Go Missing In National Parks? (7 Reasons Why)

What’s more, smog and smoke can discolor the air. Not only that, but the chemical in the smog also clings to plants, buildings, and even humans. It can cause a lot of damage and health issues.

So, why is the sky green?

There are many reasons that can cause the sky to be green. For starters, the twilight glow can be green, and it happens due to an interaction of sunlight with air molecules.

Also, if you were in the Northern Hemisphere, you might’ve been lucky enough to witness the stunning northern lights. The sun’s green flash is another phenomenon that looks green, but it’s even harder to catch.

Sometimes, a green sky is an alarming sign of an approaching storm or extreme air pollution.

So, unless you’re wearing yellow-tinted glasses, you might’ve witnessed a rare phenomenon.