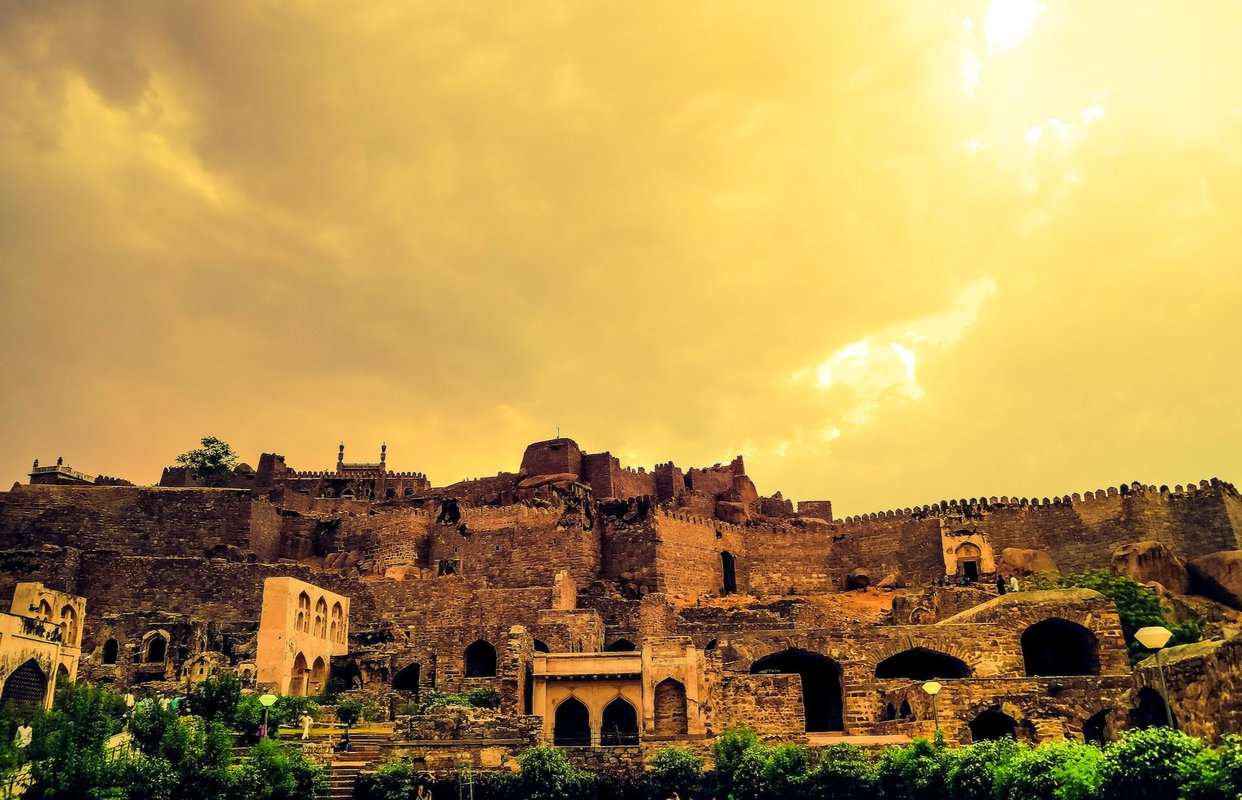 It’s widely believed that the sky is blue, which isn’t true all the time. The sky can take on different colors and hues depending on several factors. To your surprise, you may wake up one day to a yellow sky above your head. But, why is the sky yellow?

Several reasons may account for this phenomenon ranging from lovely weather to harmful pollution. Plus, it can be a clear indication of some severe weather phenomena. Read on for seven reasons why the sky is yellow. This article outlines the reasons and their implications.

Why Is The Sky Yellow?

When it comes to the color of the sky, it’s most probably because of light scattering. Sunlight gets scattered when it comes into contact with air molecules, dust, pollen, or moisture droplets.

Generally speaking, sunlight is white but carries a full spectrum of colors with different wavelengths.

Since blue and purple have the shortest wavelengths, they’re the first to scatter in the air. This leaves the yellow or red longer wavelengths to color the sky above your head.

A yellow sky is a common indicator that a thunderstorm is on the way. Interestingly, the yellowish hue is more vivid if the thunderstorm happens on the evening of a relatively warm day.

In fact, most thunderstorms happen in the late afternoon. According to the National Severe Storms Laboratory, a thunderstorm might start to form in the early evening of the previous day.

Typically, storms require the heat of the day to brew. This explains why we get most thunderstorms in the spring and summer.

Temperature plays a vital role in determining the color of the sky. Heat can cause the sky to appear yellow.

Here’s what happens on hot summer days. The heat causes the light hue with short wavelengths to scatter fast. In turn, it leaves the sky with a warm yellow shade.

This means that the hotter the day, the darker the shade of yellow can get, reaching up to the red end of the spectrum. 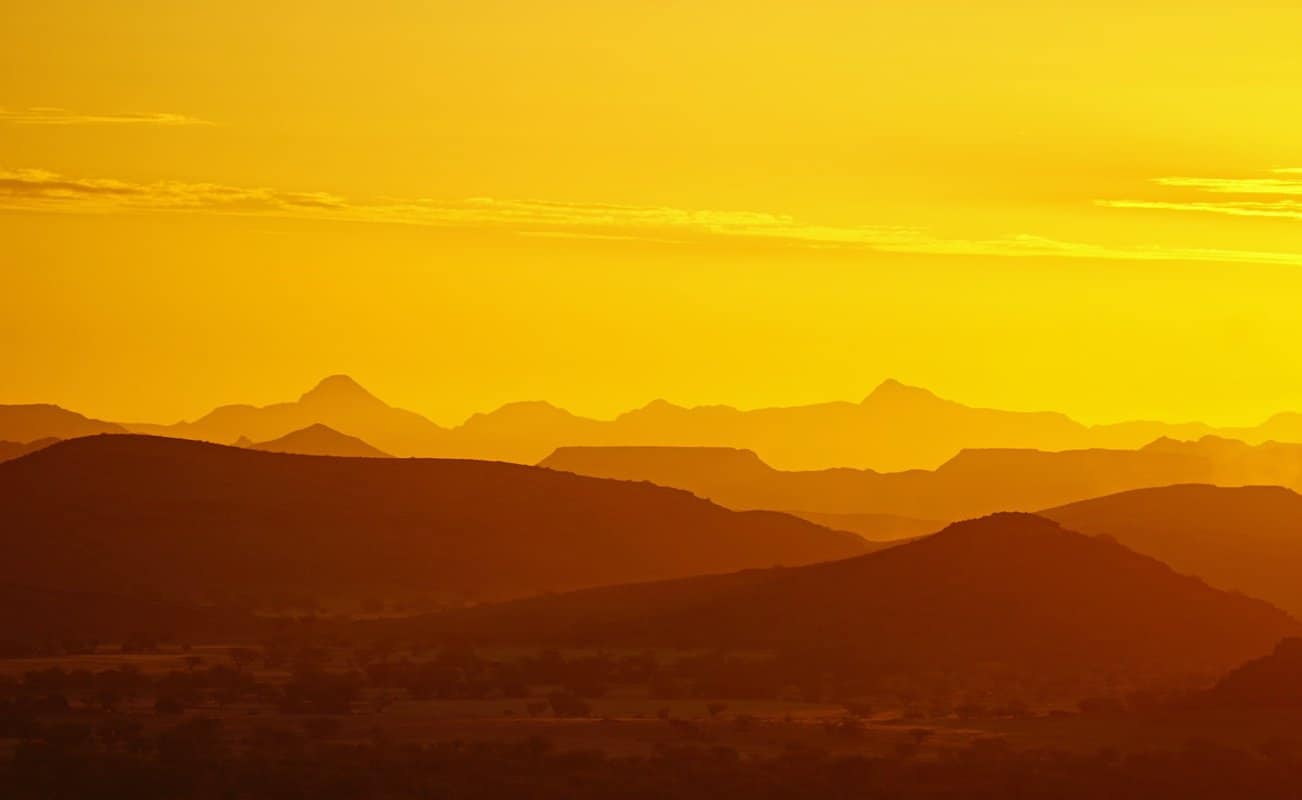 Yellow is one of the wonderful hues that form the picturesque sunset. But why does the sky turn yellow during sunset?

The yellow color of the sky at sunset is a result of the scattering of light particles. During sunset, the sun is in a low position, which means that the light rays it emits encounter a larger number of air particles.

This, in turn, causes some light rays to scatter, leaving yellow hues in the sky.

Dust is another factor that contributes to the yellow color of the sky. The influx of dust in the atmosphere can cause the sky to turn yellow to dark red.

In 2017, the sky above England was painted yellow. This was attributed to Hurricane Ophelia which brought an abundance of dust from the African Sahara to the European skies.

In fact, this occurrence isn’t unusual. it’s a common phenomenon that happens quite often.

6. Pollen in the Air

The sky turns yellow if there is a large amount of pollen in the air. For instance, a famous incident has taken place in North Carolina. In April 2019, a thick layer of pollen turned the entire sky yellow over the city of Durham.

This incident isn’t a rare occurrence. In fact, other parts of the country witnessed the same phenomenon due to the increased pollen counts of oak, birch, and pine.

Summer fog causes the sky to turn yellow. A yellow night sky is generally an indicator of good weather the next day.

Summer fog is a result of the cooling of the land after sunset. In this process, the land emits heat, sending it upward into the atmosphere.

This phenomenon is common on the western coast of the United States. The abundance of summer fog in this area is due to the difference in temperatures between the ocean and the land.

Pollution can be one of the main reasons that cause the appearance of some yellow haze above major cities. In fact, this is a common sight in the skies of Seatle and San Francisco.

In this case, the yellow hue in the sky is bad news. It means that the air above these cities is filled with smog, which is a combination of smoke and fog. This phenomenon is usually coupled with the presence of a large number of vehicles.

In addition, the air in the cities surrounded by mountains doesn’t move enough, which entraps smog and intensifies the yellow particles in the sky.

So why is the sky yellow? There can be different explanations for such a sight. However, there’s absolutely no need to panic, for it’s nothing scary.

A yellow sky is a normal sight during sunset and hot days. Besides, it can also be due to the abundance of pollen or dust in the atmosphere.

Interestingly, the sky may turn yellow at night, which can be a sign of good weather, or it can be due to summer fog that appears after sunset. Unfortunately, pollution is one of the reasons behind a yellow sky.

No matter why it takes on this color, a yellow sky is a spectacular sight at all times.