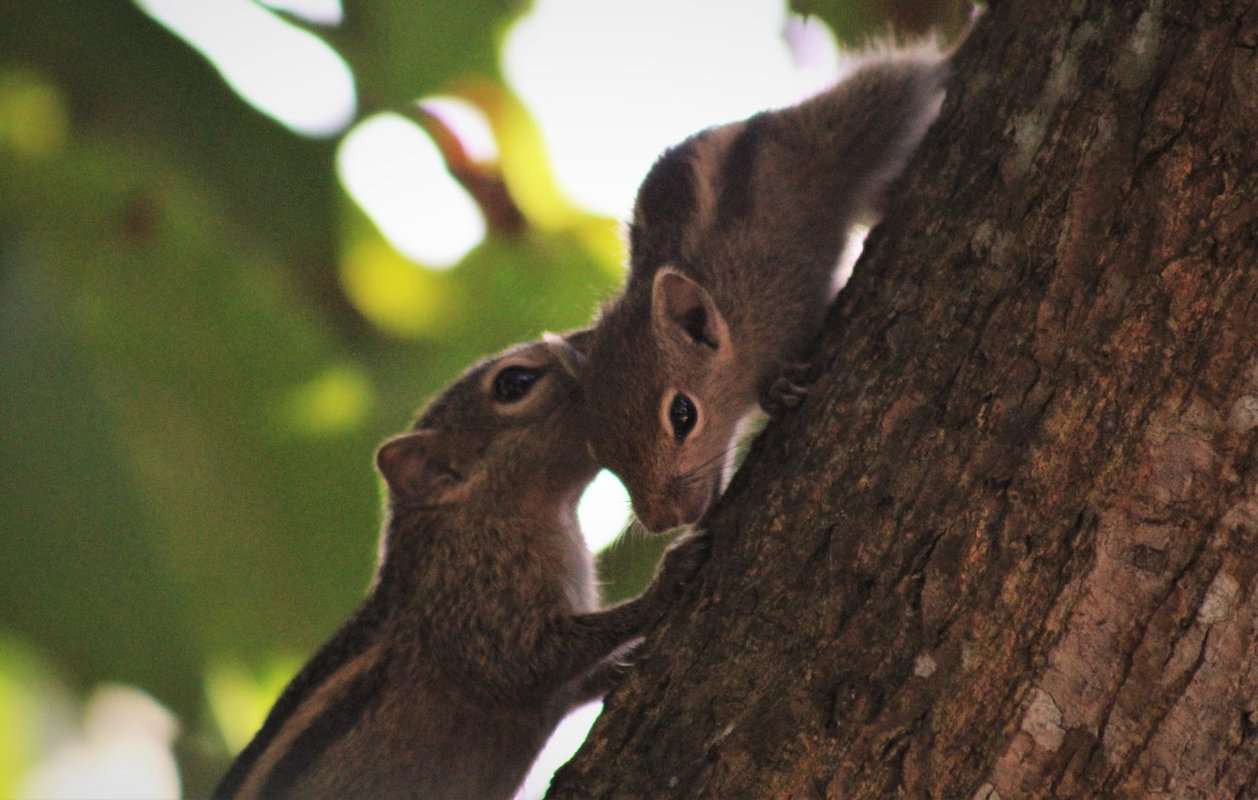 Have you ever been at the park and caught sight of a couple of squirrels running after each other across the lawn? Cute, right?

Yet, have you ever asked yourself, ‘Why do squirrels chase each other?’ It may seem like they’re just engaging in a joyful game of hide-and-seek. Though, could it be just that? Here is what I discovered!

Why Do Squirrels Chase Each Other?

There are 65 species of squirrels in the US alone. This includes big species and small, which means they have different-sized territories.

For example, one squirrel can have a couple of acres to call home, while another can have as much as 25 acres to himself! Yet, they’re not in it for the size. Instead, they pick and choose according to the quality of things in a particular area.

So, if a squirrel has managed to lay claim to an area with ample food supply and plenty of hiding places to escape predators, it isn’t going to give it up easily.

Say there’s a family of squirrels within a territory. Why would they chase each other? Food.

Not all squirrels hibernate for the winter. So, the ones that don’t prepare themselves for the cold months by stashing away a substantial amount of nuts year-round.

Then, come winter, when food is scarce, they tend to lay low. It’s their way of saving energy and making their food ration last as long as possible.

So, if one squirrel is chasing other squirrels, you can be sure it’s to protect its precious food supply.

If you see squirrels chasing each other, particularly between June and August or December and February, it could be part of their mating ritual.

It’s worth mentioning that a female ready to mate can be pursued by more than one male. So, you’ll likely see them running around the female.

Yet, most times, it’s the males chasing each other, trying to run each other out of the area so they can have the female all to themselves.

This chase can go on for several minutes or a full hour, depending on how strong the males are. Then, once the pursuit is over, the strongest male is the one who gets to mate with the female. 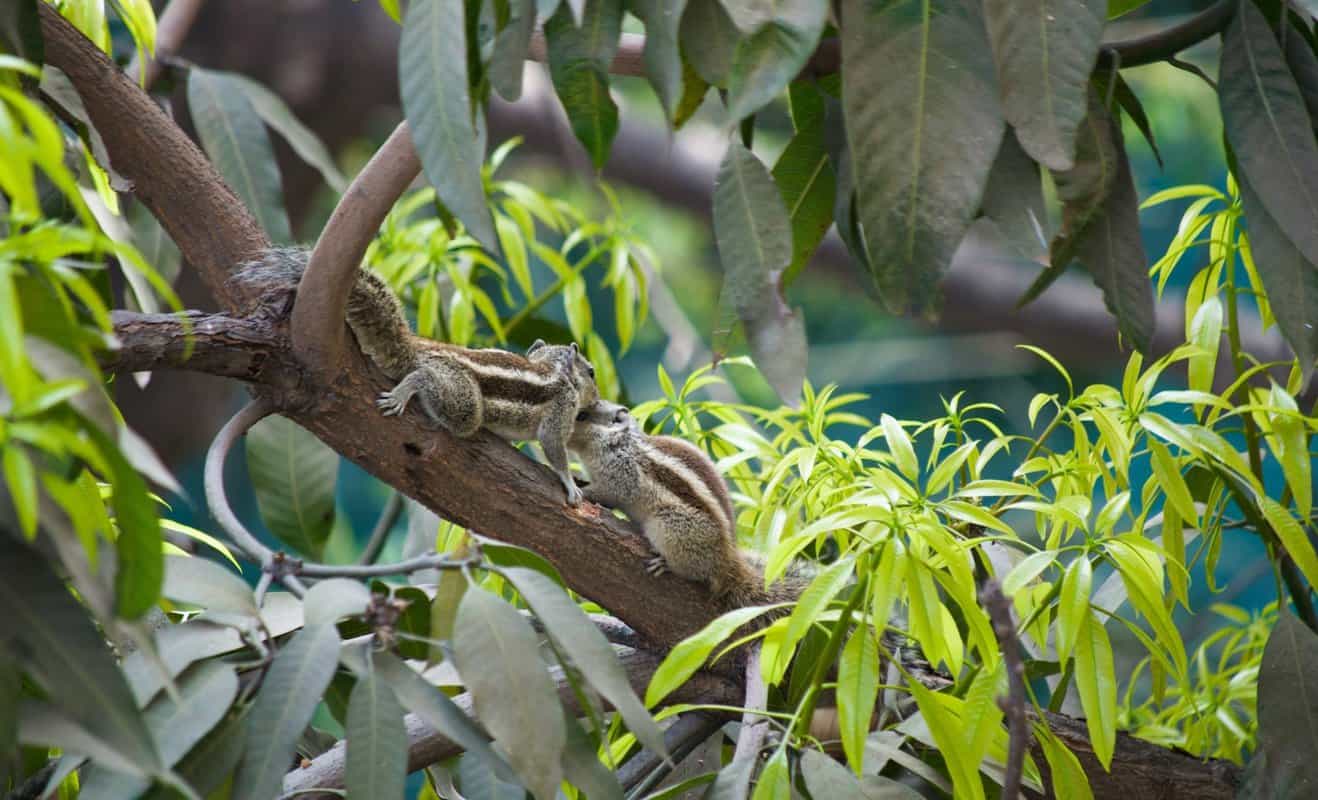 Squirrels live an average life span of 2–6 years. They reach sexual maturity when they’re between 10–12 months old and have one litter each year, giving birth to 3–5 babies at a time.

Then, as she gets older, she’ll breed twice a year: once in early spring and a second time in late summer.

So, you can imagine how many little squirrels they have running around each year. So, it’s only natural that these little kits spend their time goofing off, play fighting, and chasing each other around trees.

Not only is it fun, but it also develops their strength and coordination.

Just as with any community, there are those that will fight hard to assert their dominance. With squirrels, the strong males run around the young or weak members of their community.

They can also show aggressive behavior, such as fighting, nipping, and biting.

Squirrels can also be territorial and show dominance if they’ve just had a new litter. Again, the parents will do everything in their power to protect their young.

Whether chasing other squirrels away from their food supply or protecting their territory, all that running around also helps develop their survival skills.

They need skills like jumping from branch to branch, balancing, and escaping predators to survive in the wild.

Remember, these smart creatures will do whatever it takes to survive and protect themselves and their babies. The more they practice, the better they’ll be.

7. Building A Sense of Curiosity

Not only are squirrels intelligent, but they’re also curious. So, for example, if you make sounds similar to theirs, they’ll come near you to investigate where the sound is coming from.

Another way they use their chasing skills and feed their curiosity is if you have a bird feeder in your backyard. You’ll see them chasing one another up and around the feeder, trying to reach the food.

So, why do squirrels chase each other? They’re inquisitive, intelligent, and highly energetic, and they need to find a way to work off all that energy.

However, their chasing isn’t always cute. It’s sometimes their way of protecting their food supply, territory, or babies from other squirrels.

Also, depending on when you see these furry creatures chasing each other, it could be it’s their mating season. Then, there’s their innate sense of asserting their dominance in their community.

Still, we have to admit they’re cute no matter what they’re doing. Who can resist that cute face or busy tail?