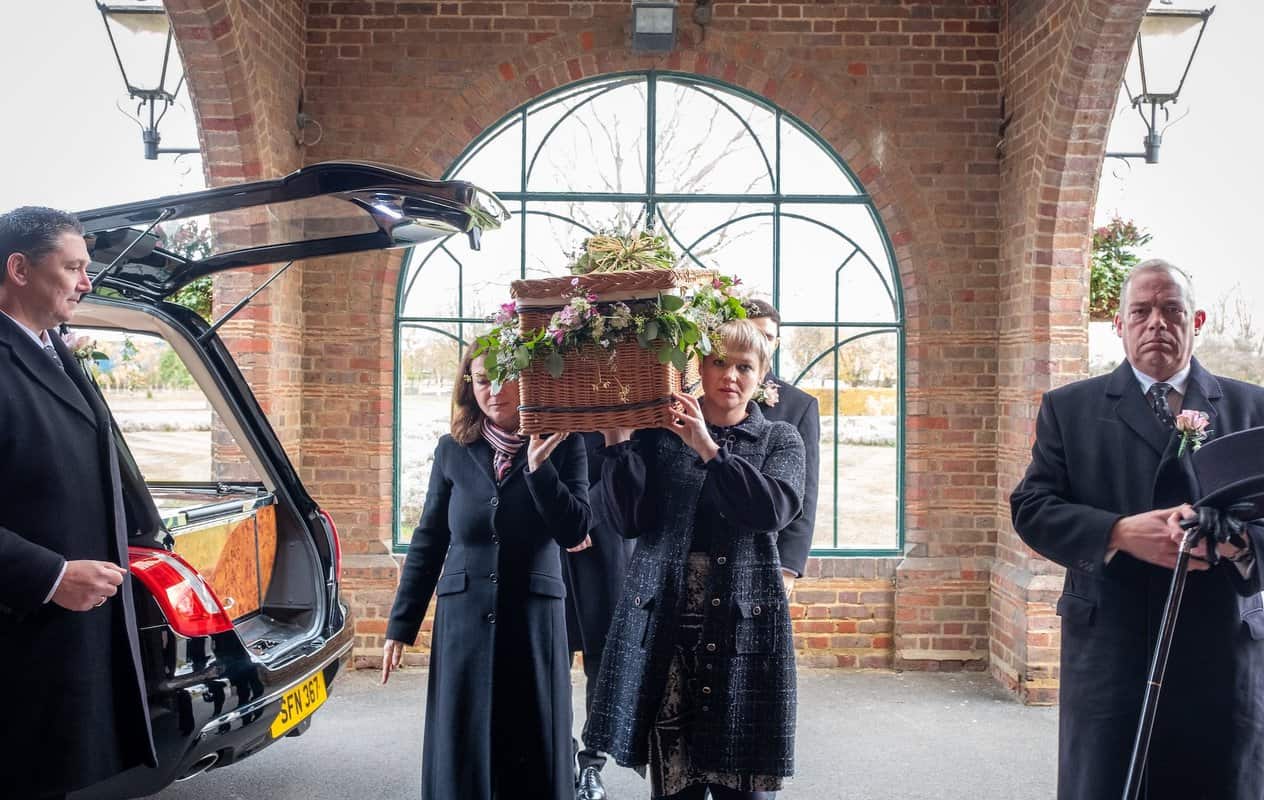 If you’ve ever attended a funeral, you may have noticed that everyone is dressed in black. This begs the question: why do people wear black to funerals?

Why Do People Wear Black To Funerals?

It may seem obvious, but one of the main reasons people wear black to funerals is to show respect.

That’s why wearing a color other than black can detract from the funeral’s solemnity. Wearing black, on the other hand, keeps the focus on the recognition of someone’s death.

It’s worth noting that some cultures and religions wear colors other than black to funerals. Sikhs in India, for example, wear white to funerals. Wearing white wouldn’t be disrespectful given that it’s part of their customs, but wearing other colors would.

In many cultures and religions, black symbolizes mourning. In the Jewish community, for example, the color black is the traditional color of mourning.

3. Tradition from the Roman Empire

It’s believed that the association of the color black with death and loss originated from the Roman Empire.

When mourning, ancient Roman families would dress in dark togas and robes. This custom continued into the Middle Ages when mourning garments were described as “somber.”

Mourning customs have evolved since then, but wearing black has remained in the modern funeral tradition.

4. Laws from the Middle Ages

In the Middle Ages, it wasn’t just customary to wear black to funerals; it was mandatory. At the time, the Catholic Church mandated that all mourners wear black.

Under sumptuary law and strict protocol, the Catholic Church ensured that people of various statuses followed guidelines during and after the funerals of people of high social status.

That said, wearing black and mourning garments was mostly reserved for people of high status. This decision was made to keep lower-class people from imitating royalty and aristocrats. In any case, because black dye was expensive, commoners couldn’t afford to wear black clothing.

Even though it’s not mandatory anymore in Catholic churches, many Catholics still choose to wear black to funerals.

People have been indeed wearing black to funerals for centuries. Still, this funeral custom didn’t gain popularity until the death of Prince Albert in 1861.

As a symbol of her bereavement, Queen Victoria wore black until her own passing 40 years later. That’s why people in the Victorian era started wearing black for significant periods after their partners passed away.

Wearing jet-black jewelry was another popular mourning custom during the Victorian era. It was a symbol of bereavement and remembering loved ones.

All of these customs, however, were mostly reserved for the upper classes. Working-class people could still not afford to wear black-dyed clothing. 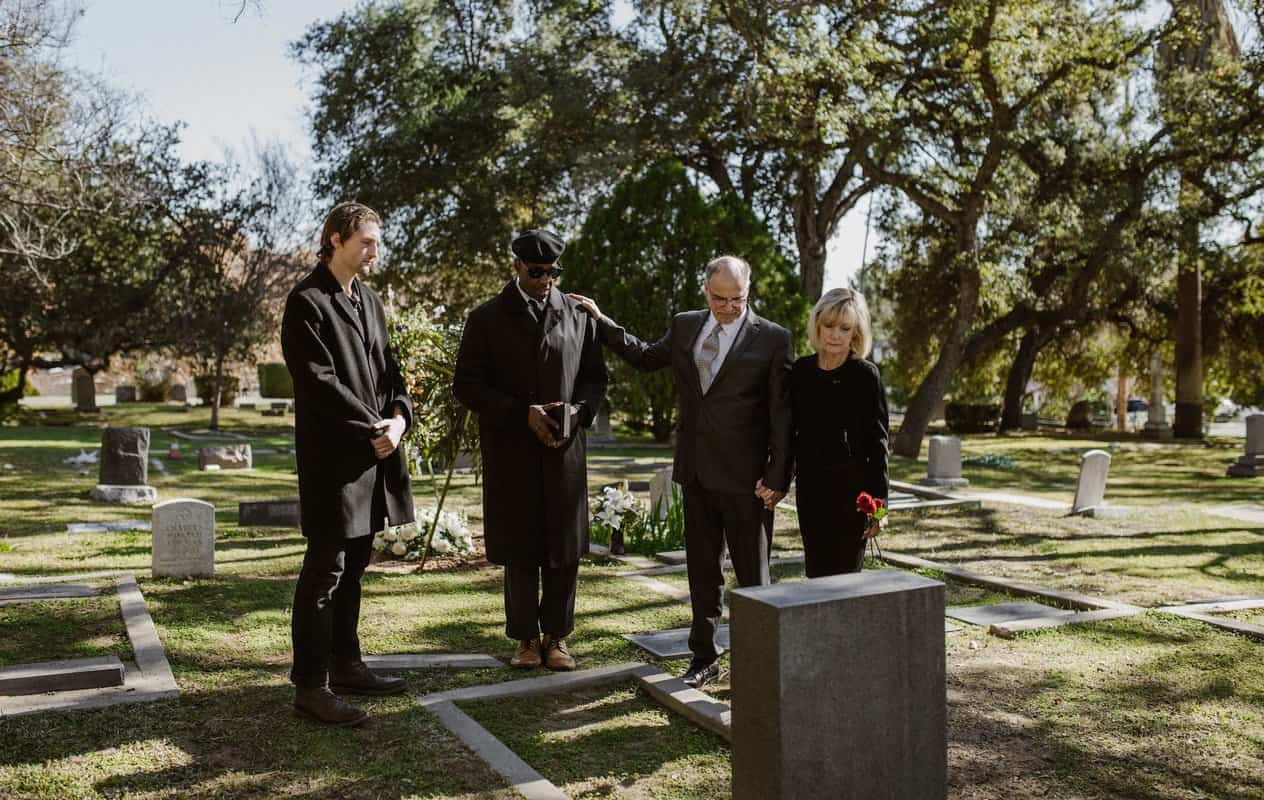 Wearing black to funerals carried on from the Victorian era and has since become a standard funeral tradition in the Western world.

As manufacturing technology improved, the market for mourning attire created a variety of dress styles to fit various mourning periods.

Even women’s magazines would devote columns to mourning etiquette, such as what to wear and how long to wear it based on your relationship to the deceased.

Eventually, inexpensive black clothing became more widely available. As a result, the working classes began to wear black to funerals and during mourning.

7. Symbolism of the Color Black

In color psychology, black can represent elegance and sophistication. What’s more, the color black can elicit emotions such as sadness and anger. Such symbols are fitting to the somber mood of funerals.

Wearing black to funerals not only shows respect but also shows support for the deceased’s family and close friends. It expresses a shared sense of loss and grief.

People gather in this manner, creating a solemn but not morbid atmosphere. In a way, wearing black honors the loss of a loved one while also reminding us that we still have each other.

Because death is inevitable, it’s the ultimate truth of life. Still, most people go on about their daily lives unaware of this fact.

For many people, wearing black to a funeral symbolizes the acceptance of death’s finality. The act serves as a reminder that life is fleeting.

Wearing black to a funeral can show that you respect the deceased person’s culture or religion by dressing appropriately. Doing so shows that you have good etiquette even if you don’t follow any religion or culture.

Read More:  Why Do People Believe In God? (13 Reasons Why)

In the Western world and many other countries, wearing black to funerals is customary. That’s why our general perception of funerals is of people dressed in black.

However, in South Africa, for example, it’s customary to wear red as well as black to a funeral.

11. To Ward off Evil Spirits

Some people may wear black to funerals for superstitious reasons rather than cultural or religious ones.

It’s not a widely held belief, but some people believe that wearing black to a funeral will help ward off evil spirits.

When someone dies, they’re said to attract evil spirits and ghosts. However, wearing black makes it difficult for these spirits to attach themselves to the person who passed away.

Wearing black also protects them from supernatural harm during funerals and mourning.

Why do people wear black to funerals?

There are numerous reasons why people wear black to funerals. From history to tradition, wearing black to funerals has always served one purpose: to show respect and solidarity to the bereaved family.

Just keep in mind that people from different cultures may dress differently for funerals. Some people may also choose a specific color for their funerals. So, regardless of your tradition, it’s critical to arrive dressed appropriately.

Why Do Hamsters Die So Easily? (9 Reasons Why)

Why Do Spiders Exist? (9 Reasons Why)