Why Do Peacocks Spread Their Feathers? (5 Reasons Why) 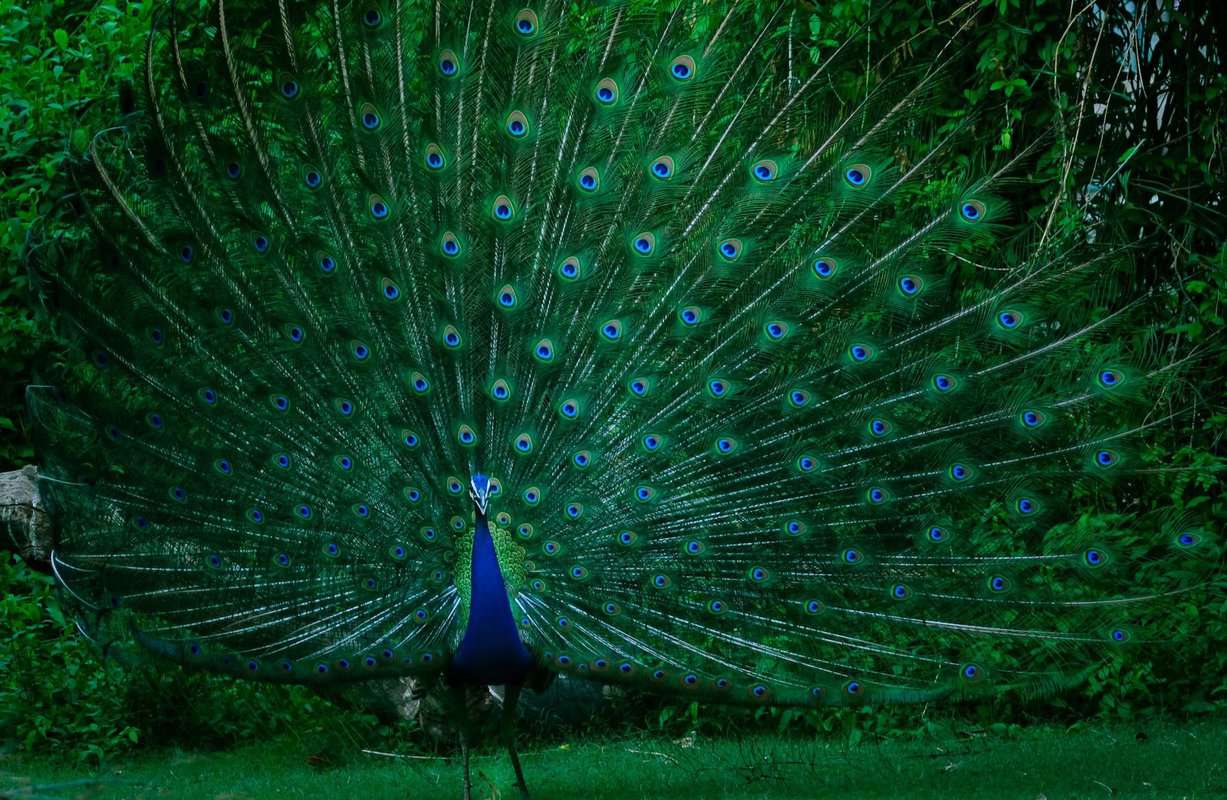 Did you know that it takes a peacock three years to develop its beautiful feathers? At birth, both male and female peachicks look identical. The male would start the color grading around three months and reach full maturity three years later.

So, why do peacocks spread their feathers? There are several reasons and meanings for this behavior. They include mating, communication, and aggression.

Why Do Peacocks Spread Their Feathers?

Believe it or not, every peacock features a distinct pattern of “eyes-pots” and colors throughout its feathers. These colorful patterns make every peacock not only beautiful but also unique.

Contrary to popular belief, peacocks don’t spread their tails as an act of pure vanity. On the contrary, it’s instead a part of their mating rituals.

In the world of peacocks, the males have to impress the females. In fact, a successful peacock can lure an entire harem of five peahens using only his tail.

In a lek, a male typically spreads his tail feathers into a semicircle around his body to show it off to females. The distinct patterns and size of the tail make it easier for the female to choose a mate.

Typically, females pick the one that carries the best genes to be passed on to the babies. So, generally speaking, a peacock with a more vivid pattern and a larger tail has a better chance of being picked by females.

Scientists have also noticed a threshold for the preferred tail size. When the peacock’s tail crosses a certain size threshold, the females might choose the peacock with a more humble size.

It’s still unclear why females do that, but it occasionally happens regardless.

2. To Ward Off Predators

The forest is a peacock’s natural habitat. Therefore, it’s likely to have several natural predators, such as:

Peacocks should always be on their guard. Therefore, they fan out their tails in an attempt to scare predators. Spreading their feathers makes them look bigger, thus more intimidating.

Some people may wonder why the peacock wouldn’t just fly away. It’s a bird with wings, right? Others may counter that argument by saying that peacocks can’t fly.

The truth is, peacocks can fly. However, they’re not as graceful nor as skilled as other birds. In fact, a peacock would spend around 2% of its entire lifespan in the air, and it’s mostly just to travel somewhere else.

As a result, the peacock doesn’t have the muscle memory to fly away when detecting danger like other birds. So, it must rely on its tail to get the job done. 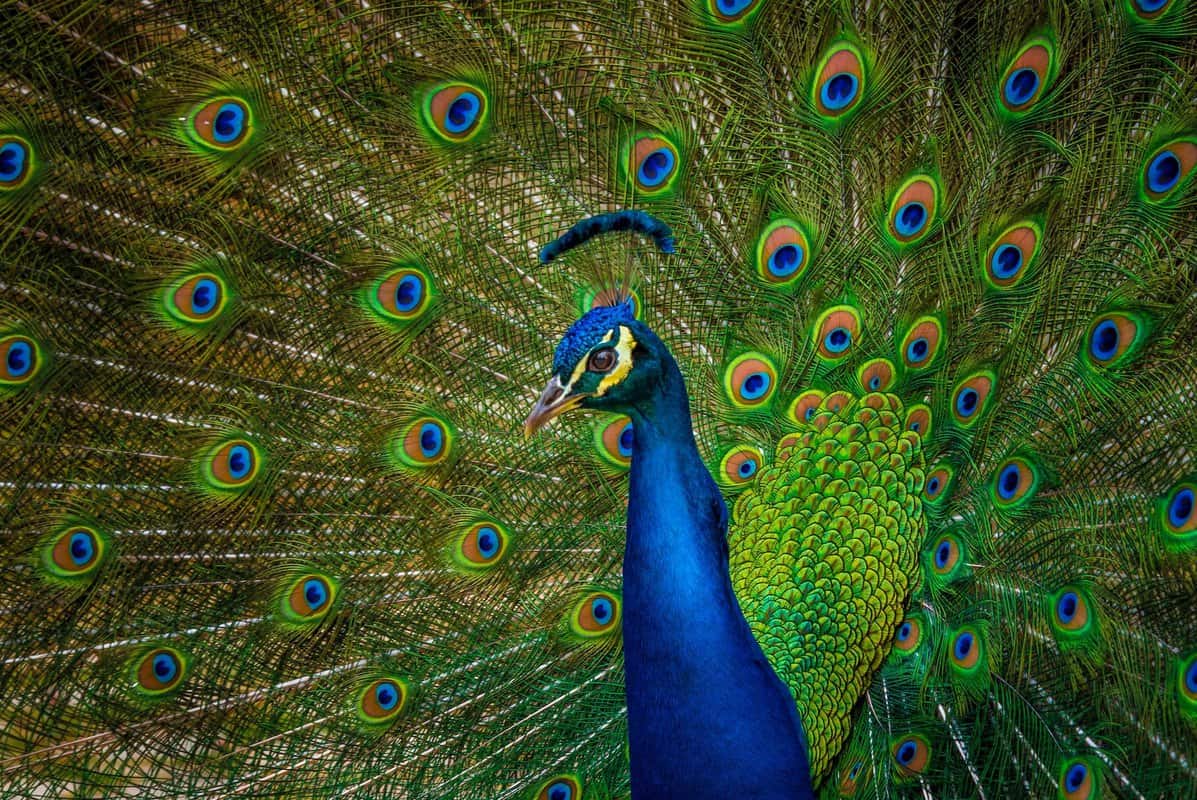 Interestingly, peacocks spread their feathers to create sounds called rattling. these rattlings can be meant to communicate courting messages or halt the approach of predators.

You might wonder, how can the same sound attract a creature but repel another? The answer is simple; it depends on the intensity of the sound that the peacock emits.

When a peacock spreads its tail, the intensity of the rattling can either sound gentle and soothing or be aggressive to warn off a predator or even lung at them.

Also, researchers believe that the vibration of a peacock’s feathers emits short-frequency sound waves that their predators may fear.

Unlike other birds, peacocks rarely demonstrate aggression towards other peacocks during ostentation. They’d rather attack without warning. Peacocks would aggressively defend their little territories during the competitive mating season.

However, their aggression is almost always targeting humans. In fact, peacocks sometimes spread their tails for humans to warn of an upcoming attack.

So, while you can admire a peacock’s beauty as it demonstrates its tail, it’s best to keep your distance and refrain from making sudden movements.

Have a look at this video of a peacock as it spreads its tail as a warning in response to multiple people around him.

The cameraman failed to detect the warning signs and got too close to the peacock. Because of that, the peacock lunged forward at the cameraman.

Peacocks take great pride in their beautiful plumage and have every right to do so. They’re uniquely pretty with large colorful patterns.

Unlike peahens, that spread their feathers only occasionally, peacocks like to put on a show and display their beauty. People have observed peacocks displaying their tails sometimes for no apparent reason.

With feathers that beautiful, why not show them off?

Why do peacocks spread their feathers? There are five reasons why peacocks do that. The most important is that they do it to impress the ladies during the mating season.

Peacocks take great pride in their beautiful patterns and often show them off. They also use them for communication, to scare off predators, and to show aggression.

No matter why they do it, you’re lucky if you ever caught sight of such beautiful tails on display.

Why Do Men Wear Cologne? (9 Reasons Why)