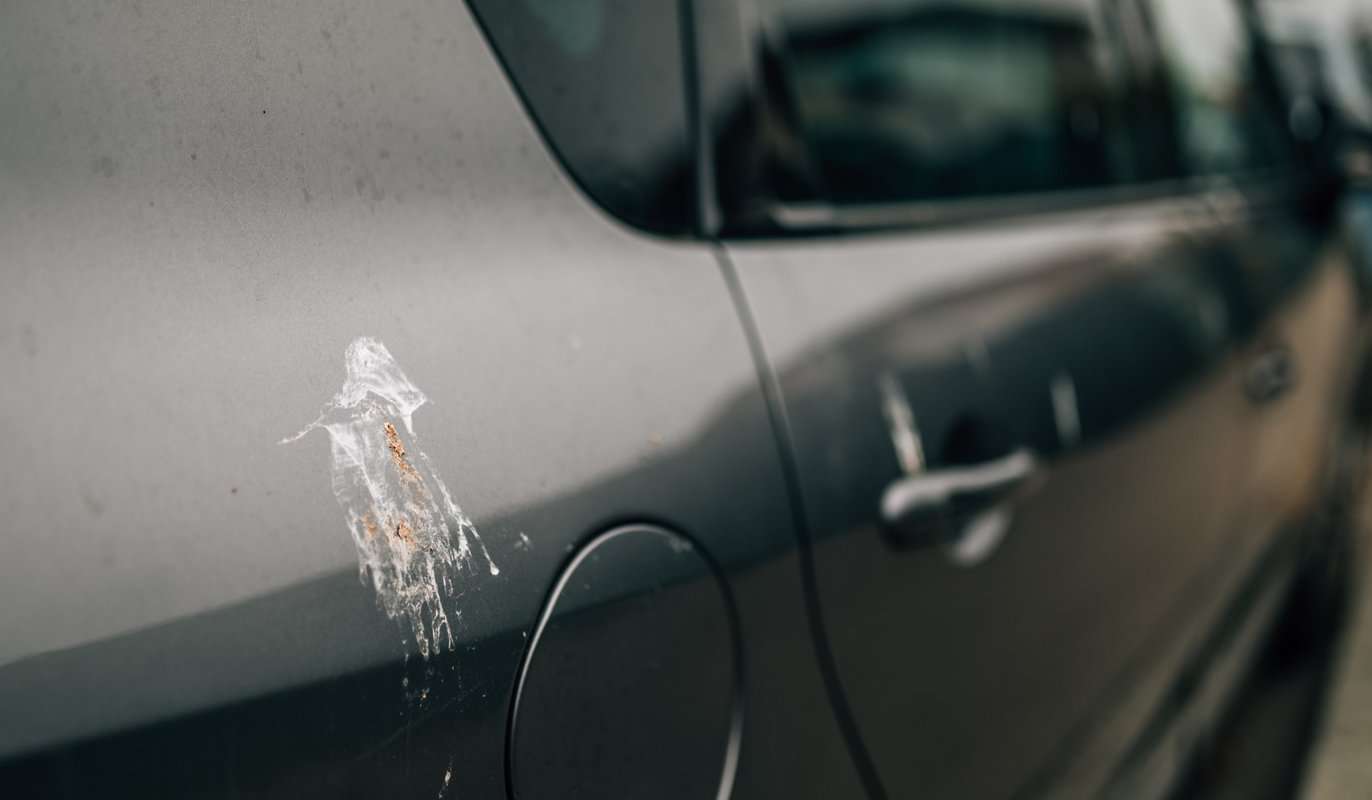 We all know that birds need to poop. But why do birds feel the need to poop on our cars? Well, believe it or not, it just doesn’t happen by accident.

Birds are indeed attracted to cars especially, and it’s not a coincidence that your vehicle ends up covered in poop. Here are the top nine reasons as to why.

Why Do Birds Poop On Cars?

1. The Paint Reflects Them

Birds are… not that smart. In fact, they are known to attack their own reflections frequently, especially during the breeding season, thinking it’s a rival bird.

This means that when birds see their own reflection on the shiny paint of the car, they attack it with everything at their disposal – and that includes their poop.

This makes black cars particularly vulnerable for this reason, as black is very reflective.

2. The Colors Excite Or Threaten Them

Something interesting to note is that certain colors of cars are more likely to receive poop than others – and they all get pooped on for different reasons.

For whatever reason, birds are attracted to colors which match their own plumage. Perhaps it reminds them of their own kind.

This means that if a bird spots a car which matches themselves, they are likely to find shelter nearby and stay there – maybe even until they need the bathroom.

Birds often poop directly into water when they can find it:

The reason that they do is thought to be because when they poop into water, it disguises the smell of their leavings, which means they are harder to find for predators.

Unfortunately, a combination of a blue car, with shiny paint, maybe some fresh rainfall still wet on its surface and a birds’ poor eyesight means a lot of pooing on cars. 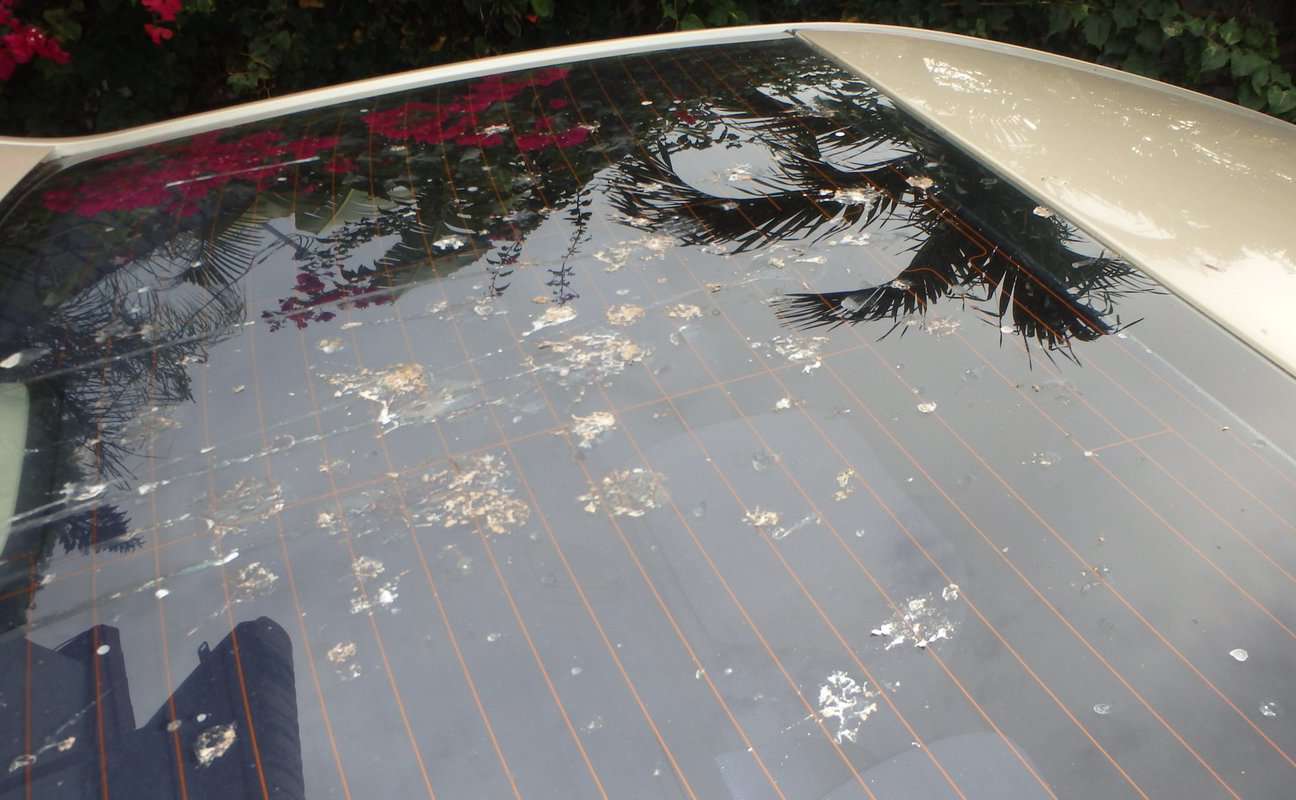 Cables have become a bird’s favorite hangout in the cities, and when they roost and get comfortable, they just make droppings wherever they do.

They may roost on any kind of wires:

If you keep finding bird poop on your car, then you might want to look up and see if there’s anywhere wire-free you could be parking instead.

Unfortunately, parking in a more natural area doesn’t free you from the birds either. In fact, you might even be in more danger of that.

Birds will more readily roost in trees than on wires. They make nests and more permanent structures in trees, rather than just resting on the wires.

That means that even if your car is green, parking under a tree is bird poop heaven.

Did you think you could park away from trees and wires would keep your car free from bird leavings? Think again!

Whilst wires are the most likely to become home for birds in cities, buildings are not safe either, and if the edge of the building juts out into the road and you park there…

When we say ‘buildings’ we mean all kinds of structures in inner cities, which could include:

Basically, if a bird can rest on there, it’s likely some poop will follow if you leave your car there for any length of time.

Essentially, if you would like to keep your car dropping free, then what you need is a parking space that has nothing but clouds overhead.

8. Getting Stressed Or Scared

Any real stimulation for birds can cause them to poop. It can be anything:

This means that almost anything can make a bird poop out of stress.

Seeing their reflection and thinking they’re a rival? Poop. Hearing a lot of other birds singing and marking their territory? Poop.

Excited for a love interest bird? Poop. Seeing a car beginning to park under their roost and interpreting it as a threat? Poop.

They are most likely to be frenzied around the breeding season, which is something we as humans have no control over.

However, ironically, you might be able to protect your car from bird poop by scaring them even more.

To prevent bird poop, you might want to try some of these methods:

If they see any of these, they won’t dare to roost over your car, let alone poop on it.

Although a bird may poop in water so predators are not able to find them easily, if a bird decides to make a place their permanent home, they may claim the territory.

Typically, this happens after a bird has:

Unfortunately, if you park in the same place every day, and a bird has made their home above your car, you can expect a lot of droppings left behind.

To learn more, you can also read our posts on why a bird would fly into your car, why crows follow you, and why fruit flies follow you.

Birds poop on cars for many reasons, but it can be broken down to three main factors as to why: the color of the car, your parking space and the stress and excitement of the birds.

There is not much you can do about the birds’ temperaments, but if you would like the smallest chance of poop, choose a clear parking space and a green car.