Why Are Capybaras So Chill? (7 Reasons Why) 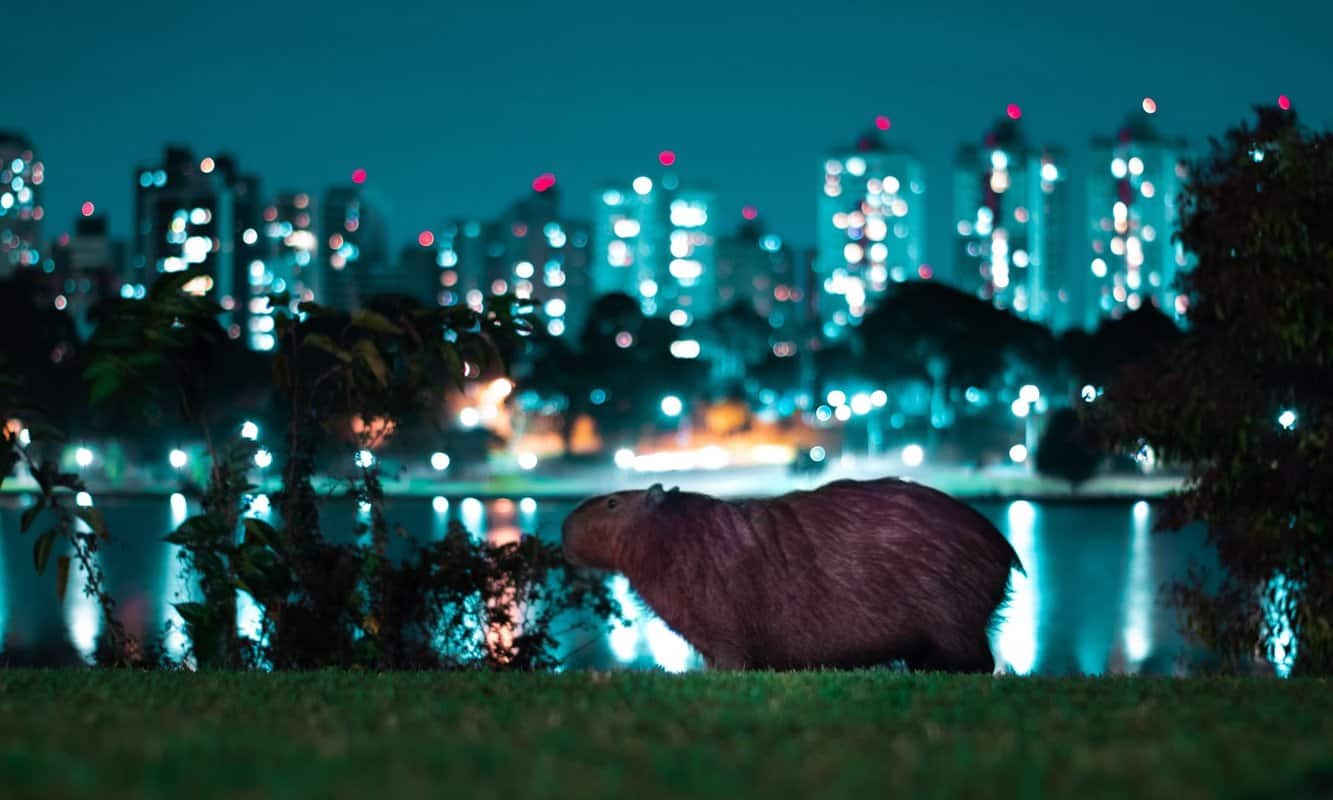 Capybaras are extremely relaxed animals that are adored by other animals and humans alike. Because of this, capybaras can make incredible pets in some places.

But, what is it about Capybaras that make them seem so chill? Continue reading below to find out why and more.

Why Are Capybaras So Chill?

Capybaras love to be around other animals, as well as humans. They tend to hang out in large groups and do not like to be alone, so they are very social creatures.

The young capybaras like to wrestle, chase each other, and gallop in groups. Capybaras are gentle creatures who are also very intelligent, which lends to their chill nature as well.

The capybara’s compassionate nature makes them a favorite among orphaned animals as well. Capybaras have often been known to adopt stray animals into their families.

Capybaras, known for being one of the friendliest creatures in nature, have been photographed lounging with crocodiles, a natural predator to most animals.

This means that capybaras are rarely ever annoyed when other animals lounge on them. Some people lovingly refer to the capybara as “nature’s chair”.

Capybaras mainly live in South America but you can find some located in various zoos in the US, some have petting areas where you can even interact and snuggle with capybaras.

Some of the zoos offer you the chance to not only pet and play with the capybaras but swim with them as well. Since swimming is their favorite activity it is a great way to bond with them.

Most of these zoos do require that you call and make an appointment in order to meet and play with the animals. You can usually make these appointments easily online.

You can also adopt a capybara at an exotic pet site or store for a fee of around $2500.00. Be sure to check your city or county rules on exotic animals before adopting. 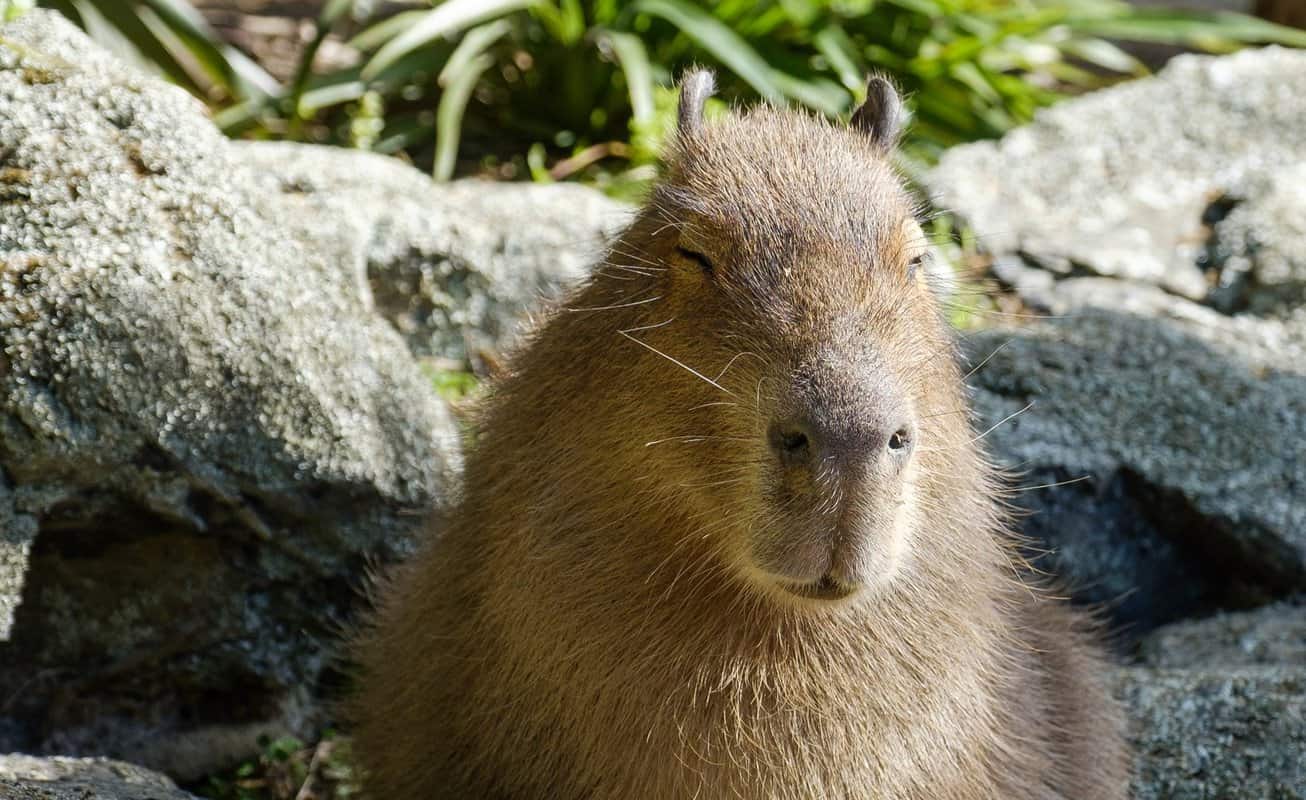 This can be anything from a human friend to snuggling up to a group of sleeping turtles or letting birds rest on their backs. For them, it doesn’t matter, as long as you are friendly.

It is said that capybara is so cuddly because they have their own sense of inner peace which radiates out. Animals pick up on that peace and the capybara’s kindness and snuggle right in.

This means capybaras do not chase or hunt other animals, allowing them to live calmer in their day-to-day lives.

Their food is lush green leaves and grasses which are normally found around the waters the capybaras play in. Capybara eats 6-8 pounds of grasses and leaves in a day.

In the dry season, when the grass is not as lush and plentiful, capybaras will also eat reeds. Another food choice for them is fruit and bark they strip off of nearby trees.

Capybara pups start to eat grass at about a week old. However, they do continue to drink “mother’s” milk, which they will get from any female in the group until about 16 weeks.

Unfortunately, the capybara is also known for eating its own poop. It contains beneficial bacteria which are necessary for breaking down the fiber-filled grass.

Swimming cools and reduces thermal stress caused by a low amount of sweat glands. This allows capybaras to relax quite a bit.

Capybaras have very dry skin so being able to swim often helps to hydrate. They are also prone to sunburn and swimming helps to cool the skin itself.

Capybaras have been known to hold their breaths up to 5 minutes underwater, helping them hide from predators when needed. Their fatty tissue also makes them excellent at floating.

Capybaras have even been known to sleep under the water. They poke their snouts up out of the water in order to continue breathing.

Because capybaras live in groups or families, they are used to being around other animals, interacting frequently through playing and cuddling or grazing and swimming together.

Capybara families consist of 10-20 animals with most families having a dominant male and 2-3 similar-aged females along with their offspring. Larger numbers allow them to feel safe from predators.

When predators do approach a family they form a circle around the young, facing out toward the attacker. Between their growls and their rather sharp teeth, capybaras can be quite intimidating.

When in groups they can also be quite “chatty” by making lots of clicks and noises. The clicks they make are mostly used as a form of communication to other capybaras while searching for food.

To learn more, you can also read our posts on why crickets are so loud, why axolotls are illegal in California, and why a deer would be by itself.

Capybaras are such calm creatures and love snuggles, getting them wherever they can. Capybaras’ relaxed nature makes them beloved creatures to animals and humans alike.

It’s no wonder capybara is so friendly. They live like they are on vacation, spending all of their days eating lush plants by the water with their families and occasionally an unusual friend.

Why Are DMV Workers So Rude? (11 Reasons Why)