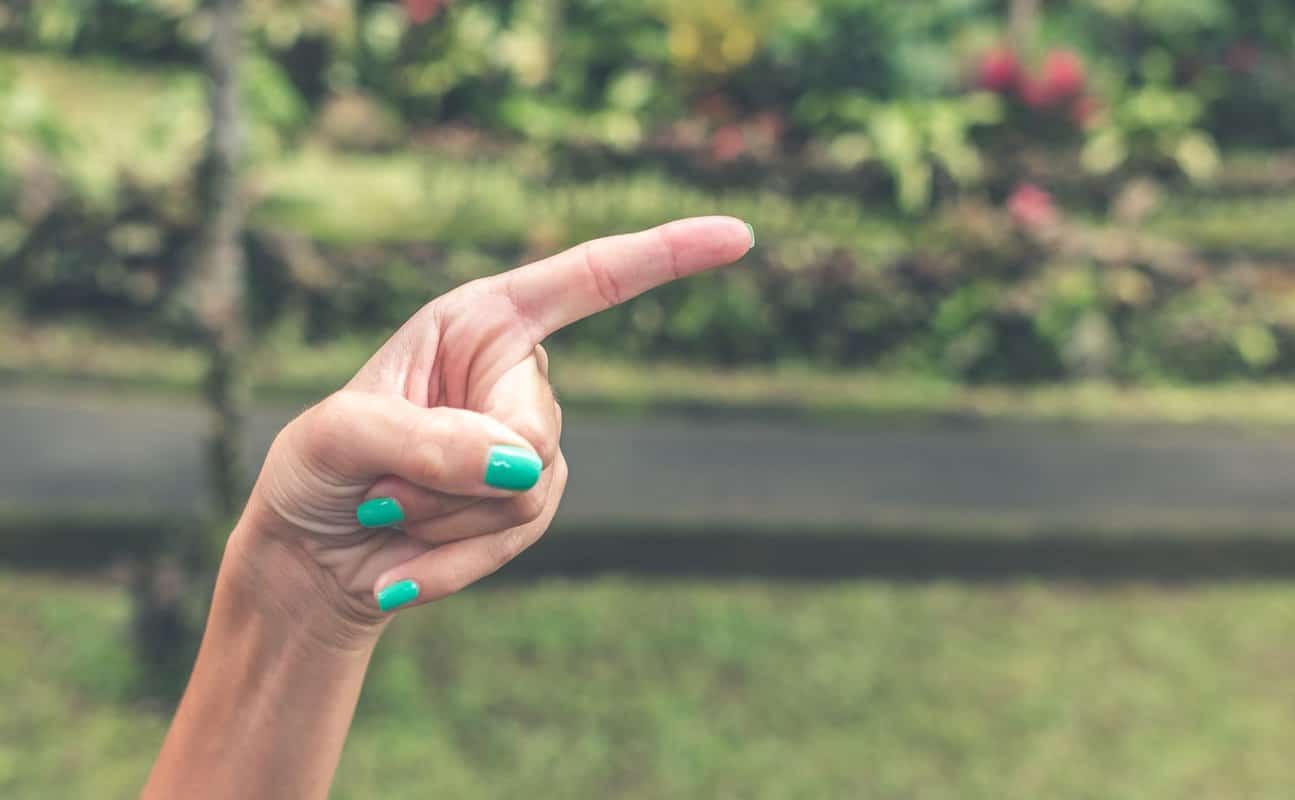 Non-verbal cues are indispensable as they add more nuance to verbal communication. Still, depending on the culture and context, a simple gesture can be regarded as rude or respectful.

So, why is it rude to point? People find pointing rude mainly due to negative cultural connotations and its patronizing nature. Keep reading to find out why it’s rude to point.

Why Is It Rude To Point?

It may surprise you to learn that the most common reason why pointing is rude in many cultures. In the old days, pointing was thought to be a method of hexing people and places.

You know how in movies, witches use wands to cast spells? Well, using a wand is derived from medieval folklore, when it was believed that witches would place curses by pointing.

Normally, if you point at people, they won’t think that you’re hexing them. Still, this myth has been passed down for generations.

So, if you believe pointing is rude but don’t know the reason why, it’s possible that your great-great-grandmother is the one to blame.

Another reason why it’s considered rude to point is that it can come across as bossy.

Usually, people order others around by pointing, and even then, it’s still considered a condescending way of asking for something.

Your intention may not be to boss others around, but because we associate pointing with demands and orders, the person on the other end of the index finger may feel patronized.

That’s why pointing isn’t the best way to make a request. After all, asking nicely gets you the best results.

Naturally, people don’t like it when others point fingers at them. This term literally means to accuse someone of some mishap.

Sometimes, when people point their fingers, it’s not in hopes of fixing an issue or mutually coming up with a solution. Instead, it’s a way of deflecting blame onto someone else.

In other words, pointing is reserved for conflicts and arguments, and even then, it’s not the most effective mode of communication.

Additionally, people often subconsciously regard pointing as a hostile way of placing blame, even during regular conversations.

There are plenty of circumstances where pointing your index finger might be useful. However, it doesn’t make pointing any less rude.

For instance, what if you want to call someone but you forgot their name? Or you want to refer to a third person? It’s obvious how pointing can come across as objectifying then.

Nobody likes to be on the receiving end of a pointed finger, especially if the person isn’t a part of the conversation.

Pointing may dehumanize the receiver, who may feel more like a zoo attraction than a person.

When pointing at someone, you automatically make them the center of attention without their consent.

Pointing is the best way to draw everyone’s attention toward something, but nobody likes to be suddenly put in the spotlight.

Read More:  Why Do People Mock Others? (11 Reasons Why)

Naturally, being thrust into the spotlight can be stressful for the person being pointed at, especially if a flaw is being highlighted.

Pointing is usually considered enough reason to turn a simple argument into a fight.

Many people find pointing to be an act of singling out or making fun of someone, especially if they’re strangers.

Combined with all the above reasons, it’s considered somewhat aggressive if a person knowingly points at another, especially in the context of an argument.

So, if your intentions are to make situations more tense and aggravate others, pointing is the way to go.

A lot of children often point at strangers or unfamiliar objects. However, this gesture can be excused since most children lack the necessary social cues.

Moreover, children often point at anything that catches their attention. They don’t have the right vocabulary, and they’re usually amazed by ordinary items they’ve never seen before.

These situations definitely call for pointing. However, adults don’t randomly point, so it can be inappropriate when an adult knowingly points to an object, a person, or a place.

For many people, pointing instead of using words can be one of the rudest non-verbal gestures anyone can do.

Most people dislike pointing because the lack of verbal response isn’t an effective mode of communication.

People can use pointing to escape conversations because it’s a gesture that can convey how boring a conversation is.

Moreover, people often point at a person instead of calling them by their name. This gesture then can indicate that they’ve forgotten the person’s name or don’t regard them as important.

Most successful conversations need to be two-way. Sure, it might be easier to point at something or someone instead of talking, or even while talking.

However, this behavior suggests a lack of effort to fully engage in a conversation and is somewhat disrespectful to the receiver.

It’s important to remember that different cultures have different social norms. So, while pointing may not be a big deal in one country, pointing may be rude, and even taboo, in another.

Pointing with the index finger is considered incredibly rude in East Asia, Latin America, and the Middle East. Since this is almost half the world, it’s best to retire the gesture altogether.

To learn more, you can also read our posts on why whispering is rude, why slurping is rude, and why the middle finger is bad.

Even though pointing comes naturally to people all around the world, pointing with only the index finger is considered a rude gesture in many cultures and under a lot of circumstances.

This gesture could be interpreted as hostile, patronizing, or even witchcraft! That’s why you should always consider your surroundings and how others may perceive a simple gesture.