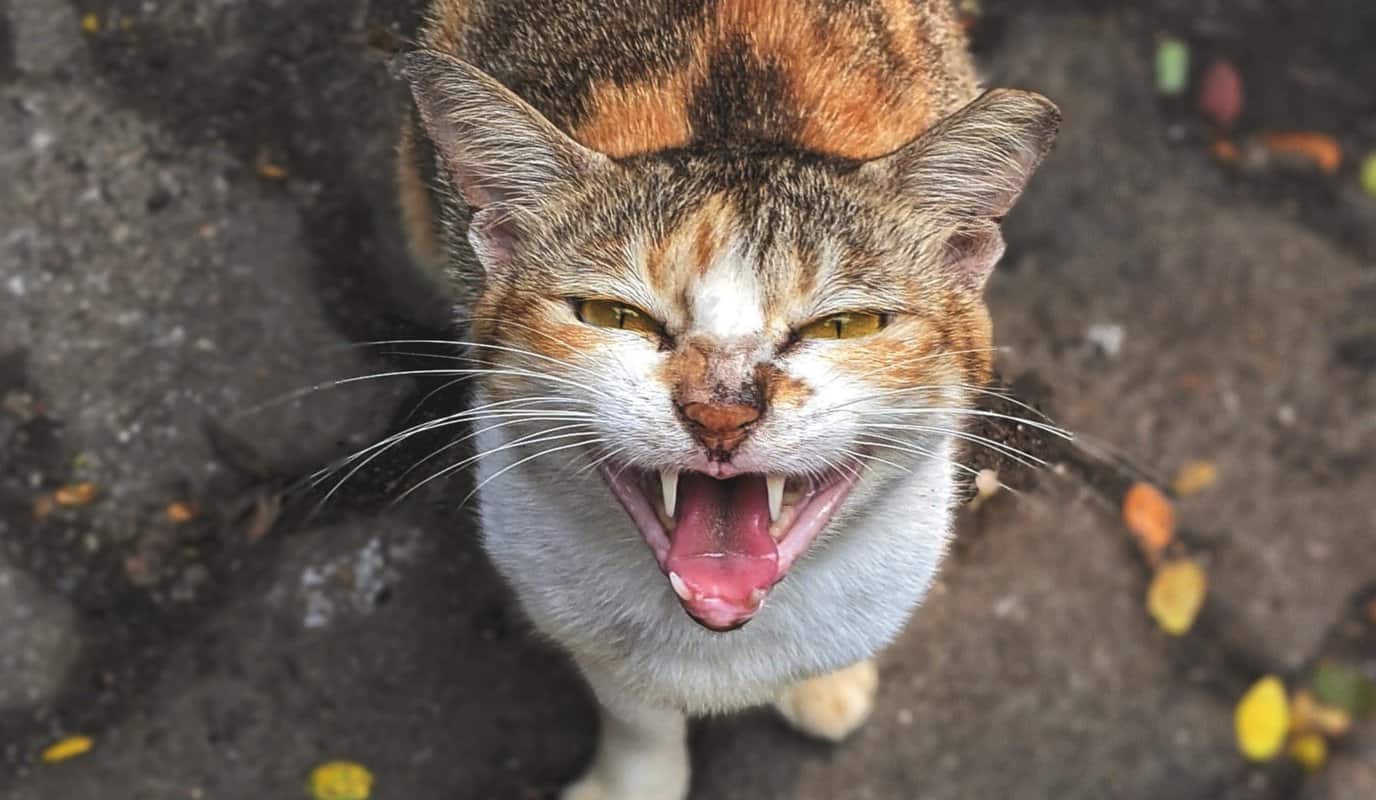 If you’re a cat owner, you’ve likely experienced the pure and unbridled meanness of your feline. Before you get your claws out, consider how many times you’ve been scratched, bitten, or just suffered rudeness.

Even without comparing them to their domesticated counterparts (dogs), a cat is objectively the pet equivalent to your high school bully. Here are 13 reasons why cats find it easy to mean.

Why Are Cats So Mean?

Like all animals, cats have evolved and adapted to their environments. The feline, however, has proven to be particularly nefarious in their adaptation to domestic cat life.

There have been a number of studies on cat communication including how they communicate with each other in the wild. Get this. Cats don’t meow for other cats.

Meowing is something they learned to trick the humans! Similar to a baby’s cry, cats have figured out that meowing gets attention (and more specifically, food) from people.

It is important to note that a cat will choose to exercise this cause-and-effect relationship whenever they feel like it.

2. Cats Only Know Being Mean

Have you ever noticed that cats don’t have a way to say “thank you”? Cats will meow or rub you when they want something but gratitude is simply not something they compute.

I know what you’re thinking. What about purring? Surely that is a form of endearing communication. Nope.

Purring is an automatic bodily response. Not a voluntary action whatsoever and definitely not a way cats communicate.

You better believe a cat will hiss though, which is the cat equivalent to “NO!”.

Thanks a lot for the “affection” in the form of a cat bite, feline friend!

3. Cats Would Rather Be Sleeping

The term ‘cat nap’ is a joke given that cats actually sleep nearly 12-16 hours a day.

That kind of schedule doesn’t really jive with how humans live their lives, so a housecat is likely getting woken up from a ‘nap’ multiple times a day.

Being woken up before you want to be will put even the kindest of people on edge for the rest of the day.

Read More:  Why Schnauzers Are The Worst Dogs (11 Reasons Why)

For cats, who would preferably snooze away during the daylight hours, the constant sleep disturbances must be enraging.

Look, not every witch is evil (reference: Glinda the Good Witch from The Wizard of Oz. She was sweet and bubbly.).

Most references to witches, though, include the cauldron-stirring, spell-casting old woman with the pointy black hat.

What else does a witch often have? Her cat. This could all be folklore but we all know that it is really hard to shake a stereotype.

Living with that kind of stereotype of an evil witch’s sidekick is reason enough for cats to have their backs up.

5. Being Sweet Isn’t A Thing

Tired of your cat’s bad behavior and wondering why they can’t just be sweet? Cats can’t be sweet because they biologically do not have the ability to know what sweet is (hence the behavior problem).

Of all the mammals in the world, cats are the only ones lacking the essential gene that accounts for not only being able to taste sweet but being sweet as well – it’s just not part of their brain.

Cats can taste savory though which is why they’re mean little carnivores. 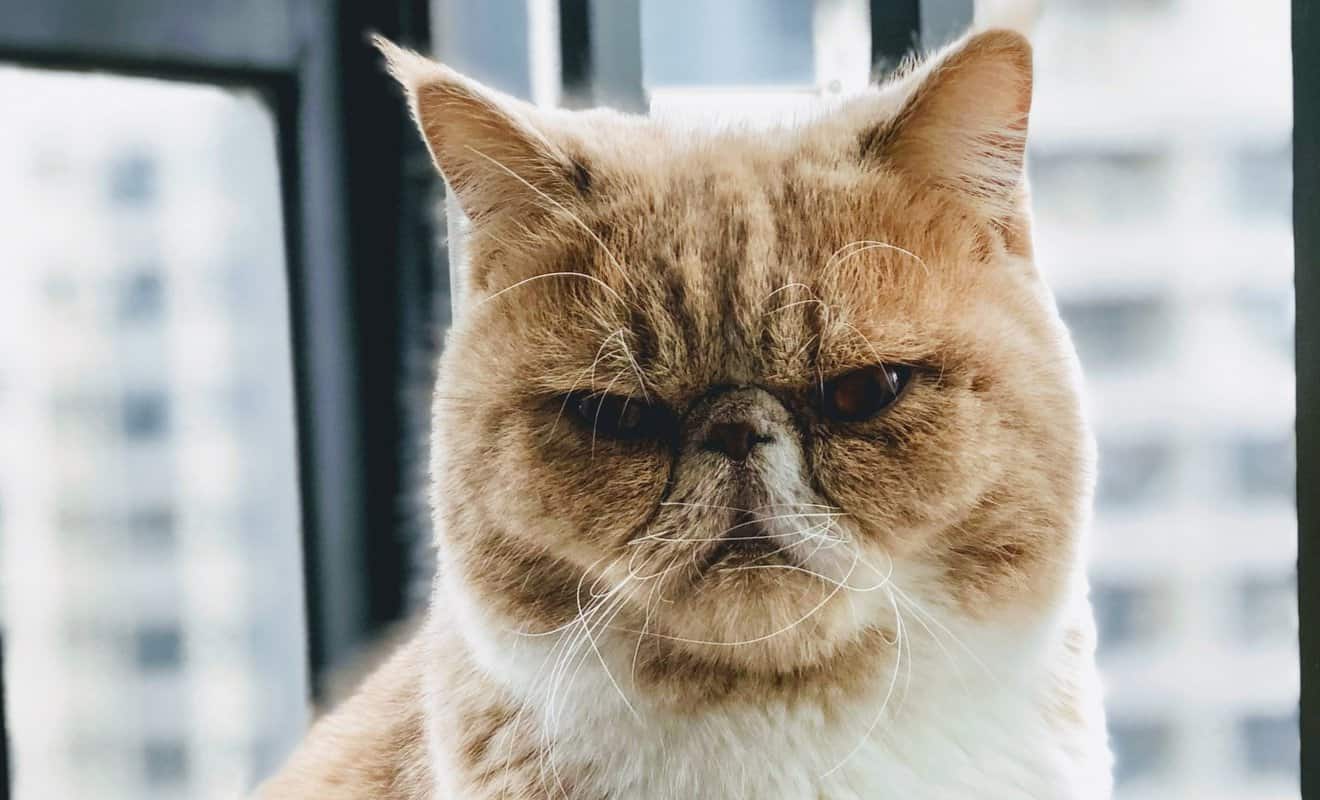 Have you ever noticed that cats like to perch? They love to find a spot with a high vantage point and sit on their elevated throne casting apathetic stares on the rest of us below.

It is a great point of view to escape potential predators or watch for prey but mostly it’s a great way to look down on us while we stumble through life.

After all, we’re peasants that have to get completely wet in order to bathe or prepare food for ourselves.

Cats kill millions of other animals every year. In fact, their introduction has led to the extinction of many endemic species in different areas around the world.

Why? Cats wake up and choose violence. It doesn’t matter that they are well fed or if they’re solely house cats. They want to kill for the fun of it.

This should be a surprise to any cat owner. No matter how chill a cat may seem they are always only a moment away from an attack.

No foot under a bedsheet is safe from a full-on attack that’s all teeth and claws.

Heaven forbid you to make a move to get away from the sharp grasp of a cat’s teeth around your toes too – that only makes them want it MORE!

Dr. Evil, Gargamel, Dr. Claw, Catwoman… all pet owner villains whose lap animal of choice is a cat. Is there something to be inferred about the bad guys gravitating to a feline over any other animal? Yes.

Evil is drawn to evil which is why Cruella De Ville wanted to skin dalmatian puppies while keeping her white Persian cat as her pet. Cat parents can be villains too.

9. They Enjoy Your Suffering

What do cats do when they’re bored? They mess with your stuff and make life harder for you. Cats enjoy watching a little human suffering.

A cat will have a whole box of cat toys but choose to unravel all the toilet paper. A cat will see a room full of chairs, but decide that one tiny shelf with your favorite houseplant is where they need to sit.

A cat’s enjoyment of our suffering is why a cat will ever so gently tap a water glass off the side of your coffee table.

Finally, a pet cat will also curl up right on top of your laptop just as you’re in the middle of working on an article about why cats are so mean.

Don’t be fooled by the gentle rubbing and pawing of your furry feline.

This may seem like a tender gesture but what they are really doing is marking you as their own and trying to cover your smell with theirs.

Cats have a very strong sense of smell and the oils in their fur and on their paws emit their own unique scent which they much prefer over ours.

Ever notice how a cat will lick itself after being pet? They don’t want your stink on them, thank you very much.

Even feral cats aren’t pack animals and your indoor cat certainly doesn’t need anybody else inside the home.

Other than accessing their tins of cat food and filling their bowls of water, cats are pretty good solo artists.

Too bad for them they can’t get into the food drawers where the kibble is kept. And cats lack the opposable thumbs required to change their kitty litter.

It turns out cats do need us despite their independent nature, which must be in-fur-iating.

A cat will make sure you know you did them wrong. They hold grudges. They prove a point.

Did you go from working from home to going back to the office all day? Well, you probably came home to some aggressive behavior in the form of your family photo frame being broken on the floor.

Did you change your cat’s diet from wet to dry food? Better believe you’ll be cleaning up kitty puke.

How about not getting around to cleaning the litter box? You now have a stain on your new rug to teach you a lesson about procrastination.

Sadly, there’s little you can even do about this unwanted behavior.

Cats simply aren’t dogs. They don’t bond the same way a dog does.

Cats don’t need your affection and approval the same way a pup would. Cats just don’t care about you or what you think about them.

It isn’t personal, it’s just how they are. Mean, evil furballs with behavior problems that we have chosen to make our own.

To learn more, you can also read our posts on why cats put their buttholes in your face, why people hate cats, and why cats sleep pressed up against you.

To sum up, cats are fluffy jerks. They are judging our actions, messing with our stuff, and begrudgingly accepting our hospitality.

All the facts show that your very own kitty is plotting your demise, but we keep snuggling them anyway. That may be the strongest reason for their meanness; despite their disdain for us, we can’t help but love them.

Why Is College So Hard? (11 Reasons Why)