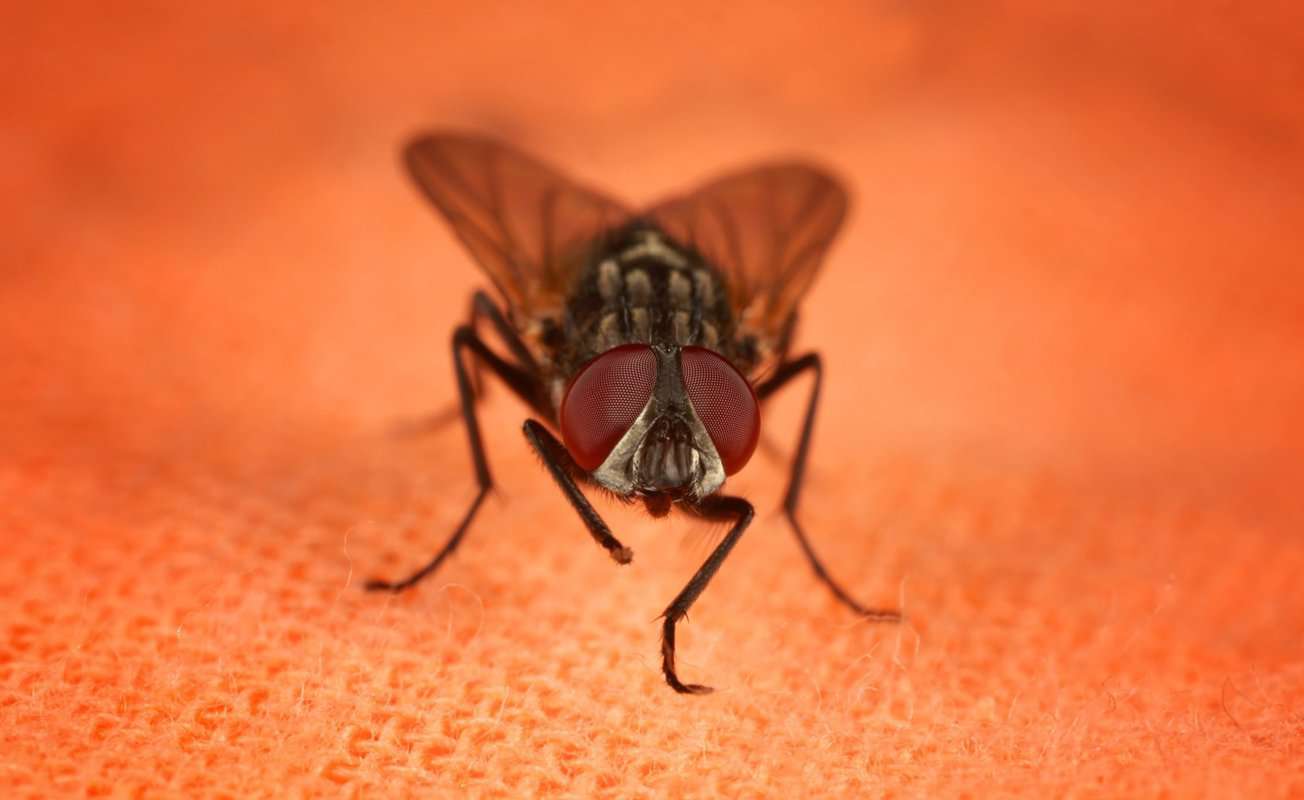 Flies can be annoying and disgusting but we all can’t help but observe them as they fly erratically around us. At some point, you might notice that flies start rubbing their hands together as soon as they land on any surface.

This curious behavior makes us wonder “why do flies rub their hands together?” In today’s article, we’ll take a closer look at this bizarre behavior to find out more about flies. So without further ado, let’s jump right in!

Why Do Flies Rub Their Hands Together?

The main reason why flies rub their hands when they land on things is that they’re cleaning them.

Of course, this may sound a little weird, considering that flies have an appetite for almost anything and would even fly over dirt, dung, and more!

However, flies are actually wary about their body cleanliness because a lot of small particles can stick to their bodies, which can harm them in many ways.

For example, if they leave dirt and grime all over their body, it will become much harder for them to fly around.

Additionally, a fly that is burdened by the weight of dirt sticking to its body and wings will have fewer chances of escaping predators and those who are trying to swat it.

2. It’s Not Only Their Hands That They’re Cleaning

As you now know, flies will rub their hands to clean them off and get rid of any physical or chemical residue that may stick to them after flying over exposed food and organic materials.

However, flies don’t only rub their hands. If you take a closer look, you’ll also notice that flies will also rub all their limbs with their corresponding counterpart as well as their wings.

Additionally, flies will also use their claws to rub off their heads, eyes, and torso in order to get rid of any small particles stuck there as well.

3. They Have Sensors All Over Their Bodies

Although this can’t be seen by the naked eye, flies have hundreds or even thousands of tiny hairs that cover their entire bodies.

These hairs act as sensors that allow the flies to feel their surroundings properly. In fact, these small hairs are capable of detecting chemical signals, which means that flies can actually taste flavors using their entire body rather than their mouth.

Dirt and small particles blocking these sensors can have a detrimental effect on the flies and their ability to survive. 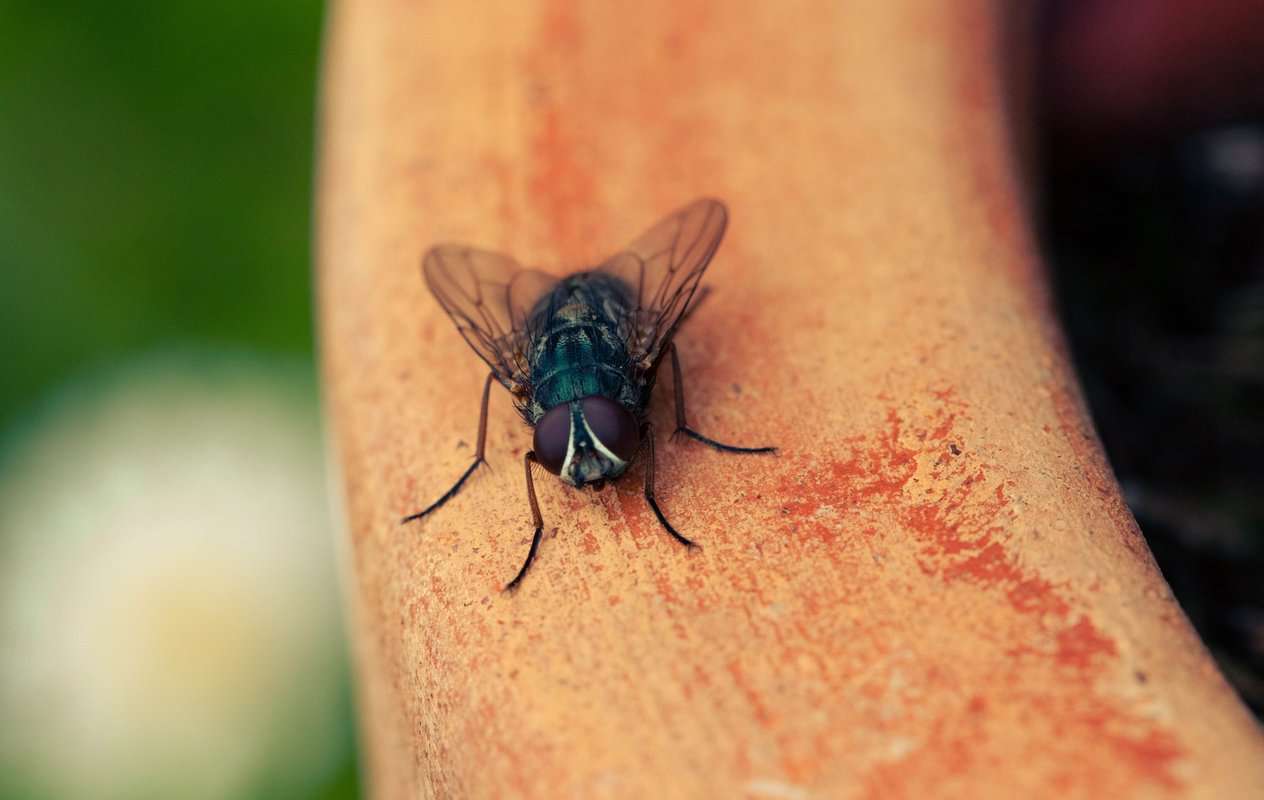 Lastly, while mating, female flies will prefer cleaner males over dirt riddled ones. For that reason, male flies will rub off their bodies more often when they’re around other flies.

What Do Flies Do When They Land on Us?

If a fly lands on our bodies, they’ll usually start cleaning their bodies in order to sense their surroundings after flying for some time. This includes their wings, torso, and head as well.

After that, they’ll be able to taste the secretions and body oils produced by our bodies. Flies may use their mouthpieces in order to suck these secretions and feed on them. So don’t worry, flies don’t bite humans!

Is It Dangerous When Flies Rub Their Hands on Us?

Due to the insatiable appetite for dirty surfaces that flies have, a lot of people are terrified when a fly lands on their body. However, the effect of flies is much less significant on our health than you think.

After all, flies don’t typically bite and will usually clean off their bodies when they get the chance, which helps them get rid of large quantities of dirt and bacteria.

With that being said, upon rubbing their hands and legs, flies can leave some of the bacteria they carry from flying around waste on our skin.

These bacteria can easily find their way into our digestive system, causing diseases like food poisoning, bacterial and viral gastroenteritis, dysentery (severe diarrhea), and more.

For that reason, it’s always recommended that you wash your hands regularly and clean the areas that flies land on whenever you have a chance.

Is the Hand Rubbing Behavior Exclusive to Flies?

Although many people think that only flies do the rubbing behavior, there’s a wide variety of insects that also do it because a lot of insects depend on their hair sensors to navigate their way and survive.

The only reason why we think that only flies do it is that flies are more commonly found around households and urban areas, so we don’t get to see other flying insects that also do this behavior.

This wraps it up for today’s guide about flies that walks you through this unique behavior and why flies do it.

As you can see, flies aren’t actually rubbing their hands for being diabolical devils that thrive on annoying us.

The hand rubbing behavior is simply to get rid of any dirt, pollen, or other residues that may get stuck to their bodies, which impede their ability to sense their surroundings and slow them down while flying.