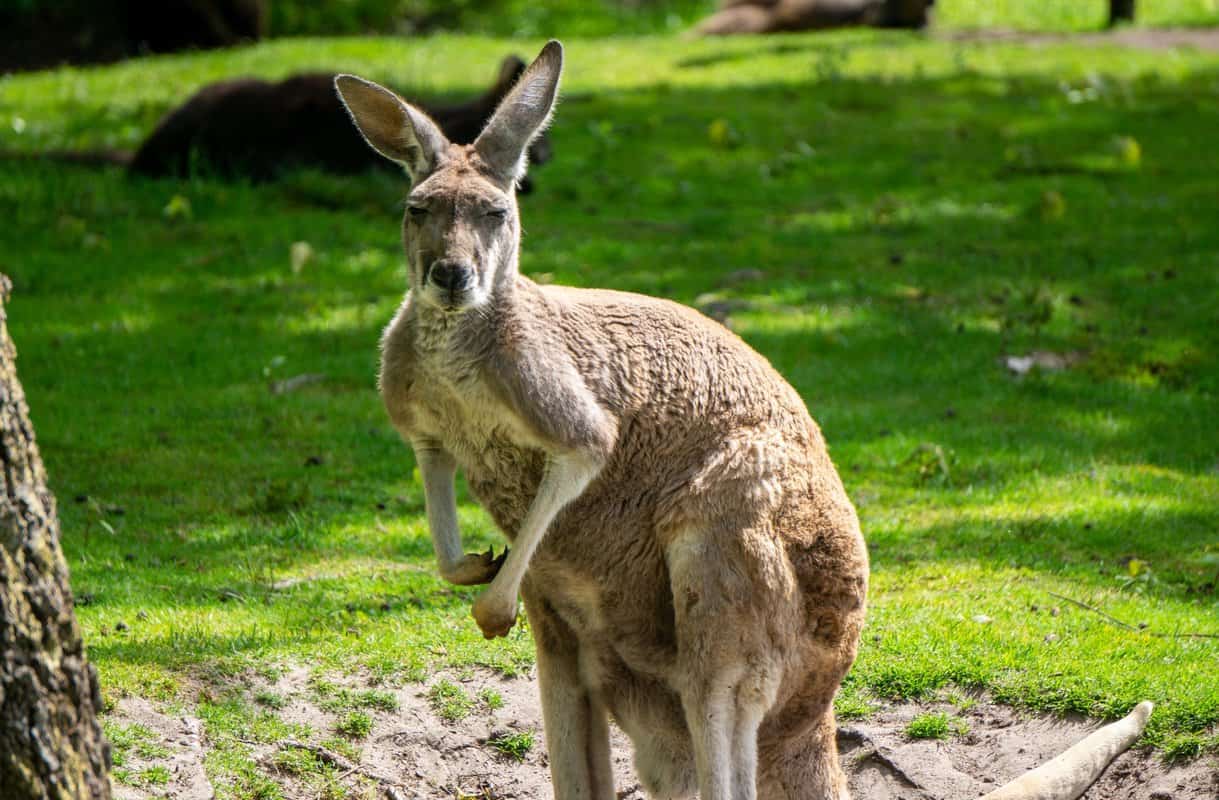 Humans are not the only mammal who love to flex their muscles. Kangaroos are also very muscular and well-built. Kangaroos need to be strong for various reasons.

Kangaroos spend their lives depending on their muscles to survive. I have discovered nine reasons why kangaroos are so muscular. I would enjoy sharing with you the information I have found.

Why Are Kangaroos So Buff?

The largest marsupial on the globe is the red kangaroo, which is native to Australia. They can achieve lengths of about eight feet and two inches from head to tail.

Kangaroos can also achieve a height of about five feet and eleven inches in an upright position. Their tails are utilized to balance their legs, as they are equal in balance.

These “beauts” also have large hearts and enhanced muscles. They are genetically conditioned to be large, impactful animals with seemingly limitless aerobic potential.

Kangaroos have vital mitochondria, which are known for their role in generating ATP molecules that fuel all life’s energy. Their mitochondria are similar to:

More activity equals greater muscle mass in animals. The red kangaroo is made up of fifty percent muscle mass. They are animals in constant movement and always on the go.

Sparring and fighting are common among kangaroos. The most aggressive fights are between the sexes. The survival of the fittest is the ruling of the game, as these fights are often brutal.

The fights between male kangaroos are called “boxing matches.” They put up their dukes and fight to win. They will:

Roos also like to puff out their impressive chest muscles as they fight. They will also fight dirty.

Kangaroos will often try to hold their opponent down with their muscular arms and, in a bold move, employ their legs and paws to destroy the other fighter.

Kangaroos are the “Mike Tysons” of the animal world. It is virtually as if they do not quite understand their massive power.

Kangaroos facilitate their movement with their hind legs and giant back feet, which consist of large muscles and tendons. Kangaroos expend all their energy hopping.

They have flexible Achilles tendons that go all the way down their hind legs. Their muscles seem to get bigger with each passing jump. Kangaroos hop along all day, every day, in search of food.

Due to their consistent exercise regimen, they hold court as some of the strongest animals in existence. Kangaroos are the only animal that hops as their primary way to travel.

Kangaroos have powerful toes, which help them jump across the terrain and hop at a relatively quick pace.

Kangaroos also have an enlarged fourth toe on each foot, which helps them to propel their foot off the ground. Their fifth toes provide them with hopping ability as well.

All that fighting leads to stronger muscles. However, they are fighting to see the most dominant kangaroo that will win over the ladies.

The dominant kangaroo is generally the only kangaroo in the group who is allowed to mate with the females.

Female kangaroos find their male counterparts more desirable when they have muscle. Their muscular bodies are extremely important when it comes to mating.

The males show off and flex their considerable muscles for the females, who go wild for them. 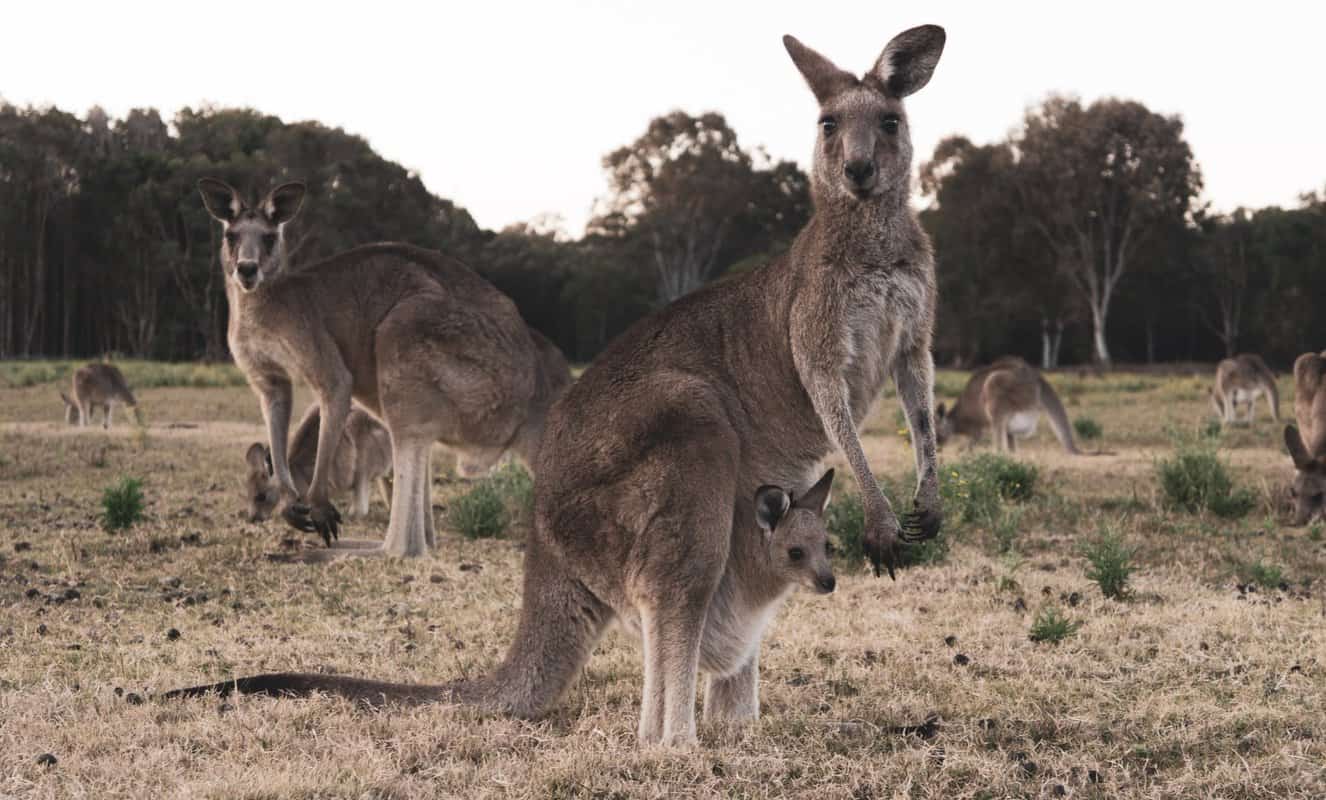 When it comes to mating, the kangaroo’s muscles are essential.

While the dominant males attract female attention by flexing and showing off their kangaroo muscles, females will attract male attention during ovulation.

Kangaroos clash with each other for the right to mate. Male kangaroos do not ever stop developing, which can make them dangerous.

Young kangaroos will box, play, or spar, as their parents usually teach the skills necessary to live a successful life. It prepares them for real fights when they get older.

Considering that the joeys learn to fight early on, they become powerful early on, and because of how they live their lives, they only become more robust as their lives progress.

Kangaroos are not built like other four-legged animals. They have powerful leg muscles to move and hop around as they please.

They also have large hearts and lungs, allowing them to store more oxygen and run for long periods without breathing heavily.

Many kangaroos have muscular chests like a bodybuilder and are built differently from other animals. They have muscles around their organs and body cavity.

Kangaroos have the muscle that allows them to survive in areas with many predators, such as:

Kangaroos have well-developed muscles that allow them to fight off predators. Kangaroos are well built with muscles throughout their bodies.

Kangaroos may be strict herbivores, but they have some interesting ways of retrieving food. They consume:

Kangaroos like to climb trees to get their food. They have strong legs for leaping from the trees above to the ground below.

Rugged pads on their hands and feet give them an advantage when climbing. Their claws help them to be able to grip the tree.

9. There Are Extra Buff Kangaroos

There have been some astonishingly buff kangaroos. A kangaroo named “Rodger” was one of the most muscular kangaroos in the world.

Rodger was six feet seven inches tall and weighed 200 pounds. The most popular photo ever taken of Rodger was when he had a metal feed bucket that he crumpled with his bare hands.

Many red kangaroos, like Rodger, have impressive muscle mass. They are typically the males of the group. Buff kangaroos have been known to crush metal with their bare hands.

To learn more, you can also read our posts on why a deer would be by itself, why alligators roll, and why a bird would fly into your car.

Kangaroos are extremely buff due to their fighting, climbing trees, and hopping. Buff kangaroos are everywhere in Australia. You can see that they have rippled muscles and bulging arms.

It is no secret that kangaroos are built well. They are extraordinary and robust creatures.

Why Is Bangladesh So Dirty? (11 Reasons Why)