Why Is Bangladesh So Dirty? (11 Reasons Why)

Bangladesh is India’s much smaller neighbor to the East. It’s known for Bengal Tigers and the world’s longest sea beach. But, Bangladesh is also known for being very, very dirty.

Bangladesh is one of the dirtiest countries in the world, but why? Up next, I’m sharing 11 reasons why Bangladesh is so dirty. Stick around and keep reading.

Why Is Bangladesh So Dirty?

Images of people clinging to the sides of Bangladesh’s trains or riding on top of them describe the dire population issues. There are just too many people.

Bangladesh takes up a little more space than Greece. So overall, Bangladesh is not very big. But population-wise, over 163 million people call Bangladesh home.

That’s the eighth-most populated country in the world. People create waste of all kinds, and when they’re in such a small area, it’s just not possible to keep up with the mess.

The infrastructure of such a small country just can’t hold up to the massive population.

Location is everything, right? Even before Bangladesh became supremely overpopulated, it was already working against the fact that it’s next to one of the dirtiest rivers in the world- The Ganges River.

Oddly enough, the Ganges River is a sacred and holy place, yet Bangladesh, and its neighbor, India, continuously dump raw, untreated sewage into the waters.

In addition to the Ganges River, there are several other polluted waterways that run through Bangladesh, compounding the issue even further.

Bangladesh is a world leader in garment production and exports. There are quite literally thousands of factories throughout Bangladesh- churning out exports and pollution 24/7.

While the manufacturing plants themselves add to the overall dirtiness of Bangladesh, the side effects such as added transportation and other necessities required to run all of these factories also add to the issue.

There are also not enough rules and regulations in place to keep up with Bangladesh’s export industry. The amount of people working to produce things to export far exceeds the number of inspectors.

Wait, what? People still read the newspaper? In Bangladesh, they sure do- and they love it! There are over 2,000 newspapers written and published daily in Bangladesh.

That’s tons of paper each and every day going toward making these newspapers. The newspaper situation feeds right into the idea that there’s just too much waste output.

Again, the newspaper production itself is an issue, but the residuals, like manufacturing pollution, also add to the dirtiness of Bangladesh.

Bangladesh lives just north of the biggest bay in the entire world- the Bay of Bengal. The sheer amount of boat traffic that comes in and out of the ports in the Bay of Bengal is astronomical.

The bay is also bordered by several other countries that aren’t known for their cleanliness, so the bay itself is dirty. This, of course, adds to Bangladesh being unclean.

India and Myanmar also border the bay, but it serves as a hub for other areas like southern China and northwestern Thailand. 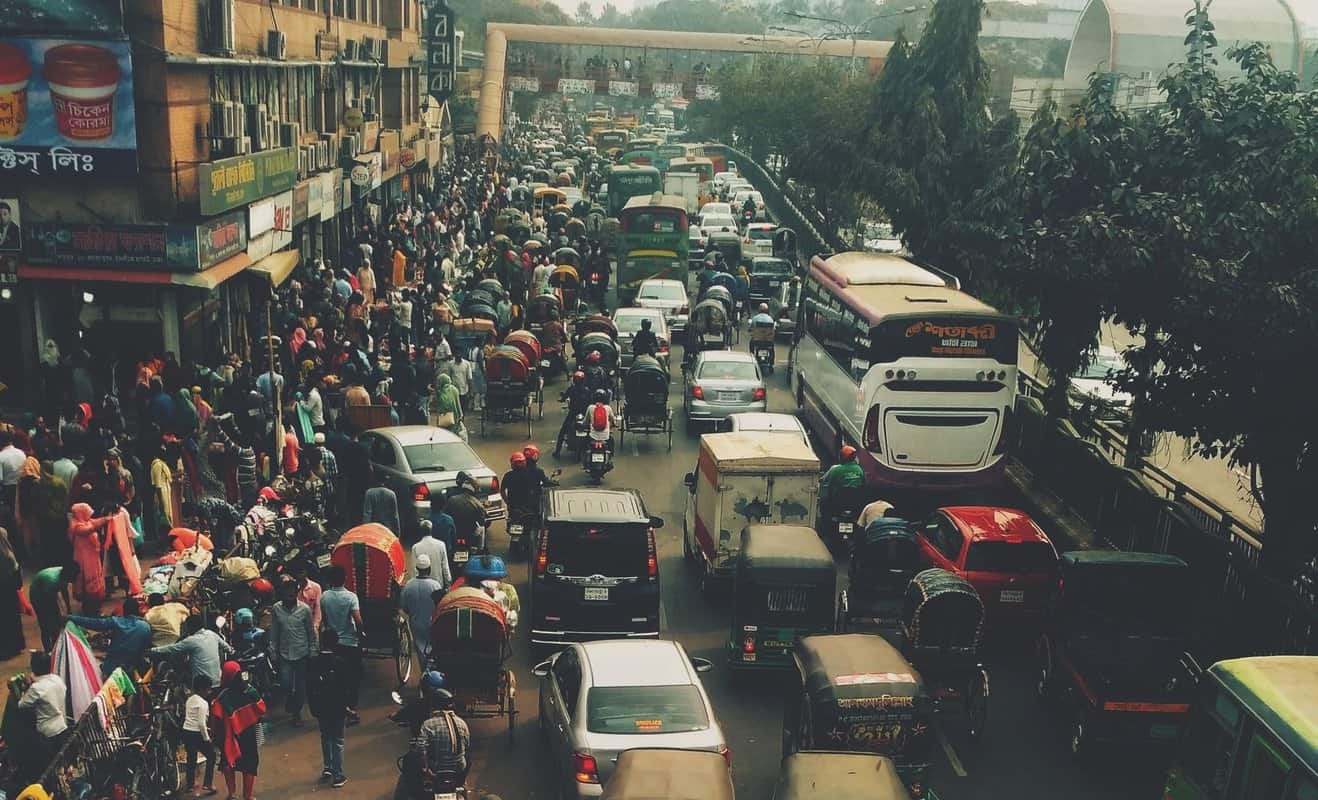 Not only is the ground dirty in Bangladesh, but the air is dirty too. Pollution in Bangladesh is amongst the absolute worst in the world.

As we mentioned, there’s a lot of manufacturing that goes on in Bangladesh, adding to the issue of pollution.

There’s also a ton of pollution from the number of vehicles running each day throughout Bangladesh. So many people are driving in one small area.

Bangladesh has six seasons, and many of them are very wet. They also experience a heavy monsoon season with lots of flooding.

In addition to the rain and flooding, Bangladesh can also get really hot. A country that’s already struggling to keep clean is only made worse with hot, rainy weather.

For many of us, the sewer system in Bangladesh is just unfathomable. When so many people live in one small area, an efficient sewer system is an absolute must.

Unfortunately, Bangladesh didn’t have a great sewer system to start with, and there’s really no way to recover with what they have.

Instead of the modern sewer systems that many countries with larger populations have, sewers in Bangladesh are actually cleaned by real-life humans.

Those who clean the sewers are paid very little to actually submerge themselves deep into the sewers and waste and manually unclog drains- with no protection!

Bangladesh is overall an incredibly developing country. Even those doing the dirtiest jobs, the sewer cleaners, only get paid $10ish a day.

Like other countries in Southeast Asia, Bangladesh still operates within a caste system. As you might already know, there’s little one can do to escape the class they’re born into.

In Bangladesh, there are millions and millions of people in the lowest social class, with more being born into this population every day.

There’s not enough room for the lower classes to increase their financial status, so this population continues to rise.

This population is largely homeless, living on the streets of Bangladesh’s major cities. This adds to the issues that make Bangladesh so dirty.

But also, those that are part of the higher social classes don’t necessarily feel the impact of the dirtier parts of Bangladesh as much as the others, but they’re the only ones that could potentially have a say in fixing the issues.

We can’t always blame history for modern-day issues, but in the case of Bangladesh being so dirty, history definitely played a very important role.

After the Industrial Revolution, Great Britain set out to colonize parts of Southeast Asia, including India and Bangladesh.

Bangladesh was under British rule for almost 200 years. When Bangladesh finally regained independence, it was plagued with new issues.

With the tumultuous past, Bangladesh didn’t get to put the infrastructure in place that is needed to support its population.

Bangladesh’s caste system and lack of financial resources funnel into a lack of education. So many people aren’t even able to attend school simply because of the social class they’re born into.

Without proper education, the cycle continues. The lower classes continue to add to the issues that make Bangladesh dirty, but the higher classes don’t necessarily care to remedy the situation.

All in all, there are quite a few different issues that make Bangladesh so dirty. Unfortunately, the problem seems to be too big to fix.

With so many people in one place and a complete lack of infrastructure to support the population, Bangladesh will continue to be dirty.

Why Is Jazz Music So Good? (9 Reasons Why)