Why Do Beach Volleyball Players Hug? (5 Reasons Why) 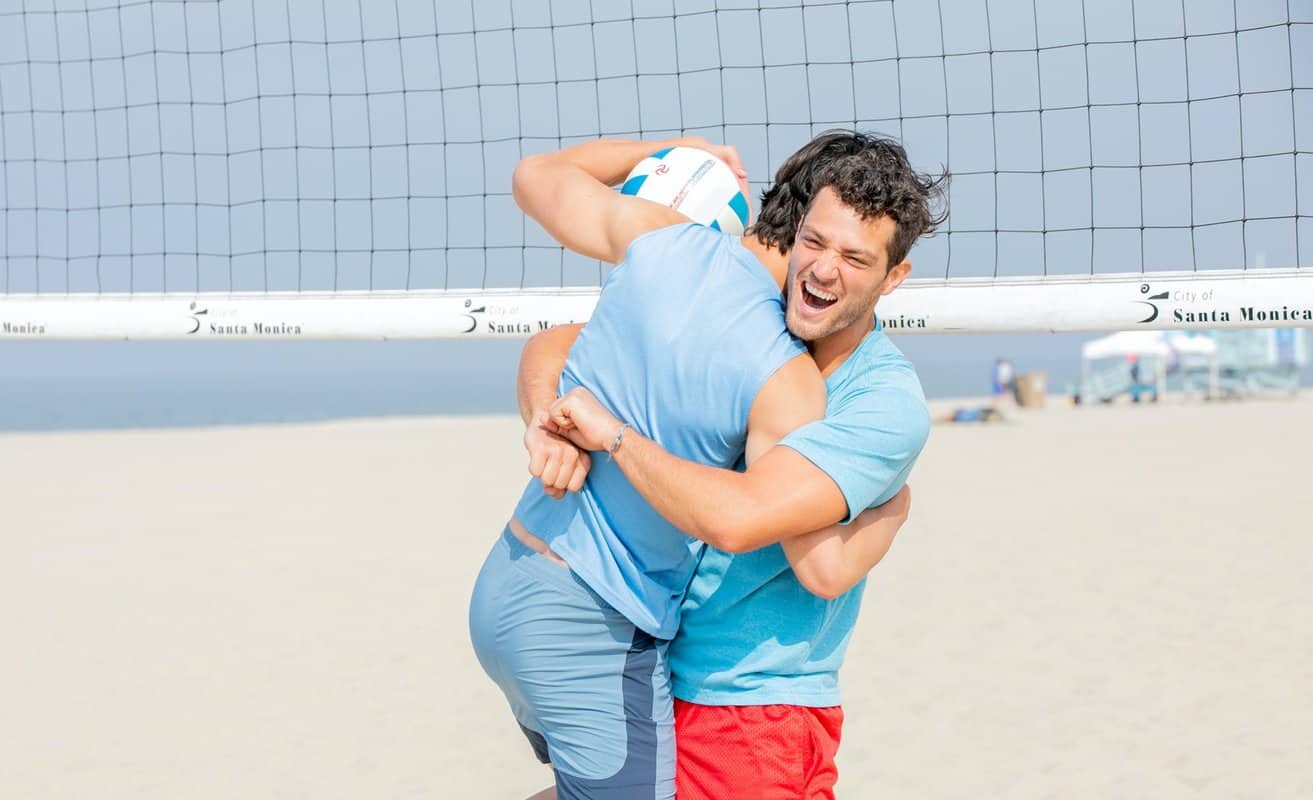 Why do beach volleyball players hug each other so much? Even if they lose a point?

If you’ve ever watched a volleyball game and had these questions in your head, this post is for you. Here are five reasons why beach volleyball players hug!

Why Do Beach Volleyball Players Hug?

Volleyball is a high-speed, high-energy sport. After each point, the team can’t just stand around; they need to keep moving.

To keep the pace up, the players need to hold on to the momentum they have. After every point is scored, the team goes in for a hug almost immediately.

Then, each player takes his or her place on the court again. By doing this, the players preserve the energy they have.

In volleyball, momentum is everything. If you lose speed and power, you might cost your team the game.

Although the hugging may seem excessive, it’s a part of keeping the momentum. A losing team may actually try to turn the tide by calling for time out to pull the other team’s vigor down.

2. To Keep The Spirits Up

Hugging in volleyball games isn’t a rule per se; it’s closer to being a tradition. Some players could be doing it because it makes them happier. But how does that work?

Read More:  Why Do Baseball Players Chew Gum? (9 Reasons Why)

Hugs are known to have a lot of benefits. When we’re happy and excited, our bodies release various hormones.

These hormones include dopamine, oxytocin, and serotonin. When you hug someone, the levels of these hormones rise up!

As soon as the hormones are released into our bodies, we feel happy and less depressed. This is why they’re also called “the happy hormones.”

To keep the spirits up at the beginning of a game and the teammates excited, they tend to hug after each point.

3. To Scare The Other Team 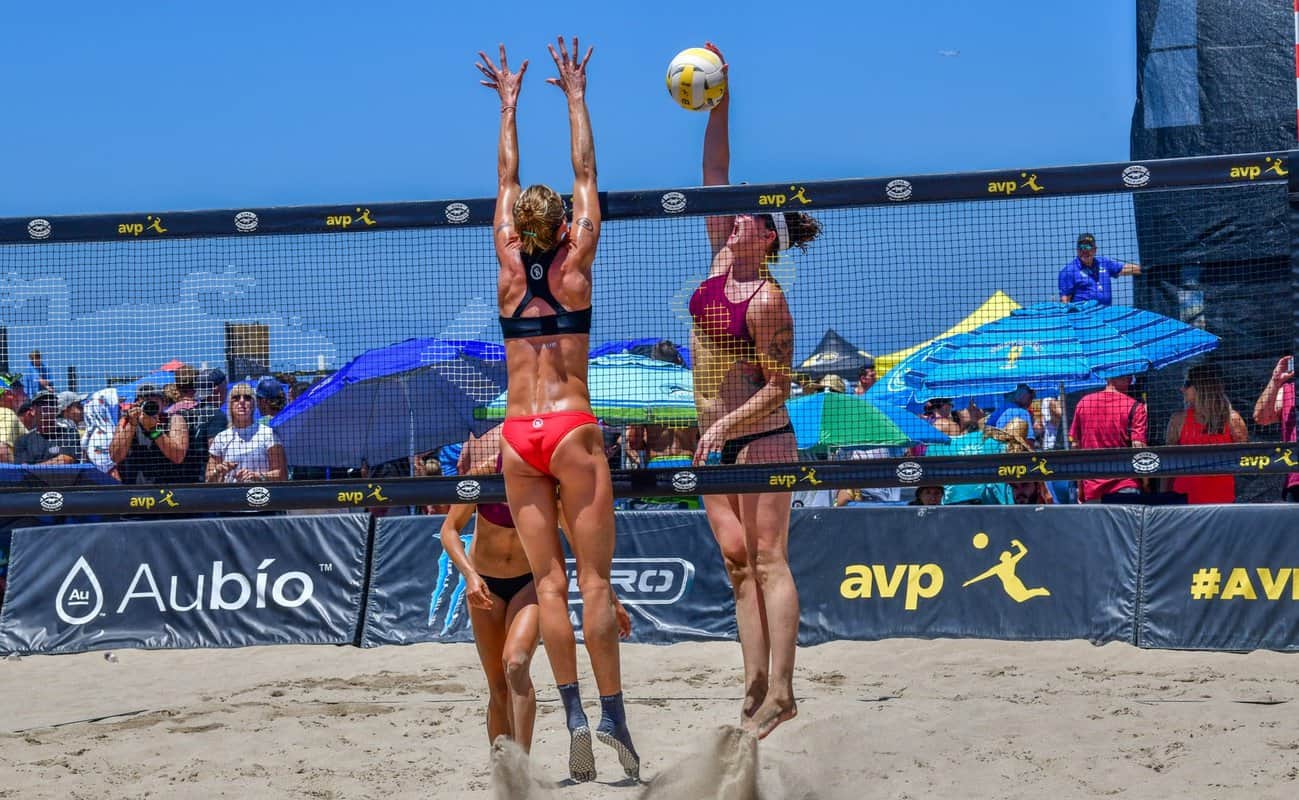 Team players often hug after they win, and this hug will be full of bursting energy. However, what if the team is losing or if the point was scored against them?

In this case, to scare the other team, the hug could be used as an intimidation tactic. This tactic here is simple; if the winning team sees the losing one hugging after they’ve scored against them, they start to get shaken up.

Mostly, hugging teammates are celebrating a win, but what is a losing team celebrating? The energy of the hug can actually unnerve the opposing team and decrease their morale.

This will show the other team that it doesn’t matter that they scored because the hugging team is still full of spirit and intends to win the game!

Read More:  Why Do People Idolize Athletes? (11 Reasons Why)

As humans, we’re mostly used to expressing our feelings through verbal or facial expressions. However, touch is very important in communication too.

According to a study, a stranger was able to express a variety of emotions to another person by simply touching different parts of their body.

Some of the emotions they managed to express were happiness, sadness, fear, and anger.

When team members hug during that small window after each point, they can express their sympathy and share their strengths together.

Also, the interaction can allow members to communicate verbally with each other. If a player notices a weakness in the opposing team, he can easily point it out to a team member during the hug.

While maintaining the momentum of the game, they can also exchange encouraging words or decide what to do next.

5. To Calm Each other

Stress and fear levels can run pretty high during a game of volleyball. However, scientists have found that touch can reduce anxiety in people with low self-confidence.

Scientists say that comforting someone through touch (e.g., hugs) reduces stress. Moreover, comforting can even lower the stress levels of the person who’s doing it.

Also, did you know that hugs can fight cortisol? Cortisol is a stress hormone that is released in your body during tough times from your adrenal gland.

When playing volleyball, hugging your teammates reduces their cortisol levels and counters the effects of stress. This will help them relax and is especially beneficial if the team member has low self-esteem.

To learn more, you can also read our posts on why basketball players are so tall, why ballerinas are so skinny, and why backflip is illegal in figure skating.

Why do beach volleyball players hug? It’s because it aids them in various ways. Hugging helps the team gain morale, especially when losing, and it can be used to scare the other team.

Why Do People Look Younger Now? (9 Reasons Why)