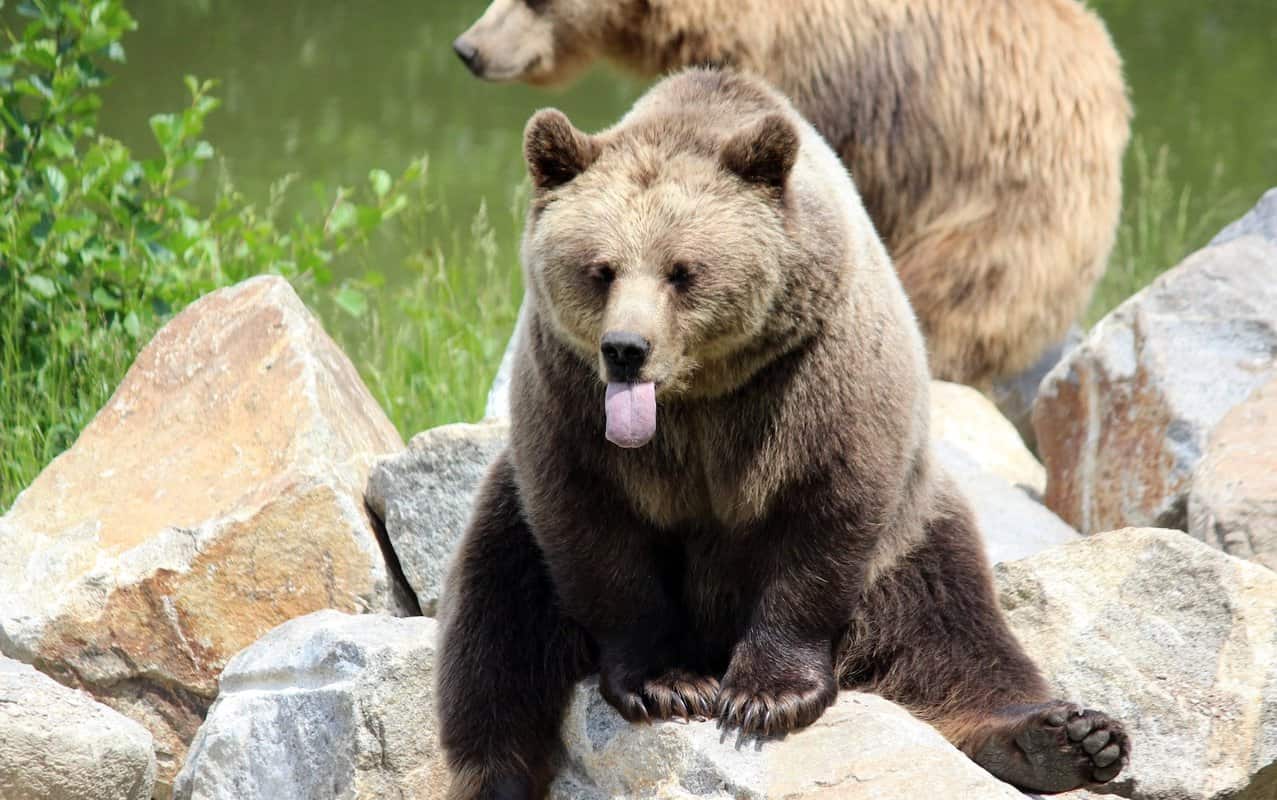 Bears are one of the most dangerous animals on the planet. They have sharp teeth and impressive fangs that could rip a person apart. Yet somehow, they seem cute to us.

Why are bears so cute? What factors transform a deadly killing machine into an adorable critter before our eyes? Why do people associate this creature with less-deadly animals?

Why Are Bears So Cute?

Bears have fuzzy fur that looks like you could reach out and pet it. They have fuzz from head to toe in this coating, reminiscent of a cuddly blanket or a pillow.

Humans also associate fuzzy fur with animals that are much less threatening. Bunny rabbits have soft fuzz, and so do cats. A bear doesn’t seem far off with its layer of fluff.

When humans see something soft, they automatically want to touch it. Seeing this layer of fur on a living thing makes it appear very cute to the average person.

Unfortunately, the fuzzy fur sends the wrong signals to many people. It’s astounding how many folks have been caught off-guard by the natural predator action of a bear.

Many bears have big eyes. There is something in the human brain that is attracted to a face with large eyes. We tend to think people and animals with this imbalance are adorable.

Big eyes are most common on baby bears. The cubs haven’t grown into their features yet, so their eyes are much bigger than they need to be. They look adorable.

Unfortunately, being around a baby bear is one of the most dangerous things you can do. If there is a baby bear, you can be sure the mother isn’t too far behind. Stay away.

Bears also have distinct personalities, which makes them feel more human. Their natures cause them to do things people consider cute in an animal.

It’s easy to see that bears can be aggressive. However, you can also catch them in playful and loyal moods. It’s adorable to see bears in the wilderness having fun with themselves.

The bear with the biggest personality is the cub. While the mother walks around and hunts for food, the babies play like human children. The mother will huff and puff to get them on track.

Personalities allow us to empathize more with the bears. They feel and experience life, too. It’s cute to see these feelings at work in a bear.

Bears walk on all fours, but they often stand on two legs. Some bears move in this position for a distance before falling back down to their four feet again. It’s like a human.

There are other resemblances to humans in bears. They can talk with their noises, have expressive actions and eyes, and protect their families. Bears have many similarities.

The hidden human-like actions subconsciously remind us of ourselves. Instead of a bear, we see an animal that knows who we are.

Bears are big creatures. It seems like everything should match – right? When you see the nose, it’s shocking to note how small it is. A bear’s nose makes its face adorable.

The tiny nose gets the job done. It’s able to sniff the air and smell food from a long way away. It also protects their face. The bigger the nose, the larger the target for other animals.

Anything small on the face of something massive makes it adorable. A bear’s nose is one of the features that help it stand out as adorable compared to other animals. 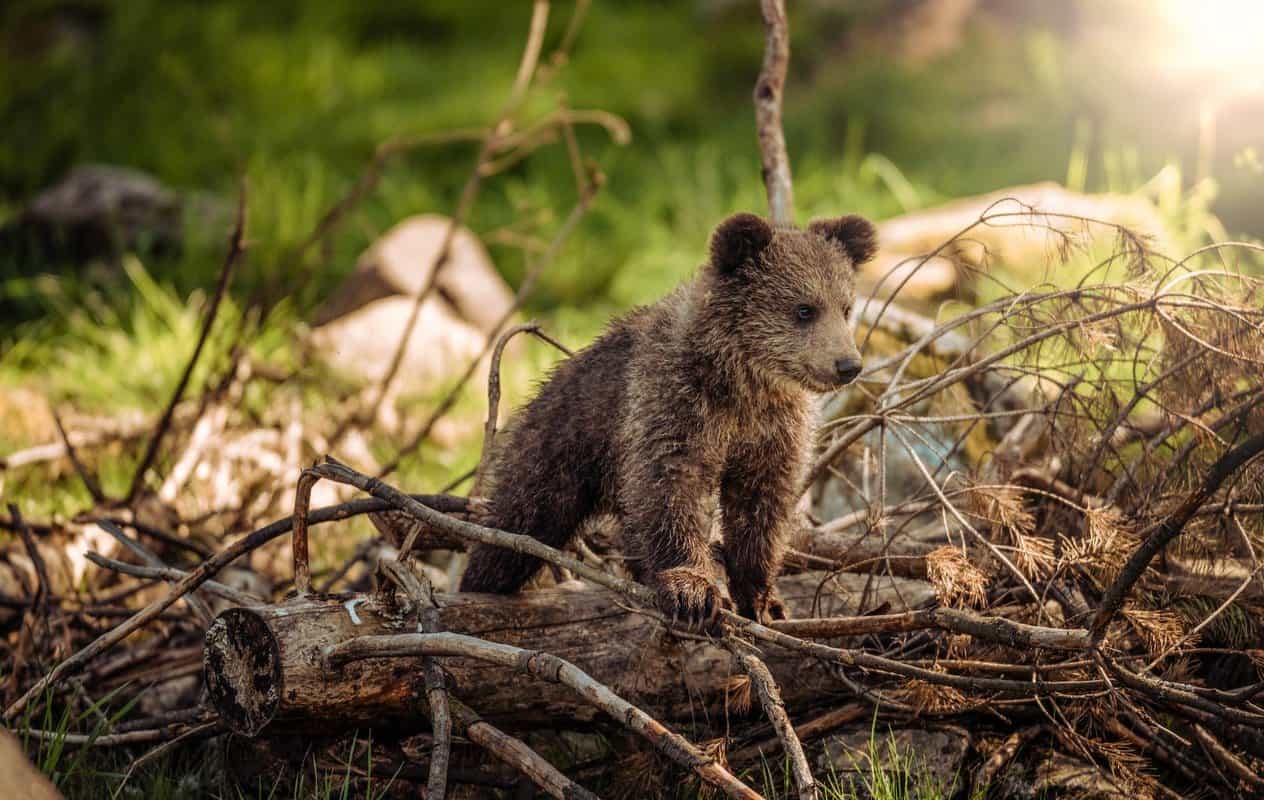 Bears have a lot of control over their bodies. They have to be able to catch their prey and get around the world without too many errors. However, they have their clumsy moments.

Read More:  Why Would A Deer Be By Itself? (7 Reasons Why)

Balance is an area where bears are lacking. They are known to trip over their feet every once in a while. They also have trouble grabbing things with their lumbering paws.

It’s adorable to see something as deadly as a bear struggling to walk sometimes. It reminds us that they are creatures too, and they have their flaws like the rest of us.

There are tons of animated bears on television and in movies. Shows like The Berenstain Bears and We Bare Bears showed us the more adorable side to the predator.

We think bears are cute because we associate them with the animated versions we see on the big screen. It’s a subconscious association that allows us to put our guard down.

Although bears can have friendly moments, it’s critical not to approach one in the wild. They are not the same as their animated counterparts. There are plenty of movies about that.

Another association we make is with teddy bears. Companies have taken the fierce creature and turned it into plush stuffed animals most commonly held in the hands of babies.

When we see a bear, we subconsciously think of teddy bears. We feel like we could walk up to a bear and cuddle them and it wouldn’t be a problem in any way. They are adorable.

Bears may be soft, but they couldn’t be further from their stuffed counterparts. Give them a wide berth if you happen to see a bear in the wild.

Paws are adorable too. Humans are so used to their long and spindly fingers that they tend to find paws adorable. It’s why kids are often given mittens instead of gloves with fingers.

Bear paws make it trickier for them to grab items. Bears must pick up their meal as if they have their fingers taped together, and the result can be adorable to a viewer.

Read More:  Why Are New York Rats So Big? (5 Reasons Why)

Paws are round and fluffy in all the best ways. They also hide the bear’s scary claws, which would make them appear much less adorable.

Bears in zoos are much tamer than those in the wild. They interact with trainers and lumber right to the glass as if they want to be friends with the people behind it.

When we see bears in the wild, we associate them with captive bears. We think they are adorable even though they could rip us apart in a few seconds.

Bear cubs are adorable. Anything that is a miniature version of anything is cute, whether it’s a human baby or a stapler. It’s tricky to associate danger with anything helpless.

There are also many similarities between bear cubs and human babies. Both are clumsy, vocal, and helpless.

If you see a bear cub, don’t approach it. They may be cute, but their mother is close behind. You won’t make it out alive, no matter how adorable and unassuming they are.

To learn more, you can also read our posts on why there are so many spiders in Australia, why capybaras are so chill, and why photographers can’t touch animals.

Bears are dangerous, but they also happen to be adorable. They are cute because they have personalities, tiny noses, and perform human-like actions. They are the best creatures.

Although they are cute, it’s critical to remember the bears will not hesitate to kill you on the spot. If you see one in the world, don’t approach it if you can help. Give it plenty of room.

Why Are Seals So Friendly? (9 Reasons Why)

Why Do Wrestlers Have Long Hair? (5 Reasons Why)