Why Is Tropicana Field So Bad? (9 Reasons Why) 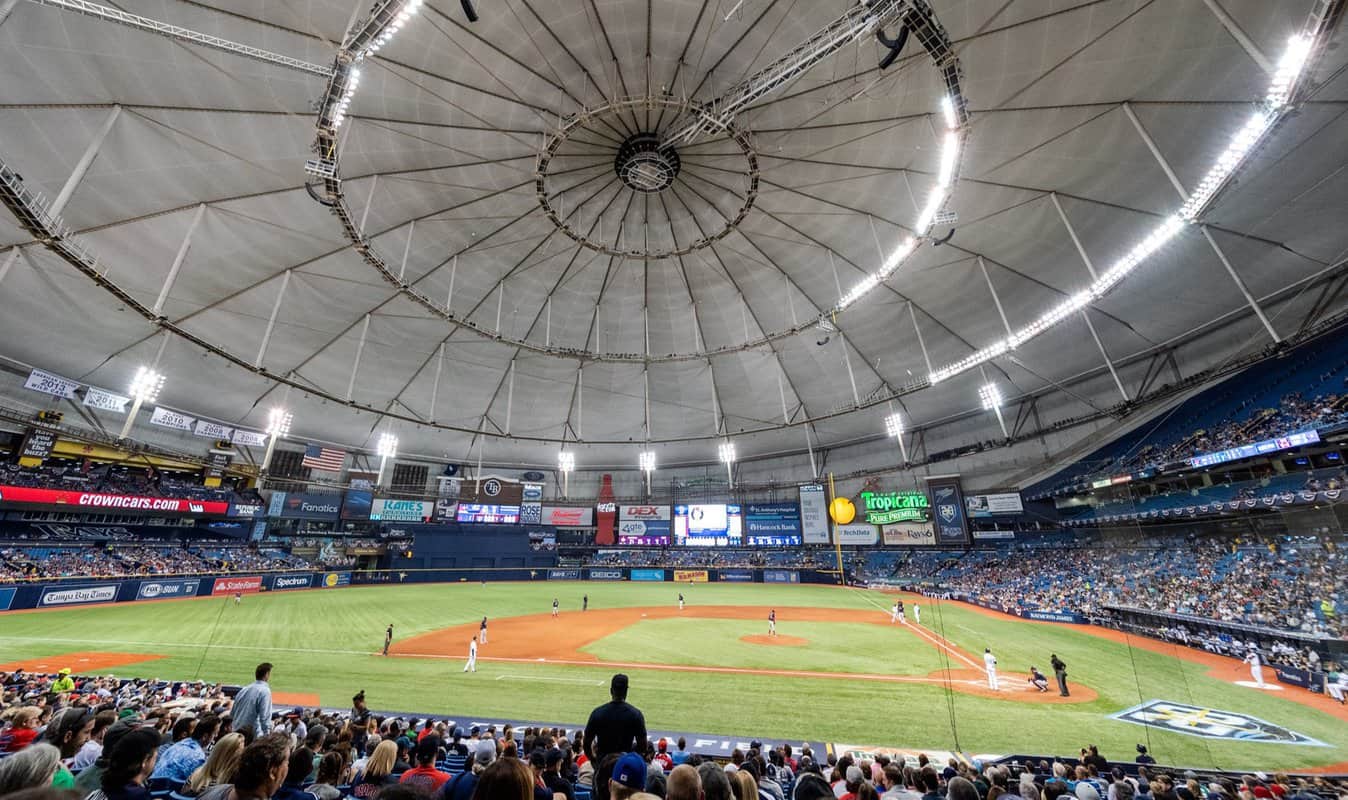 Going to a baseball game has long been considered one of America’s great pastimes, with the experience enhanced by the many stunning ballparks across the nation.

However, one name is consistently listed as providing the worst stadium experience in baseball: Tropicana Field. Keep reading to find out why Tropicana is MLB’s least desirable destination!

Why Is Tropicana Field So Bad?

Getting to Tropicana Field is a chore for most fans.

First off, it is not really in Tampa, as the name of the home Tampa Bay Rays would suggest. Tropicana is actually in St. Petersburg, making the stadium about 22 miles from downtown.

Many Tampa residents and visitors note that it can take them more than an hour and a half to get from downtown Tampa to Tropicana Field.

Perhaps the location would be bemoaned by fans less if the name of the team were changed from the Tampa Bay Rays to the St. Petersburg Rays.

However, semantics are not the only issue, as many fans feel unsafe walking in the areas surrounding Tropicana.

Combined with the fact that it is isolated from the Bucs and Lightning home facilities and the more bustling Tampa downtown, and the St. Petersburg location makes Tropicana bad.

Built in 1990, Tropicana Field is one of the oldest stadiums in MLB.

As such, Tropicana definitely feels dated for both players and fans alike. There is a certain dim and gloomy ambience that pervades the facility.

In addition, Tropicana is the only fixed stadium remaining in MLB.

Read More:  Why Is Crossfit So Expensive? (11 Reasons Why)

While it can be argued that a roof is necessary due to the heavy rainfall in the area, more contemporary stadiums with similar concerns use a retractable roof design.

Therefore, even on those sunny Florida days, being inside Tropicana feels a bit like prison.

As a roofed stadium, there are times when balls will inevitably hit the roof. This is not uncommon for any roofed facility.

For other stadiums, when a ball hits the roof, it is either a fair or foul ball, depending on if it hits the roof over fair territory or foul territory. Pretty straightforward

However, Tropicana has a series of catwalks (rings A, B, C, D) with each ring following their own rules for what happens if a ball hits them.

This can be confusing for both players and fans to know which ring is hit and if the result of the play is a home run, fair ball in play, ground rule double, or foul ball.

Even for closed-in facilities, the windows and skylights are used in a way to make it feel like visitors or outdoors.

With Tropicana, there is none of this. Natural light flow is minimal in the park, and artificial lighting has to be used at odd times of the day.

This makes it feel like all games are being played before dawn, which is a major bummer for fans who wanted to watch a ball game on a sunny afternoon.

There have been attempts by the Rays organization to use blue LED lights to provide a more natural look, but it has been mostly to little avail.

Read More:  Why Are Weight Plates So Expensive? (7 Reasons Why) 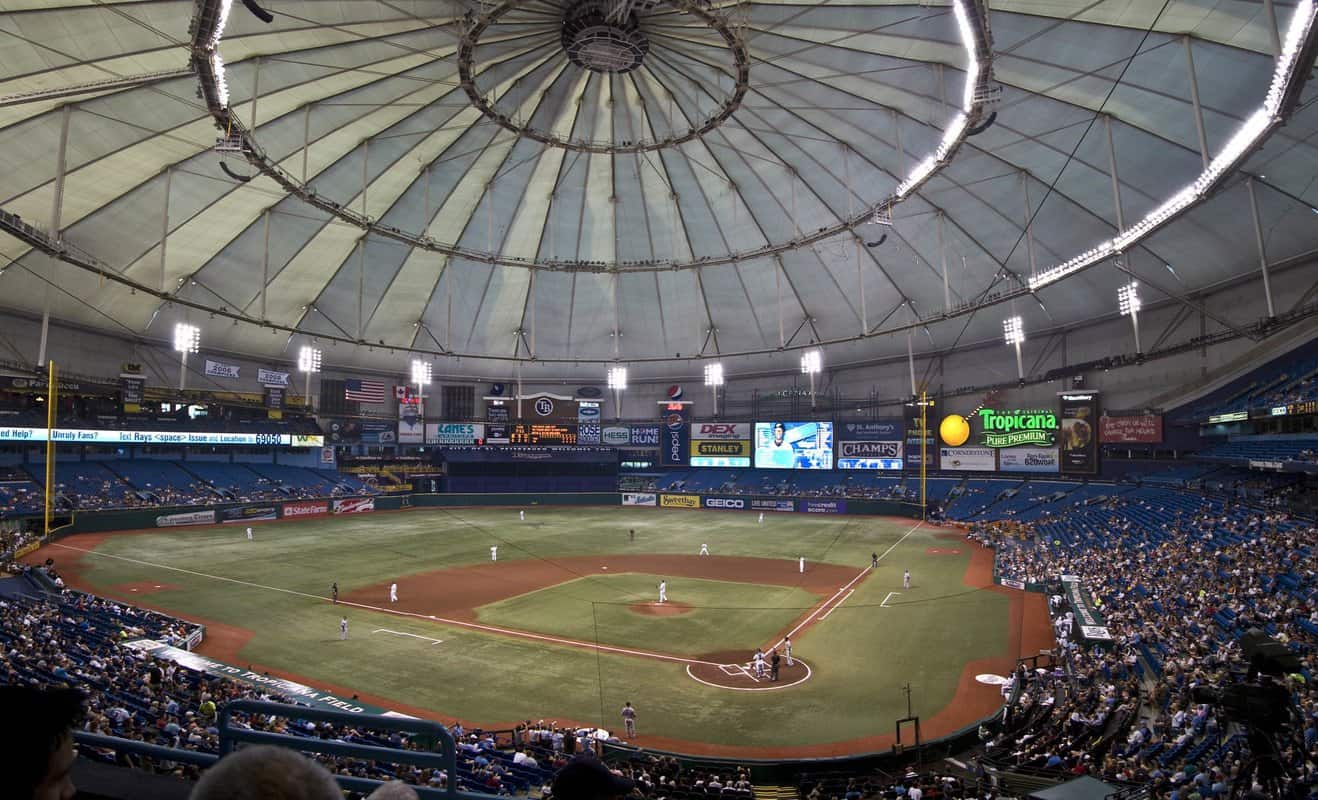 Bullpens in Tropicana are set up in the foul territory of the outfield, very close to the field of play.

This is hazardous for outfielders chasing down fly balls, as well as relievers warming up.

Most stadiums decades ago placed bullpens in this location.

However, with increased focus on player safety, modern bullpens are located on the far side of the outfield fence, making Tropicana’s bullpens a not-so-endearing anomaly.

Baseball has been decried as a “boring” game by the more constantly stimulated younger generations.

Fewer people can sit down and drink in a ball game from first pitch to final out as in decades gone by.

To appeal to a modern audience, contemporary parks are built with expansive amenities, with some lavishing fans with night clubs and swimming pools.

While fans can definitely get a beer and a dog at Tropicana, it is not the all-encompassing entertainment ambiance seen in stadiums built in the new millennium.

In addition to the dark, gloomy atmosphere that pervades Tropicana, it is generally a bit of an eyesore as a facility.

Giving off the appearance of a giant cylinder in the midst of an industrial area in desperate need of improvement, Tropicana does not appeal to visitors from a streetside view.

Possibly due to the lighting issues, the infield turf–which finally got updated several years ago–has a constant drab yellow appearance that misses the vitality of a sporting contest.

A centerfield entrance adds an element of inconvenience for fans, as it is located as far away as possible from the majority of seating.

This creates congestion in the walkways as floods of people make their way from centerfield toward the backstop or down the first and third lines.

There was significant community backlash surrounding the construction of Tropicana Field when work started in 1987.

At the time, the area had not even been awarded an MLB franchise (the Rays came along in 1998), so there was confusion as to why the area needed a facility of Tropicana’s magnitude.

Then there was the troubling fact that some 800 people were displaced from their homes to make the stadium a reality.

As many of these people, as well as their friends and family, have remained in the area over the years, the stadium is remembered for the hardship it caused.

Finally, construction revealed harmful chemicals in the soil of the build site, requiring millions of taxpayer dollars to help clean up.

All in all, the stadium has been met with more opposition than most ballparks, and the resentment has kept bad vibes over its head throughout the years.

To learn more, you can also read our posts on why Planet Fitness is so bad, why people watch sports, and why soccer is so boring.

Tropicana Field in the Tampa/St. Petersburg area is widely viewed as the worst stadium experience in baseball.

From a terrible location to outdated design, poor lighting to long held community resentment, Tropicana has a number of issues that detract from the overall baseball experience.

Why Is Sherwin Williams Paint So Expensive? (9 Reasons Why)

Why Is Baseball So Boring? (11 Reasons Why)