Why Is My Computer Fan So Loud All Of A Sudden? (11 Reasons Why) 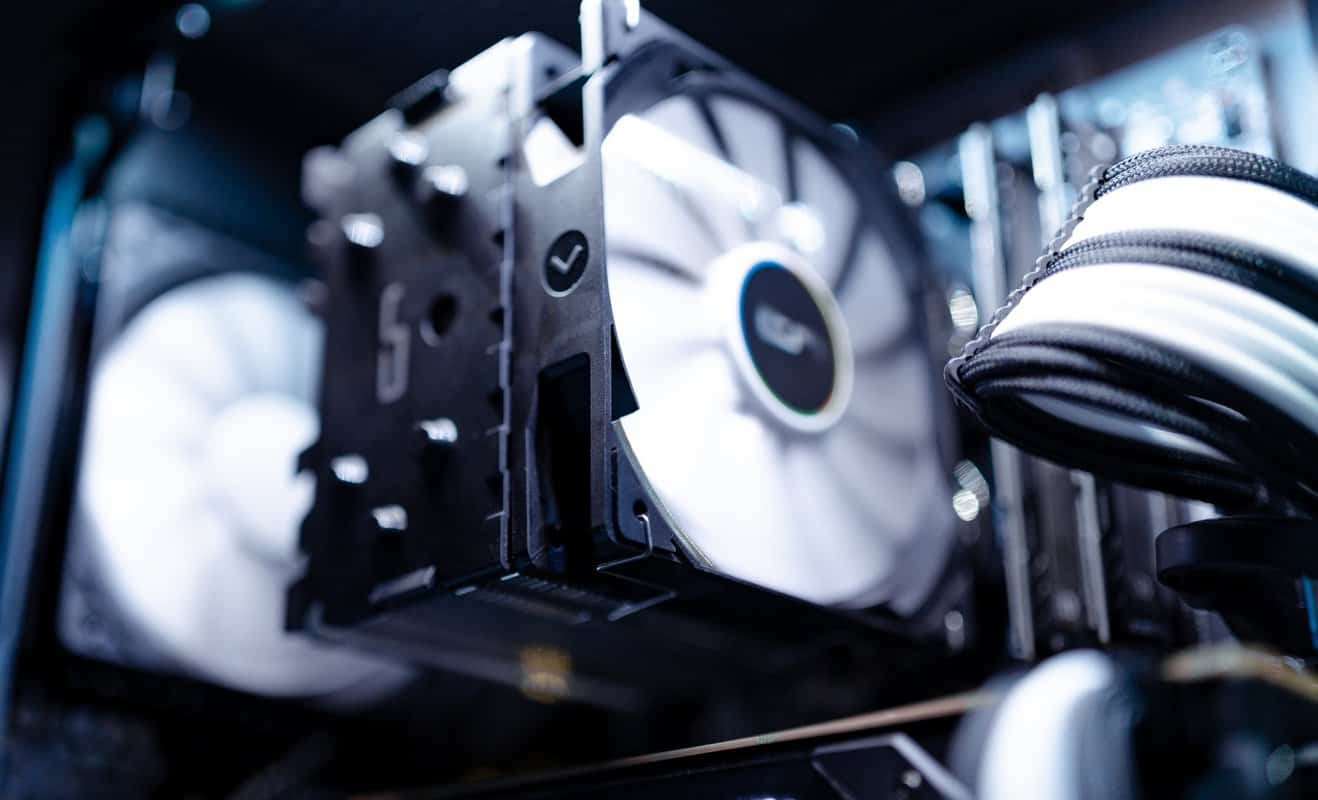 We spend so much time on our computers these days that the slightest change in speed or decline in performance is immediately noticeable and a cause for urgent action.

While it may not directly affect your productivity or gaming session, a loud fan deserves immediate attention. Here are 11 reasons why your computer fan is so loud all of a sudden.

Why Is My Computer Fan So Loud All Of a Sudden?

1. Excessive Dust On The Fan

One of the most common reasons why a computer fan can become loud is because it is too dusty. Excessive amounts of dust on the blades can cause the fan to work harder, becoming louder as a result.

To remedy this situation, it will be necessary to clean the fan by removing the dust and grime from the blades, the housing, and the casing. Here are a few key steps to follow:

Because of how they work, dust naturally settles on the blades and housings of computer fans. If your computer fan is making a loud noise, you would be well-advised to clean your fan as soon as possible.

2. Restricted Airflow Around Your Computer

Another common cause of a computer fan making loud noises during operation is having your computer in a poorly ventilated area. Computers are best placed in cool locations with good airflow around them.

Because computers naturally generate heat as they are used, they need to be placed on a hard surface with a good amount of clearance on all sides, including the top (a minimum of 2” all around if possible).

Placing large objects right up against your computer can block vents as can positioning your computer inside an enclosed space, like in a desk cabinet.

These conditions can cause poor ventilation which will cause your computer to overheat and your computer fan to become louder as it struggles to keep vital internal components working properly.

During operation, heat can accumulate inside the computer cabinet, and it is the fan’s job to circulate the air so that the warm air can be forced out through the vents and cooler air brought inside.

If these openings are obstructed, then the warm air inside the cabinet will be trapped because it has nowhere to go. This will force the fan to work harder to create airflow and become louder as a result.

Because the fan is struggling to ventilate the environment inside the computer, vital components like the hard drive, CPU, GPU, and other sensitive parts, can be subjected to dangerously hot conditions.

A loud computer fan is not only annoying, but it can be a warning sign that your computer is at risk, so check those vents and grills and make sure that they are clear and unobstructed.

4. Your Computer Is Infected

Your computer fan running loudly may also be a sign that your computer has been infected by some form of malware, particularly if the noise level increases suddenly and seemingly without reason.

Certain types of malware are designed to hijack your personal information and hunting for valuable data to steal can consume a lot of your computer’s resources thus causing your fan to rev higher.

There are also specialized forms of malware that take over your computer and use it for crypto mining, which is an intensive operation that pushes components like the CPU and GPU to their limits.

If your computer fan runs loudly for no apparent reason you may want to perform a detailed malware scan to make sure your system is not infected.

5. Restricted Airflow Inside Your Computer

Maintaining proper airflow inside your computer is also important and anything that restricts the outflow of warm air and inflow of cool air can cause your computer fan to become louder.

Even a few misplaced cables or poorly positioned components can make a huge difference in the circulation of air inside your computer and the performance of your computer fan.

Sometimes the loud noise made by fans is caused by the blades hitting something or the fan housing vibrating against adjacent objects. Check the inside of your computer for anything that is out of place.

6. Your Computer Is Being Overworked 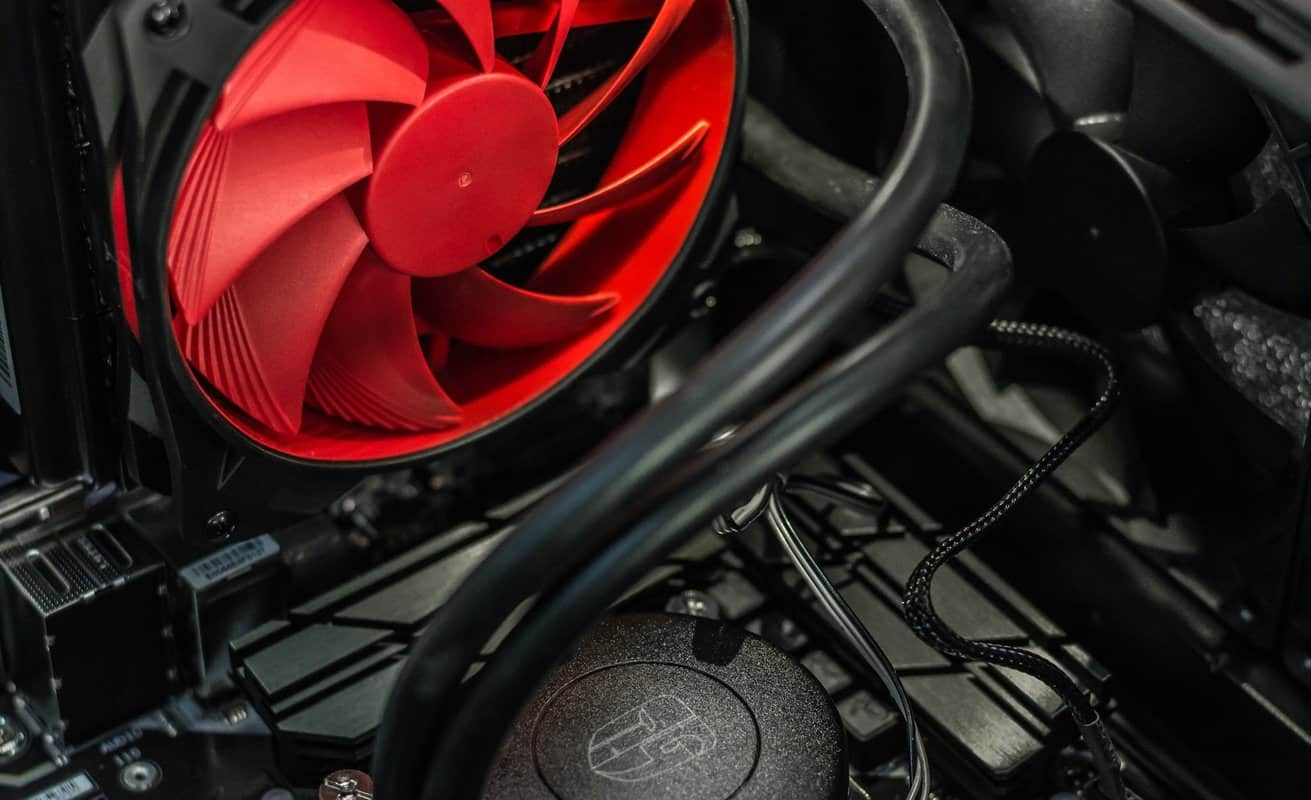 A loud computer fan can also be a sign that your computer is being overworked. The CPU and GPU can generate a lot of heat through sustained use and the fan will run at full throttle to keep things in check.

Here are a few conditions that can be overly taxing on your computer and its fan:

If you notice your computer fan making a loud noise, you may want to open up your task manager and look at what operations are taking up the most resources.

It may be a good idea to close applications that you are not actively using to give your computer fan a much-needed break.

Every computer relies on BIOS (Basic Input/Output System), or in the case of newer computers, UEFI (Unified Extended Firmware Interface), to boot up the entire system.

BIOS is what enables your computer’s operating system to communicate with hardware and devices like a keyboard, mouse, hard drive, printer, and various types of adapters.

It also controls your computer’s fan and if the BIOS is outdated or somehow corrupted, it can result in the fan malfunctioning such as operating too loudly.

A simple cure is to reload your computer’s BIOS or upgrade to the most current version available.

A loud computer fan may not necessarily indicate a problem with the fan or your computer’s vital components. In fact, it could simply be an indication that something just needs to be tightened up.

Your computer is actually a chassis with various components that are screwed in or bolted onto any number of slots or bays. Enclosing the entire thing is a computer case or cover.

If any screws or bolts are loose, or if there are any stray cables, the operation of the computer fan can cause natural vibration which can produce a lot of noise akin to a loud humming or buzzing sound.

9. Your Computer’s Fan Is Undersized

Another reason why your computer fan has become louder is that it is undersized for your system. This would especially be the case if you made recent upgrades like a faster processor or a new GPU.

If your fan is unable to adequately keep your computer cool despite running at full throttle, then you may be best served by upgrading to a more powerful one. Your computer and your ears will thank you.

Sometimes the reason why a computer fan operates loudly is that other cooling measures are not functioning properly, thus forcing the fan to compensate and work harder.

For instance, you may have noticed that certain parts of your computer have metallic fins protruding from them. These are known as heat sinks and their job is to dissipate heat from various components.

CPUs in particular rely heavily on heat sinks to keep them from overheating. Thermal paste plays a key role in this process by serving as a conduit of sorts enabling the heat sink to perform more efficiently.

As thermal paste ages, it loses its ability to conduct heat to the heat sink and this can lead to the CPU overheating. These circumstances can cause the computer fan to get louder as it runs full throttle.

11. It Is Time For Fan Replacement

As obvious as it may seem sometimes the answer is right in front of you. If your computer fan gets unusually loud all of a sudden, it could mean that the fan is on its last legs and needs to be replaced.

Like their larger counterparts, computer fans have motors and bearings. These parts can wear out over time and when they do, the rotation of the blades becomes more labored – and much noisier.

Because it runs constantly whenever the computer is on, a fan can (and will) wear out over time. When replacing a computer fan make sure it is compatible with your system in terms of size and airflow.

To learn more, you can also read our posts on why Windows updates so often, why school computers are so slow, and why programming and coding are so boring.

When working away on your computer it is easy to become so immersed in the task at hand that you fail to notice changes in how it is performing. This includes the way that it sounds, which can be very telling.

A loud computer fan is more than just an annoyance. It could be an indication that your computer is trying to tell you that something is wrong so do not ignore the signs.

Why Are Geminis So Special? (11 Reasons Why)

Why Are Butts Attractive? (11 Reasons Why)