Why Are Most Quarterbacks White? (9 Reasons Why) 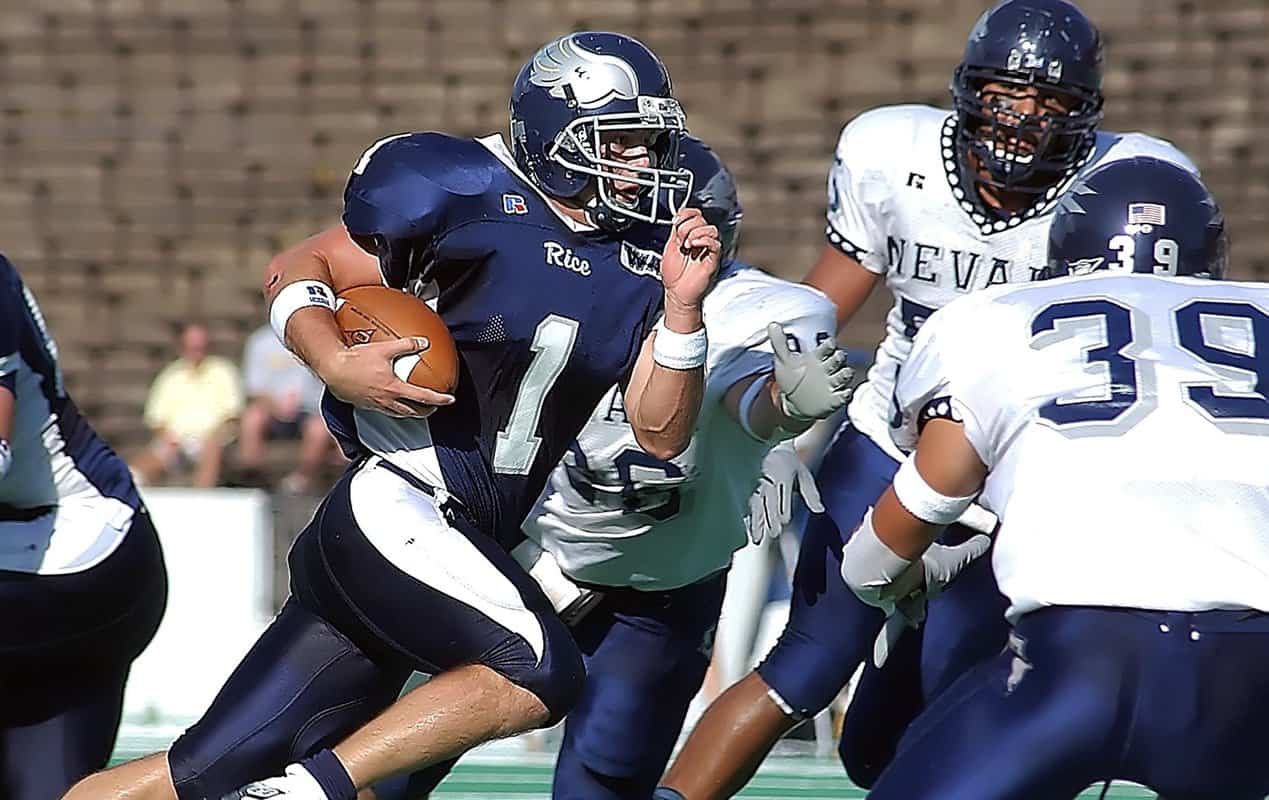 With 32 teams playing in the National Football League (NFL), one would expect diversity in the 21st century, but there’s one position with little diversity.

Why Are Most Quarterbacks White?

The NFL has a long and racist past. Early in the 20th century, coaches like Glenn “Pop” Warner shaped the game to be what we know today but also upheld racist beliefs of the period.

History and tradition play a significant role in why there are more white quarterbacks than any other race in professional football.

African-American players were allowed to play in the 1920s, but anyone rarely held a prominent position like a quarterback. In addition, only one Black coach served in the league at that time.

Due to Jim Crow laws and segregation, non-white players faced significant disadvantages in getting the chance to play football, much less be the quarterback.

A pervasive myth has circulated that white players had more upper body strength and, therefore, could throw further.

Additionally, coaches long believed that a white quarterback could make better decisions on the field and command more respect from his team.

These myths prevented the league from having many non-white quarterbacks for decades, and the problem persists to this day.

Many old coaches still believe that white players can throw more accurately and further while Black players could run faster for longer.

One reason there are more white quarterbacks is socio-economic factors. White players are more likely to come from families with more money.

This would produce more prepared white quarterbacks. Non-white players are disadvantaged in this regard and less prepared by the time they get to college football.

Most quarterbacks are drafted from the university they attend and play for, so if a player cannot afford to attend, they won’t stand a chance in the draft.

Even with scholarships and financial aid, socio-economic factors prevent many talented athletes from attending the university of their choice.

Heisman Trophy winners come from universities with top-tier football programs. Today, we see more players of color in top programs, but that wasn’t always the case.

Educational opportunities and attending a school with a ranked football program are significant factors in draft picks. Non-white players do not have this same advantage as white players.

This can also go back to high school and jr. high. For example, Texas has high schools with multi-million dollar sports complexes that rival NFL standards.

Urban and poorer school districts cannot possibly measure up to the same training and equipment provided by the wealthier schools.

The demographics in the areas where multi-million dollar training facilities were built tend lean toward more white and upper-middle-class suburban families. 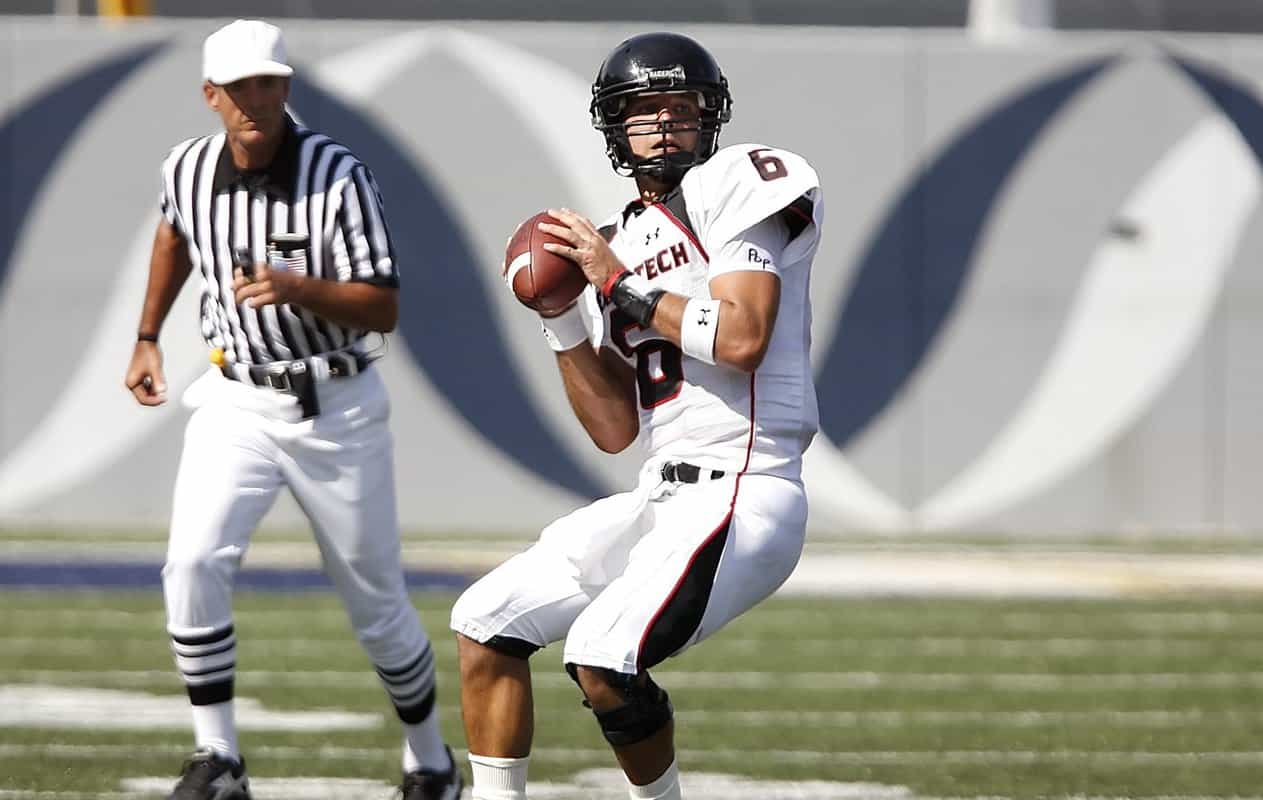 There is a disproportionate number of white coaches in the NFL, and they prefer white quarterbacks. This is the culture of the NFL.

Some coaches are old-fashioned racists and do not agree with having a quarterback who is not white.

The coaching staff is a huge reason there are primarily white quarterbacks in the NFL, but the league is cracking down.

For example, Las Vegas Raiders coach Jon Gruden was forced to resign for his racist and misogynistic emails.

Coaching culture in American football is a significant factor in why there are mostly white quarterbacks.

Black quarterbacks are criticized more for their play calls and decisions. As a result, they face more scrutiny from the media.

Non-white players are often not trying out for quarterback because of their self-doubt. But, again, this results from factors mentioned – racism, scrutiny, tradition, etc.

Bullying from other players may also contribute to self-doubt and imposter syndrome in non-white players.

8.  Pushed To Be Receivers

Coaches often push black players in their youth to be receivers and running backs. Bigger kids are pushed towards the defensive or offensive line.

White kids are more likely to be recruited to be quarterbacks at an early age. In addition, youth football leagues often have white dads coaching who want their sons to be a quarterback.

Non-white players are less likely to be recruited into trying out for quarterback and more likely to be pushed towards something else like receiver or lineman.

Anyone who knows American football knows that a scrambling quarterback is a liability on the field. Running the ball is when quarterbacks get hurt, and teams don’t want that.

Quarterbacks holding and running the ball present more liability to a football team because they’re more likely to get hit and hurt.

That is why Black quarterbacks are not drafted quickly as their white counterparts. White quarterbacks don’t carry the same level of liability.

To learn more, you can also read our posts on why backflip is illegal in figure skating, why baseball is so boring, and why New York has two football teams.

These 9 reasons explain why most quarterbacks are white. The NFL seems to be trying to progress into modern times of diversity and inclusion.

So far, however, there are still a disproportionate number of white quarterbacks, so much needs to be done to change that.

Why Are Ants Attracted To Me? (9 Reasons Why)