Why Is Magic Spoon So Expensive? (4 Reasons Why)

Normally, cereal is marketed as a children’s breakfast because most cereal is sugary and child-like. However, there are brands of cereal that have been making adult-friendly versions, such as Magic Spoon.

If you wanted to try Magic Spoon but noticed how much it costs, you may be curious why Magic Spoon is so expensive. I looked up the facts, and here is what I found!

Why Is Magic Spoon So Expensive?

Magic Spoon cereal is expensive because you have to purchase four boxes of cereal at a minimum, which is almost $40 in total. Additionally, Magic Spoon has effective marketing and branding techniques that have made it look like an expensive brand. Moreover, Magic Spoon’s healthier ingredients make it more costly to produce.

Do you want to learn more about why Magic Spoon is so expensive? I compiled a list of reasons, so keep reading!

Firstly, one of the primary reasons Magic Spoon is expensive is that you can never buy a single box of Magic Spoon cereal.

Instead, Magic Spoon only sells its cereal in four-packs, meaning you need to buy four boxes at a time.

Currently, you can buy four boxes of Magic Spoon in one flavor or an assortment of four flavors. However, there is no option to get two boxes each of two flavors.

Another huge reason why Magic Spoon can price its cereals the way it wants is because of branding and marketing.

That said, people are more willing to pay for products that have cool marketing techniques or have an exciting brand message.

For instance, Magic Spoon brands itself as a fun and healthy way for adults to enjoy cereal.

Further, most adults on diets tend to shy away from traditional sugary cereal, so Magic Spoon markets itself as a healthier alternative to cereal.

Also, Magic Spoon’s marketing and branding hit a nostalgic note in most adults.

Moreover, Magic Spoon has minimalistic yet child-like designs on the boxes, which helped its target market miss their childhood and make them want to buy Magic Spoon cereal.

For instance, Magic Spoon entices adults by stating they can enjoy their childhood cereal without the guilt of added sugar and carbs.

With that, this message stimulates consumers’ emotions, which makes them more likely to purchase Magic Spoon. 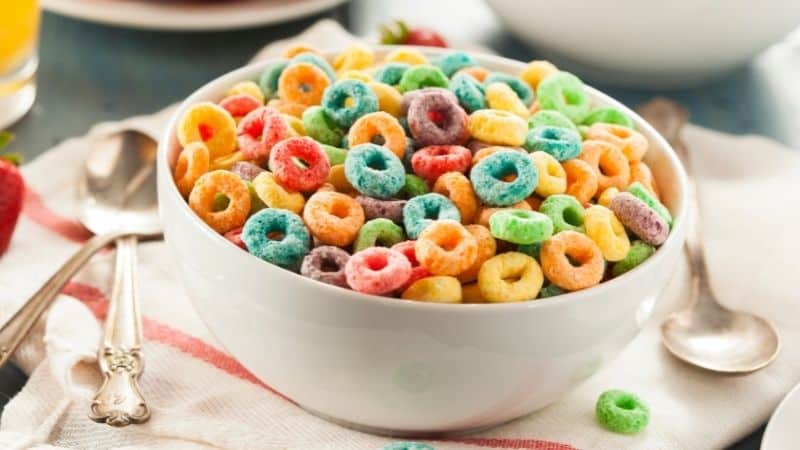 Further, this allows Magic Spoon to be sugar-free, which is a huge part of the company’s marketing campaign.

According to Magic Spoon’s nutritional facts, the cereal has zero grams of sugar.

Instead, Magic Spoon uses a mixture of steviol glycosides, monk fruit extract, and allulose to achieve a naturally sweet flavor.

As you can imagine, this costs more than using traditional sugar or artificial sweeteners.

Read More:  Why Is Popeyes So Expensive (11 Reasons Why)

Another reason why Magic Spoon costs more than other types of cereal is that Magic Spoon is safe for keto diets.

Also, other cereal brands use grains since grains are cheaper, but Magic Spoon adheres to keto diets by using alternative ingredients.

Is Magic Spoon Worth It?

Magic Spoon being a cereal worth buying will mostly be up to your discretion, as not everyone is willing to pay a lot of money for cereal, so they may not want to try Magic Spoon.

However, Magic Spoon can be great if you want a low in sugar, gluten-free, and keto-friendly cereal. Therefore, some adults may find Magic Spoon worth the extra money.

Still, if you do not mind consuming extra sugar or carbs, you can stick to regular cereal at the store.

Also, if you are allergic to gluten, there are more affordable gluten-free alternatives to Magic Spoon, such as Rice Krispies or Cheerios.

Is Magic Spoon Too Good To Be True?

Magic Spoon cereal is said to be “too good to be true” because it offers tasty cereal with a healthier twist. While some people love Magic Spoon, not everyone feels the same.

Read More:  Why Is Babybel Cheese So Expensive? (11 Reasons Why)

For instance, some people do not like Magic Spoon because they say the cereal has a bitter aftertaste.

With that, Magic Spoon’s bitter aftertaste is likely because it contains stevia as a sweetener, which has a bitter taste despite being a natural sweetener.

However, some people prefer Magic Spoon cereal over most commercially bought cereal brands.

Generally, a bowl of Magic Spoon cereal only has 110 calories, making Magic Spoon a better option for people on caloric deficits.

Generally, Magic Spoon is expensive because you can only buy four boxes of Magic Spoon, making you spend a lot of money at once.

Currently, there is no option for you to buy a single box of Magic Spoon cereal.

Additionally, the branding and marketing techniques Magic Spoon adds to the price.

So, since the marketing and branding effectively boost the brand’s image, Magic Spoon can make its cereals more expensive.

Why Is Gymshark So Expensive? (11 Reasons Why)

Why Is Manuka Honey So Expensive? (7 Reasons Why)

1 thought on “Why Is Magic Spoon So Expensive? (4 Reasons Why)”