Can You Recycle Meat Trays? (Don’t Make These Mistakes) 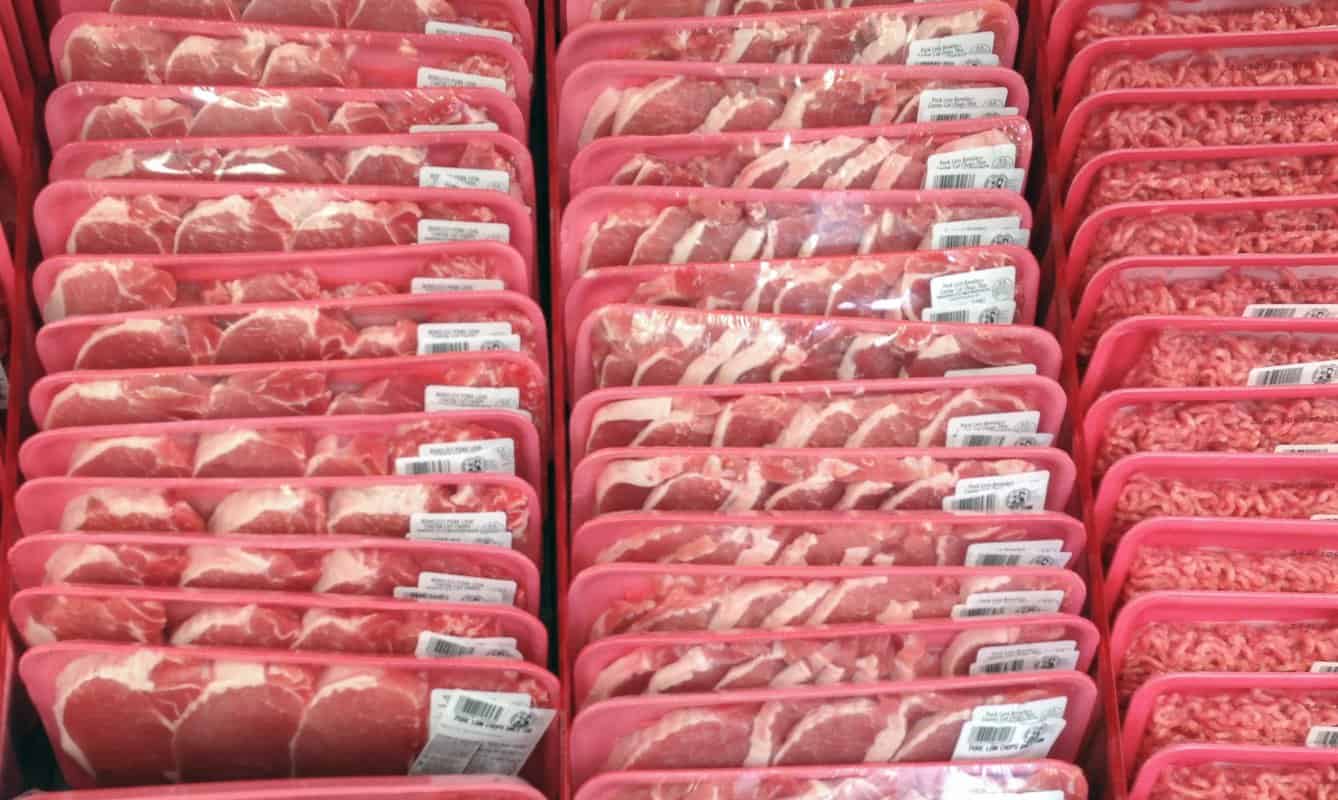 If you have ever visited the meat department at most grocery stores, you have probably noticed that the meat comes packed on top of a plastic pad in a foam tray with a plastic wrap keeping it all contained, that is a lot of plastic for one item.

So the big question is, with all that plastic, can any of it be recycled? Continue reading to find out this answer and more!

Can You Recycle Meat Trays?

Unfortunately, meat trays and the other materials used to package meats cannot be recycled the same as other plastic materials you may put in your curbside bin. This is due to not only the type of plastic used but also because the packing materials come into direct contact with meat which contaminates it.

Keep reading to find out exactly why meat packaging materials cannot be recycled and what other steps you can take to avoid those packages.

What Are Meat Trays Made Of?

There are three main components that make up the packaging for most meats.

The first is the meat tray, then there is also a plastic cling wrap that encompasses the meat, pad, and tray to keep them all together.

The meat trays are made of plastic foam and this foam is most similar to what people think of as Styrofoam.

However, the technical term of the material is expanded polystyrene or EPS.

Furthermore, most recycling plants will refer to it as “#6 Plastic- Expanded”.

Additionally, because of the type of plastic these meat trays are, most recycling plants do not accept them.

Therefore, you should not put them in your curbside recycle bin but rather your regular garbage.

The purpose of the absorbent pad is to keep the meat fresher for a longer period of time.

This is because the pad soaks up all of the juices from the meats in the package.

Without the pad, the meat would become more susceptible to bacteria that can make it go bad and also cause sickness if you were to still ingest the meat that has gone bad.

This absorbent pad also helps keep the package less messy by soaking up the liquids coming from the meat rather than letting it pool and drip out.

However, this absorbent pad is not recyclable.

Furthermore, the plastic pads are generally made from silica gel, purified sand, or cellulose…then coated in a non-toxic, perforated plastic wrap.

Since they are made of these materials, the pads are not currently accepted as being able to be recycled.

Therefore, the absorbent pads should be put in the garbage.

While the plastic cling wrap is technically able to be recycled, it is still not accepted at most recycling plants.

This is because the plastic wrap can get tangled in the sorting and other equipment, causing costly problems for the company.

Furthermore, the plant would have to shut down while workers untangled the plastic wrap from the equipment.

This is not only expensive for the company but potentially dangerous for the workers who are doing the untangling.

Are Meat Trays Bad For The Environment? 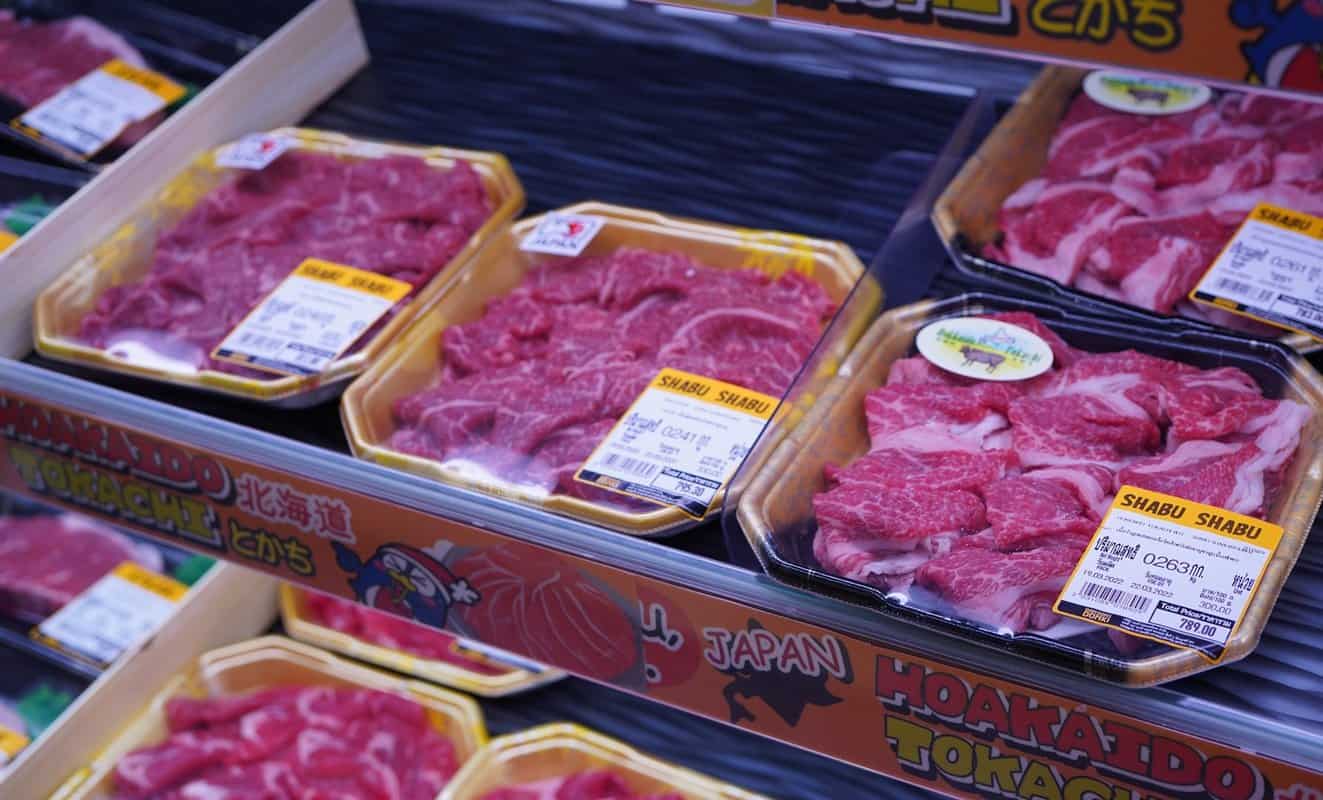 Meat trays and the other components of meat packaging are not able to be recycled and should instead be thrown in the garbage bin, because of this, they are bad for the environment.

There are two main reasons that meat trays cannot be recycled and are therefore bad for the environment.

This is because of the materials that the meat trays and packaging are made up of and the fact that they come into contact with raw meat.

As listed above, the meat trays in meat packaging are made of plastics #6 and are not accepted at recycling plants.

Furthermore, the absorbent pad is a mesh plastic filled with various materials that, once again, are not accepted at recycling plants.

Additionally, the plastic film that encompasses the entire package is harmful to the equipment and should also avoid your curbside bin.

Therefore, these three plastic products should not be placed in your curbside recycling bins but rather in your garbage bins.

All three components of meat packaging come into direct contact with meat.

This means that all three are now contaminated and bacteria will eventually start to grow on them and could spread to other materials at the recycling plant if they were brought in.

Furthermore, having contaminated products at the recycling plant would mean even more plastic would have to be thrown in the garbage as it would also be contaminated.

Also, the threat of cross-contamination is serious as it could spread bacteria that could cause illnesses for those who come into contact with it.

Therefore, it is best to dispose of meat-contaminated items in the garbage.

Most meat trays found in regular grocery stores are not biodegradable.

However, more and more stores are making the commitment to making more environmentally friendly options, so because of this, you may start seeing biodegradable meat trays soon!

Additionally, some websites, such as Ecoproducts, sell compostable meat and produce trays.

How To Dispose Of Meat Trays

Since meat trays and the other materials used to package meat are not recyclable, they should be thrown in your regular garbage bins rather than any container meant to be used for recycling.

How To Reuse And Upcycle Meat Trays

While you can’t reuse or upcycle the contents of meat packaging, there are alternatives to that packaging that you can pursue.

Furthermore, these alternatives will allow you to avoid having to use meat trays and other materials at all, thus reducing the waste that ends up in landfills.

Bring Your Own Container

A reusable glass container is a much better option than the plastic foam meat trays or even the packing paper that butchers use.

Furthermore, while not all grocery stores will allow you to bring your own glass container for them to put the meat in, it never hurts to ask.

Moreover, you will probably have better luck trying a small or locally-owned grocery store than you would a large chain.

If a grocery store is not willing to accommodate you wanting to use your own container, you may want to try a local butcher.

Furthermore, a butcher generally owns his or her own business and may be more willing to work with you, especially because it would help cut down on their cost of supplies.

While the three components of meat packages, including the main meat trays, are unfortunately not recyclable, the reasons behind it are meant to keep you and others safe. Therefore, to limit your footprint, you can ask your local butcher to allow you to use glass alternative containers.

Furthermore, because of the threat of meat cross-contamination, always be careful when handling meat trays or any other part of the meat packaging and only allow it to come into contact with the garbage.

Can You Recycle Black Plastic? (Don’t Make These Mistakes)

Can You Recycle Metal Water Bottles? (Your Full Guide)